Saturday night in Oslo this weekend was filled with live music of all sorts. The Hollies played at Sentrum Scene, Folkelarm with lots of folk musicians was held at the National stage for folk music, Team Me played at Rockefeller, Krokofant at Victoria, and at Youngstorget the bar/club Bonanza celebrated their 5 year anniversary in a big tent with live acts from Thursday through Saturday. I saw two of the bands there and saw Team Me in between. (Picture above: Erlend Hjelvik from Kvelertak) 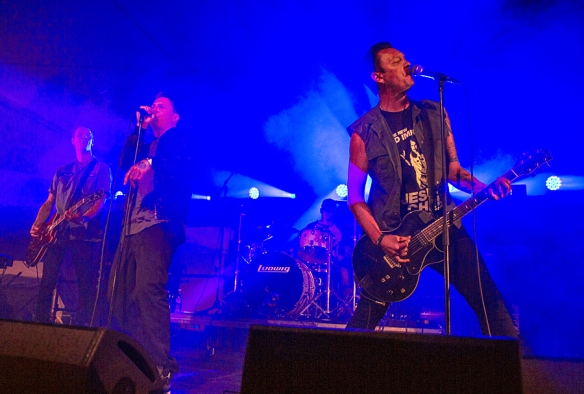 The first band I saw at the Bonanza party was OnklP & de Fjerne Slektningene (UncleP and the distant relatives). But since the concert was delayed and Team Me started at Rockefeller a few minutes into their show, I just managed to see one and a half song with them before I had to run.

OnklP & Slekta, as they call themselves, have just released a new song, Styggen på Ryggen that has got rave reviews. specially because of the very personal lyrics about anxiety. I saw the band at Steinkjer earlier this year, and will try and see them again when I don’t have to run.

Team Me is a hard working that was discovered through NRK’s music site for unsigned bands, urørt (untouched) in 2010. They played several festival that same year, and in 2011 they were signed to Bylarm and the Great Escape. In 2012 they played at SXSW in Austin, and NME picked them out as one of their 10 new favorite bands from the festival.

Team Me’s debut album, To The Treetops, was released in the fall of 2011, and the band won a Norwegian Grammy in the Best Pop Band of the year category for this album. They also got rave reviews for the album and got higher billing on even more festivals. This year they reeleased their second album, Kick & Curse, also to great reviews.

The band’s music is intense, poppy, happy, and with a filled out soundscape. Their stage show is much the same, lots of light and colors, a positive spirit, and much energy. Team Me is a band to be happy with, contrary to many of the other indie bands these days. Rockefeller was almost filled, with many hardcore fans.

After Team Me at Rockefeller, I went back to the tent to see Kvelertak. I have written about them in another blog post here. This was the third time I saw them this year, the other two were at the Tons of Rock and the Pstereo festival. I never get tired of Kvelertak. They have an energy that is contagious.

During the almost 5 years I have observed Kvelertak, they have developed to a fantastic live band. Front man Erlend Hjelvik is an impressive stage personality with his bare chest and long hair. The rest of the band make sure that the sound is super tight, but at the same time dynamic and varied.

This year Kvelertak have been on tour with Mastodon and Gojira, and in October and November they will tour North America with the same two bands. You’ll find tour dates on the band’s website. Check out when they visit your town and go see them. That’s an order!

All pictures are © Per Ole Hagen and must not be used wthout written permission.

1 thought on “UncleP And The Distant Relatives, Team Me and Kvelertak”