Thom Hell is one of my favorte Norwegian pop artists and songwriters. He is not in the front when we talk abut new styles, but leans heavily on the master songwriters from the 60’s and later. But he writes some really catching songs, and to me that is often enough. Now he has released his 8th album, Until This Blows Over.

From Thom Hell’s release concert for Six in 2014

I don’t really remember when I heard Thom Hell the first time. But I have listened to his albums since the start, about 10 years ago, and have seen him live several times. He does some really good stuff live, but I must admit I like his albums even better. Having grown up in the 60’s with Paul Simon, Paul McCartney and other great songwrites as my own soundtrack, it is a pleasure to hear newer songwriters who are follwing in their footsteps. Thom Hell is one of them.

There is a big distinction between being inspired by and to plagiarize. Thom Hell has shown through several albums that he masters the art of making music you think you have heard before, but with a personal twist that makes it instantly likeable. On first listening Until This Blows Over sounds like an old friend coming back. 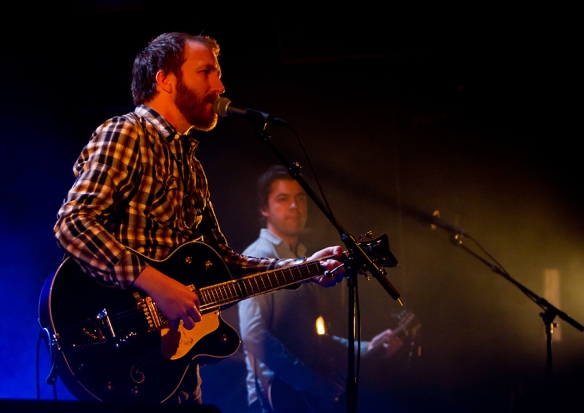 From a Tom Waits tribute concert at Rockefeller, Oslo, 2012

If you are new to Thom Hell, I can recommend you to start with All Good Things from 2010. On this album his style has mature and there are som gems there, like the easy flowing Love Is Easy, his duet with then girl frind Marit Larsen on ‘Til That Day Was Gone, then jump to the album God If I Saw Her Now from 2008 and Don’t Leave Me Heather, the most blatant Paul McCartney pastiche I have ever heard.

Until This Blows Over is a worthy successor to Thom Hell’s earlier albums. There is little new in terms of a change of style, and some critics might dislike this, claiming there should be a development from album to album. I am claiming the opposite, that sometimes, the sheer quality of the songs themselves is more than enough. A song like Ride Along is a good example of this, likewise Time.

From the Norwegian Wood festival in Oslo 2005

One of the qualites of Thom Hell, is his arrangements, and specially the vocal arrangements. They are more subtile than in your face, and with some realy delicate harmonizing. Just listen to the vocals on It Will Never Be Right and you’ll see what I mean. There is almost a Beach Boys feel to this song.

Until This Blows Over by Thom Hell isn’t a groundbreaking album, but it is an album that shows that he still has the ability to make good songs and to present them in a way that makes me want to listen to it many times. It also made me go back to his other abums to rediscover songs I haven’t heard for a couple of years.

All photos are © Per Ole Hagen and must not be used without wrtten permission.