I have a special respect for artists and musicians who transcend the borders between musical styles and who also make it hard for music librarians to categorize in an easy way. Jamie Cullum is such an artist, who moves  between jazz and pop with no obvious difficulty. He is only 34 years old, but has been recording since he was 19, and playing publicly even before that. 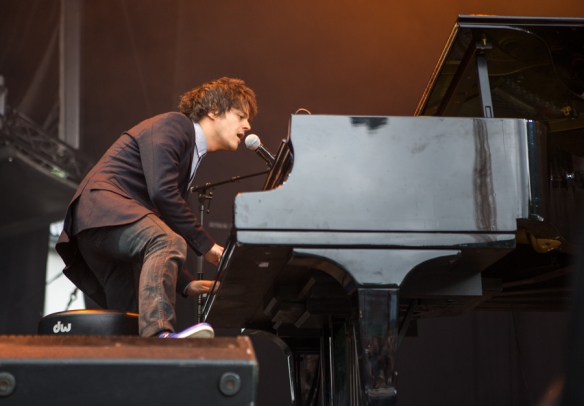 I have seen Jamie Cullum live twice, at the Molde International Jazz Festival in 2009 and at Bergen Fest in June this year. It is fitting that the first occasion was a jazz festival,m while the other was a pop festival. It goes to show that he caters to w wide audience.

At the Molde Jazz Festival in 2009 Jamie Cullum talked about his background where he played piano and sang at the Hurtigruten, a coastline that travels the coast in Norway from Bergen to Kirkenes. I don’t remember how long he worked there, but he certainly got his share of requests from middle aged Norwegian women. When you see Cullum on stage, it is obvious that this background has influenced his show.

Usually when I photograph concerts, artists who sing while playing piano are the most difficult to photograph, since their capability for posing is so limited. So not for Jamie Cullum. He has understood that as an artist he also has an obligation to make a good show, and he jumps from the piano, runs around on stage, and in Bergen he also had a drum that he banged on while singing.

From the Molde International Jazz Festival 2009.

Jamie Cullum’s breakthrough came in 2003 when he visited Michael Parkinson at BBC 2. This resulted also in massive sales of his album that year, Twentysomething, which made him the biggest selling Jazz artist in the UK of all times. The album is recorded almost entirely live in studio, on analogue tape, and is a perfect mix of jazz standards and pop/rock songs that is typical of Jamie Cullum.

A live concert with Cullum is a show of musicianship, a lot of energy, and also flirting with the audience. His background from Hurtigruta and piano bars is evident, making him fluent in between-the-songs-bantering. He has understood that piano artists can be boring live, therefore he does some songs without the piano, he jumps back and does a solo, he bangs on the drum, and he jumps from the piano. 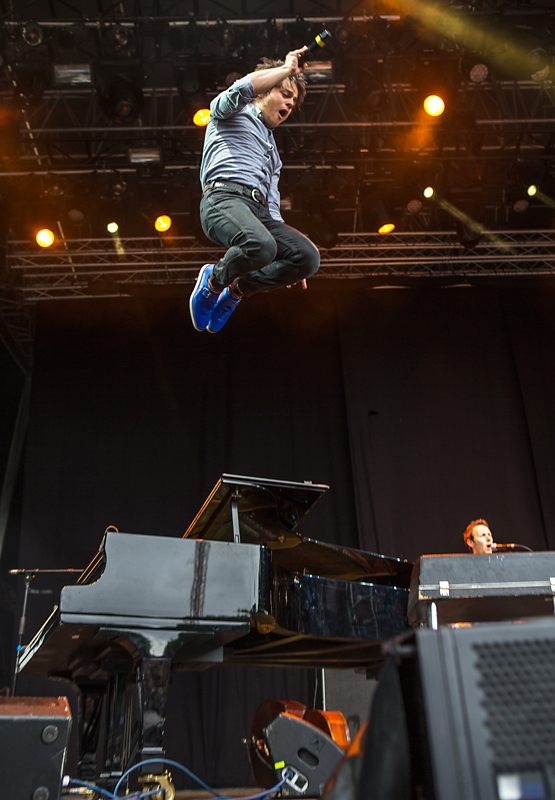 The first time I saw him, I had on the wrong lens when he jumped, so I didn’t get a good shot. It was blurry, too 😉 When he played at the Bergen Fest, I was better prepared, and true to form, he jumped. He jumps hight, too. But if he wasn’t such a good musician, these effects would be just that. Together with his songs, his great singing and playing, t makes for a great show. 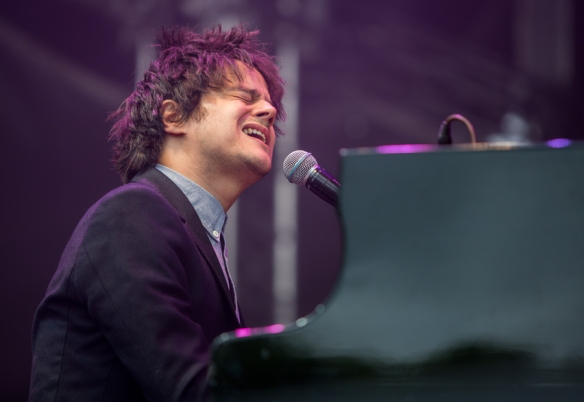 Jamie Cullum has won many awards for his music, and in 2009 he and Clint Eastwood was nominated for a Golden Globe Award for Best Original Song for Gran Torino, the title song to Clint Eastwood’s movie. HIs latest CD is Momentum that was released this year.

All pictures, except one, are from the Bergen Fest in 2013, and all are © Per Ole Hagen and must not be used without written permission.