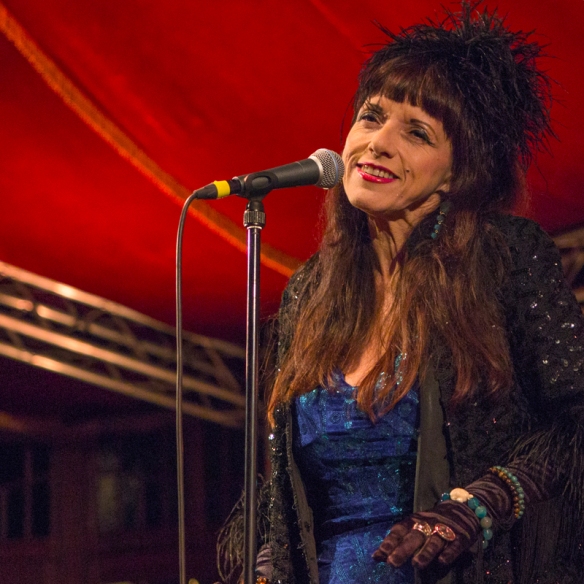 One of my favorite festivals started yesterday. Or rather, they started on Thursday, but yesterday was the official opening. with a full blues night on two stages. When one of the stages is a Magic Mirror tent, you can’t complain about the venue. There is also nothing to complain about with the artists, on the contrary. And for the nimble-minded, Hell is a place in Norway, and it means a cave in the mountain side, not a hot place somewhere else! (Picture above. Candye Kane)

As usual on festivals it is impossible to cover all of the concerts, since the concerts at Hell go semi-parallel on two stages. That means prioritizing, and I must admit I did choose bands and artists I know I like, or I presumed I would like in favor of some of the others. But the advantage of these two stages is that you can see both the acoustic acts and solo artists in the acoustic tent, and the electric and more noisy ones in the Magic Mirror. 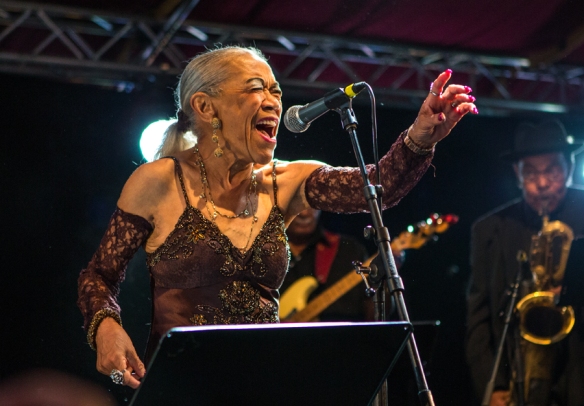 Every year the festival selects a person as the Ambasador of Hell. This year Sugar Pie DeSantos will join the rank of earlier ambassadors. She also played the opening show in the Magic Mirror, and I was impressed by her agility on stage. Sugar Pie is definitely not a spring chicken, but she behaves like one. Her band was also very competent, backing her up on her blues rhythm and blues repertoire.

A quick tour over to the acoustic tent to see Women in Blues, Rita Engedal and Margit Bakken, this time together with Angela Brown. Rita and Margit are doing a good job of putting the light on the female artists in the blues history.

After Sugar Pie DeSantos and the Ladies in Blues it was back to an hour with Carolyn Wonderland, her band and their special guest Guy Forsyth. Carolyn played in Hell in 2008, and the audience wanted her back again. The combination with Guy Forsyth was an extra attraction. I have seen both Carolyn with her band and Guy Forsyth with his band numerous times the last 10-15 years, and I have also seen them together in more informal settings.

The package they performed yesterday was new to me, and it added that extra touch to each ones’ songs. Guy played harmonica or guitar on many of Carolyn’s songs, and she and the band followed him on his songs. Songs like Guy Forsyth’s Red Dirt and Carolyn Wonderland’s Judgement Blues both got that extra touch you get when you add an instrument played by such excellent musicians as they all are – Carolyn, Guy, Cole El Saleh on keyboard and key bass plus Rob Hooper on drums. We also got a new song by Carolyn Wonderland at the start of the set, with some great harmonizing by Cole and Rob. I am looking forward to when her new CD will be released. Guy Forsyth released a CD earlier in 2013, The Freedom To Fall. Check it out! 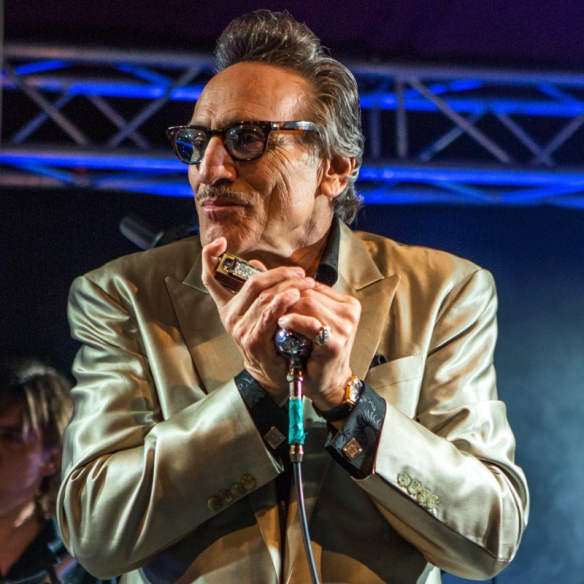 After Carolyn Wonderland and Guy Forsyth, Rick Estrin & The Nightcats entered the stage in the Magic Mirror. Rick is, together with Charlie Musselwhite and Kim Wilson from the Fabulous Thunderbirds one of the masters of the harmonica. He also plays the chromatic kind, and gets some amazing effects out of it. His guitarist is the Norwegian Kid Andersen, who played Musselwhite before joining Estrin. The band is super tight, and with Estrin’s virtuoso harmonica and good singing, everyone had a great time.

I saw Candye Kane at Notodden in 2002. Since then she has been seriously ill, and she has also lost a lot of weight. On stage after Rick Estrin, she was markedly less extrovert in her stage show than 11 years ago, but that made me listen more to her voice. She has an excellent voice that in a way reminds me of the music from the Andrew Sisters. I must admit that I got a renewed interest in her music, at this concert. Her music has a touch of rockabilly, the 40’s touch, some swing and a definite blues feeling. Her band was also excellent, with Laura Chavez on guitar, Kennan Shaw on bass, Kurt Kalker on drums and for the occasion reinforced with boogie woogis queen Sue Palmer on piano. Check out her new CD, Coming Out Swingin’. 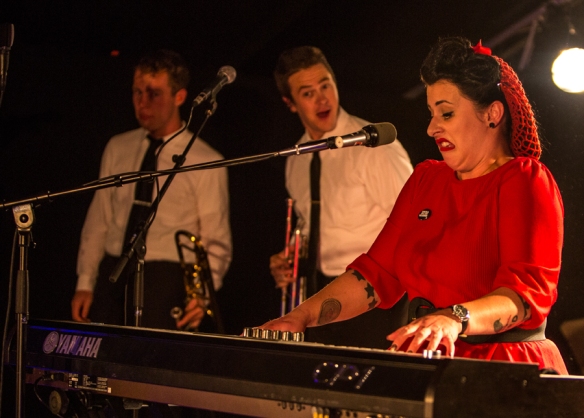 After Candye Kane I ran over to the acoustic tent again to see a little bit of Davina & The Vagabonds. Davina Sowers was an instant hit at Hell last year when she played two shows. Her style is piano blues, some boogie woogie, and a lot of raw humor, both verbal and in the music. She also makes the most of sitting at the piano, using her face to communicate with the audience. Davina & The Vagabonds are excellent entertainers and also excellent musicians. Well worth seeing. 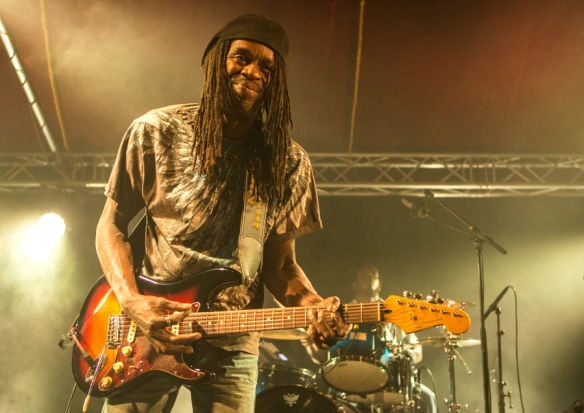 The last act Friday night was Bernard Allison, the son of the late blues legend Luther Allison. Bernard has established himself as a solid blues artist, and does not live in the shadow of his father. His music is straight forward, with some really delicate guitar licks. I always love listening to guitarists who know how to play fast, but who don’t have to do it all the time. Bernard Allison is one of those, and that adds an extra quality to his music. 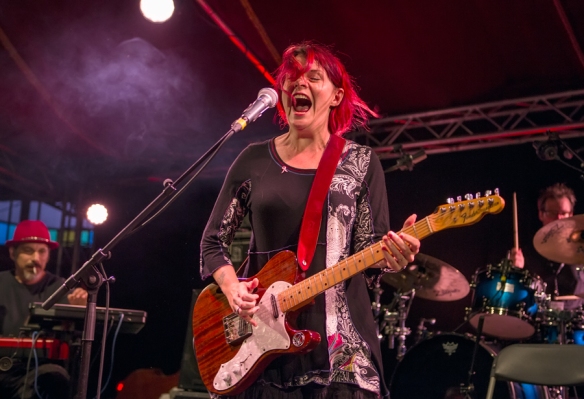 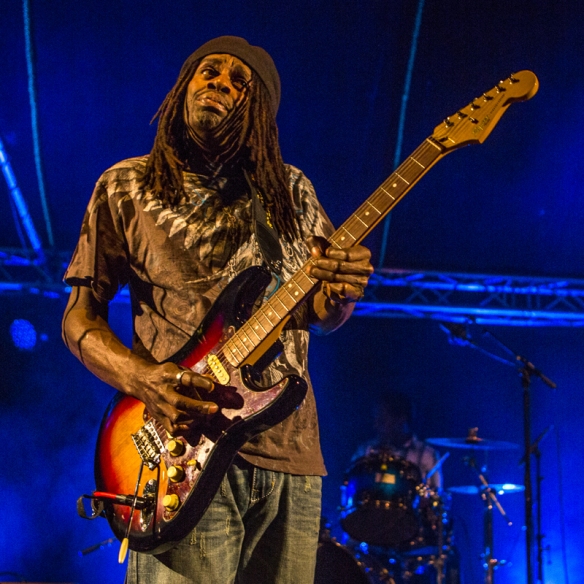 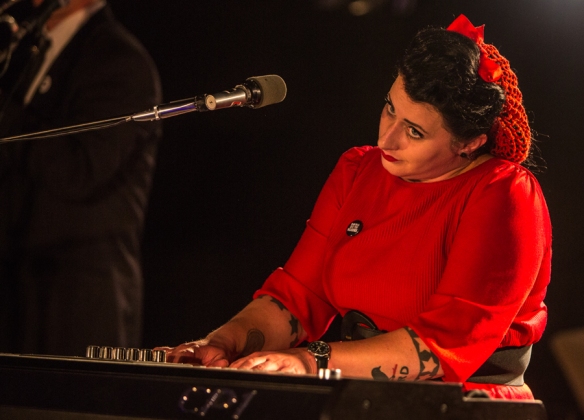 All in all the first night at Blues In Hell was a great experience. A varied program, great artists in different styles, and with the Magic Mirror as an attraction in itself. The tent is a also acoustically good, so everything both sounds and looks good.