Few of us have got the honor of getting our own day. Rosie Flores is one of those few, and August 31st is official Rosie Flores Day in Austin, Texas. From yesterday and all of next week the town is filled up with SXSW attendees, and it is a great tradition to start it all at the Continental Club the night we get in, and last night Rosie Flores was the main attraction there. 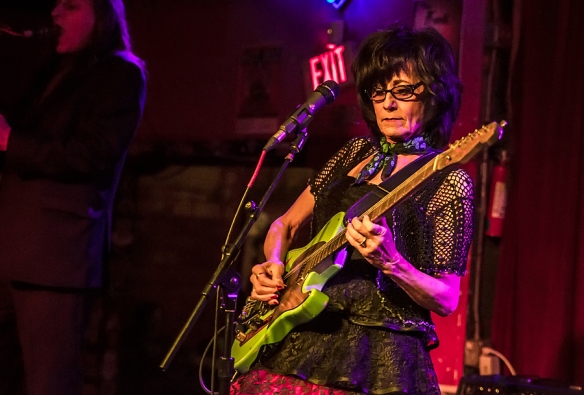 Rosie Flores has played her special blend of music since the late 70’s, but released her first CD in 1987. Since then she has toured with Wanda Jackson, as the lead guitarist of Butch Hancock’s band, one year with Asleep At The Wheel, and she has played solo or with her own band. I have heard her live three-four times, the first time ten years ago. Last night she played with her own band, and the music was quite different from when I heard her earlier.

My impression of Rosie Flores’ music is as a mix between Americana and Tex Mex, much in the same tradition as one of my favorite artists, Tish Hinojosa. If you listen to Rosie Flores’ earlier songs like Midnight To Moonight from her self-titled first CD, you will notice the distinct Tex Mex influences. But yesterday night I got to hear the other side to her music, rockabilly and also surf-like songs.

The Continental Club in Austin is a must see venue. They have live music every day, most often two or three bands every night. Saturdays Redd Volkaert plays a late afternoon set with his band, and other artists like James McMurtry, Toni Price, Dale Watson and Heybale! have regular gigs there. Sunday night when SXSW is over, Alejandro Escovedo always plays a packed show with his band and friends, who can easily be big stars. And often the audience get an extra bonus when Klara, one of the bartenders jumps up on stage for a solo dance.

At the Continental Club we got to hear old and new songs from Rosie Flors and her band, among the the title song from her 2012 album Working Girl’s Guitar. Her band consisted of tenor saxophone, stand up bass, drums and Rosie Flores on her green custom Telecaster-alike guitar plus vocal. She got well deserved applause for her performance, and I can recommend her to everyone who like good Americana with a mix of Tex Mex, rockabilly, a touch of folk, and some stinging guitar work.