I still remember Marianne Faithfull from the 60’s, when she sang As Tears Go By, and was featured in the newspapers from the scandals around The Rolling Stones. After a long silence, I remember when she came back with Broken English in 1979. This years marks er 50 year anniversary for her debut single, As Tears Go By, and she has released her 20th album, Give My LOve To London. She is also on an anniversary tour, and last night she played at Sentrum Scene in Oslo. 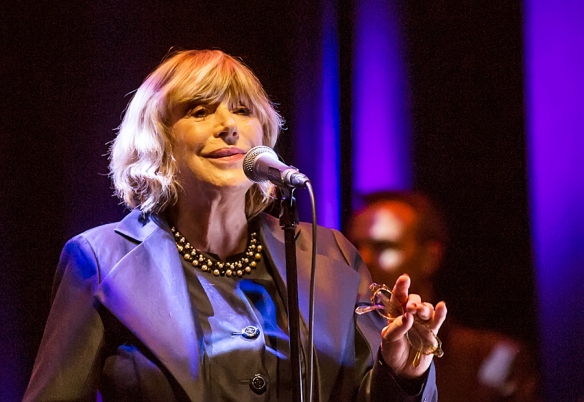 Physically Marianne Faithfull isn’t at her best, and she has to walk with a cane. She also changed between standing and sitting down during the concert. But you don’t go to a Mariann Faithfull concert to get a spectacular stage show, her strength is in her songs and their delivery. Her voice is characteristic, a result of a hard life with drugs, smoking and drinking. But the voice is a big part of what makes her special.

The 60’s saw Marianne Faithfull as part of the entourage around The Rolling Stones, and As Tears Go By was written by Mick Jagger and Keith Richards. The low point was when she was arrested in a drug bust, naked, and only covered by a fur rug. She co-wrote Sister Morphine with Jagger and Richards, and many well known songs are supposedly written about her: You Can’t Always Get What You Want and Wild Horses by The Stones, And Your Bird Can Sing by The Beatles, and also Carrie Ann by The Hollies.

On Give My Love To London she has cooperated with several songwriters. She opened the concert with the title song from the album, which she wrote together with Steve Earle “… one of the only two living socialists in the USA. The other one is John Prine.” The next one was Falling Back which she wrote with Anna Calvi. Broken English was next before Witches Song, also from the Broken English album.

The whole concert was a mix of new and old songs with her short and pointed comments between them. Marianne Faithfull is a performer who knows how to communicate with her audience, and she had full control from the first song. This was the fourth time I saw her live since 2002, where maybe the one in Bergen in 2007 was the best before last night. 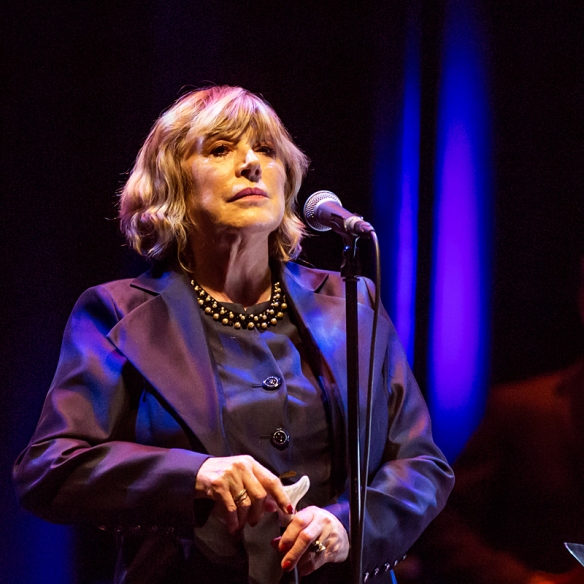 There is something about a performer who has lived harder than most of us, living on the street, heroin addict, attempted suicide, etc.. All of this gives her an authenticity that makes us believe in her songs and her performance. She may be physically frailer now than seven years ago, and her voice may not be the same either, which was notable on Broken English. But the total experience, and also with her band who followed her in a perfect way, giving that extra touch to her songs, without taking over.

Marianne Faithfull turns 68 in December and I hope she comes bak to Oslo again. She is on tour in Europe for the rest of this year, and you can find her tour schedule here. In between you can listen to Give My Love To London, which has got great reviews, and is definitely worth it.

1 thought on “Marianne Faithfull – As Years Go By”