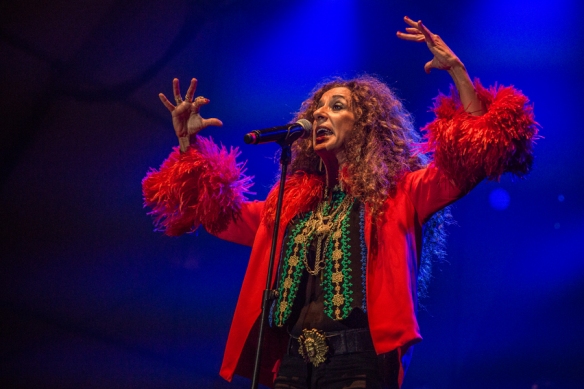 Sometimes I wonder why we know everything about American and English artist in Norway and almost nothing about artists from outside these countries. One thing is tradition, another is the language. I have also been ignorant to the great musical culture in many of these countries. But after having spent more time in Spain I have opened my ears to their music, and last night I saw one of the best representants of modern Spanish song tradition, Rosario Flores.

During the Feria in Nerja in Andalucia in South Spain, there have been midnight concerts in a big tent five nights in a row. I have seen three of them: the DJ Juan Magán, the techno rumba band Camela, and yesterday Rosario Flores. She comes from a famous music and movie family from Madrid, the daughter of famous singer and actress Lola Flores, and the sister of singer songwriter Antonio Flores, and singer and actress Lolita Flores.

Rosario Flores had one of the leading roles in Pedro Almodóvar‘s critically acclaimed movie Hable con ella (Talk to her) from 2002. She has also starred in several TV series besides her career as a singer and songwriter. Her first album, Vuela de Noche, came in 1984, but it was her second album De ley in 1992 that marked her commercial breakthrough. The album sold triple platinum, and the next one, Siento in 1994 sold to double platinum. 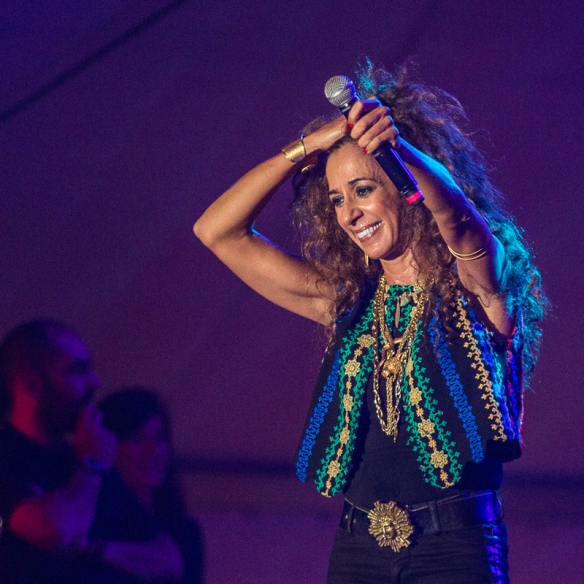 Many of the songs on these two albums were written by her brother Antoni Flores, and her next album, Mucho Por Vivir in 1995 was in many ways a homage to Antonio, who died of an overdose that year. The beautiful ¡Que Bonito! is dedicated to brother Antonio. Since then she has been one of Spain’s best known artists, also outside of the country, with sold out tours in South America and also succesful tour to cities like Miami and New York. Her latest album, Rosario came in 2013 and was produced in Miami by Andrés Saavedra.

It was obvious from before Rosario came on stage last night that the audience really loved her. Literally all ages were present, from young to old, and they were shouting for her, also between songs. Her seven piece band was excellent, never overpowering her, but also with a distinct authority that fit her performance well.

On stage Rosario has full control. She is quite the diva, but never far removed from her fans. She sings to them, with them, and gives the audience her full attention. Her music moves seamless through styles like samba, rhumba, pop, gitano, some funk and some careful touches of flamenco, but always organic and far from the techno sound of the preceding band at the Feria, Camela.

Rosario uses the whole stage when she sings, always attentive to all of her audience. She moves like a cross between a flamenco dancer and a matador. Her voice is really good, and with a variety of aemotions, depending on the song. Since I don’t know her catalogue well enough, I can’t say which songs she sang, but the audience had no problems singing along on almost all of them. 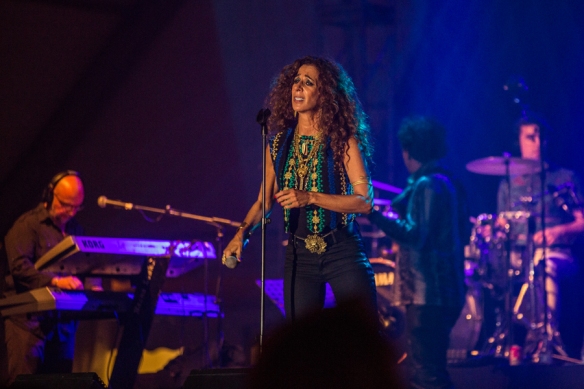 I will recommend all of you who are open to more music than what is played on mainstream radio to tune in to Rosario Flores. A good start is the collection Esencial Rosario from 2013. An even better way to get to know her is to see her on stage. ¡Me gusta mucho!

All photos are © Per Ole Hagen and must  not be used without written permission.