Two years ago I saw Kinky Friedman at Café Mono in Oslo and had a grand evening. Last night he was back, this time at Vulkan arena with a new CD and with some new songs. His quotes are mostly the same as before, but with a few new ones. With Kinky you know what you get, and it is always a joy to see him.

The thing with Kinky Friedman, or The Kinkster, as he likes to call himself, is that he might seem like a comedian with snappy one-liners, but he is a three-dimensional multi artist, a novelist, singer songwriter, politician and buddy with WIllie Nelson. In his book Texas Etiquette, Kinky muses about politics, women, drinking, the strange customs in Texas, and so on. Kinky Friedman’s novels about the private detective aptly named Kinky Friedman are also worth reading.

When it comes to Kinky as a music artist, there is a span between his witty songs and the more serious ones. His latest album, The Loneliest Man I’ve Ever Met is Kinky’s take on the american Songbook with mostly songs by other songwriters, and none of the songs are typical Kinky humor songs. He started the concert Sunday night with one of his older songs, We Reserve the Right to Refuse Your Service, which is a comment on intolerance in the society.

The other side of Kinky Firedman is his old songs from the period with his band, the Texas Jewboys, like Asshole from El Paso and They Ain’t Makin’ Jews Like Jesus Anymore, which he did at the end of the concert. But in general it seems like Kinky Friedman has moved a bit away from these songs towards the more serious lyrics. We got a surprise midway through the concert when he introduced “my favorite Indian, Litte Bear”, or Lillebjørn Nilsen, as he is called in Norway. They did Ride’ Em Jewboys together and with Lillebjørn on harmonica and Joe Cirotti on guitar.

In between his songs Kinky Friedman delivered some of his more famous quotes, like “I have stopped drinking Guinnes and changed to tequila, Mexican mouth wash”. “We were touring Austria by train and passed Mozart’s birthplace, Hitler’s birthplace and Arnold Schwartzenegger’s in half an hour – the evolution of man kind”. “We are going to Germany after Norway, my second most favorite people – with everyone else in first place”. 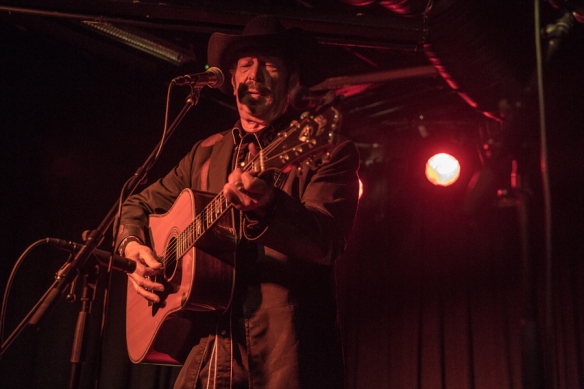 A concert with Kinky Friedman is not a time for beautiful singing and virtuoso guitar playing. Kinky has never been bothered by that, not this time, nor the last time I saw him in 2013. But you get some really good songs, with a mix of serious and funny lyrics, you get som actually deep thoughts on society and politics, and if you are inclined to like a bit of raw humor, you will also get some good laughs.

This article is also posted on Rock At Night.