Friday at Øyafestivalen was a day many had been waiting for, with Pixies and The Shins as two of the bands. The EDM fans were waiting for Cashmere Cat, and there were also many who looked forward to see one of the most promising new country artists, Colter Wall. In between those there were many other bands, and I managed to see a total of seven acts this day. (Photo above: Kaja Gunnufsen doing her crowdsurf.)

One of the many good things about Øyafestivalen is that the first bands don’t have to play for an empty venue. Often it is a thankless task to be the first band on stage, but even if the venue is far from full, there are enough fans to make a crowd. Friday at Øyafestivalen started sunny and the weather was good the whole day. That means a lot of happy people drifting between the stages, listening to the more than twenty different bands and artists this day. 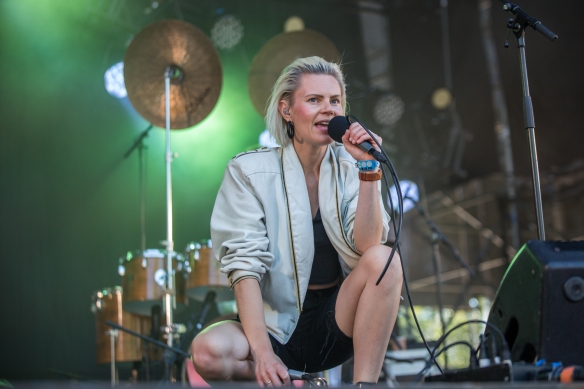 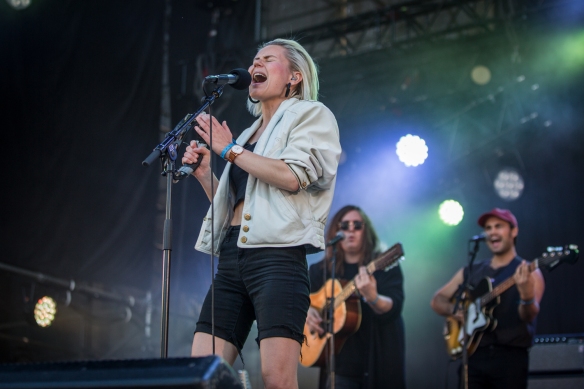 First out at Vindfruen was Billie Van. She has been around for a while, both as a solo act, but also as part of the musical trio Jonas Alaska, Mikhael Paskalev and herself, where the other two backs up the one in front. So also at Øyafestivalen Friday, where Paskalev played guitar, while Alaska played piano. Billie Van hasn’t made it to the top yet, but I think she has found a musical direction that is very promising. She might stretch her voice outside of her comfort zone sometimes, but I was impressed by the songs I heard.

The first act at Amfiet was Kaja Gunnufsen. Her songs have some really good observations, with a lot of dry humor and sometimes quite direct messages, sung with a sweet voice. She has released two albums, and has got good reviews so far. Her band was solid and backed her in a perfect way, while she introduced her songs with the same dry humor as she puts in her lyrics. At the end she proclaimed that she has always wanted to crowdsurf, which she also said she would do. So far the best planned crowdsurfing I have seen!

From Amfiet I went over to the big tent, Sirkus, to see Hilma Nikolaisen. Her music is quite different from the first two artists that day, more experimental and introvert. She has three siblings who all are extremely talented and all of them have marked themselves on the Norwegian music scene. The last time I saw Hilma Nikolaisen, she played bass in the band Serene Maneesh where brother Emil is the singer and guitarist. Solo Hilma Nikolaisen presented songs that were surprisingly catchy and at the same time experimental with long drawn out parts consisting mostly of rhythmic patterns over one chord. I did like it, and Hilma Nikolaisen has great authority on stage.

The Øyafestivalen is known for its quite eclectic mix of music styles and bands, and one of the more surprising bookings on Friday was Colter Wall. He is a country artist from Canada, 22 years old, but with a voice that sounds like he has been singing forever. He performed songs from his latest album, plus covers of songs by among others Townes van Zandt and Ray Wylie Hubbard. On stage Colter Wall has no stage show, except his excellent violinist who had an expressive playing style. What we get is some really good songs – his own and others – played in true country style. 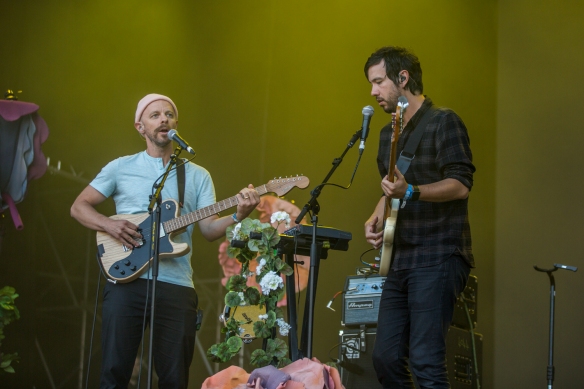 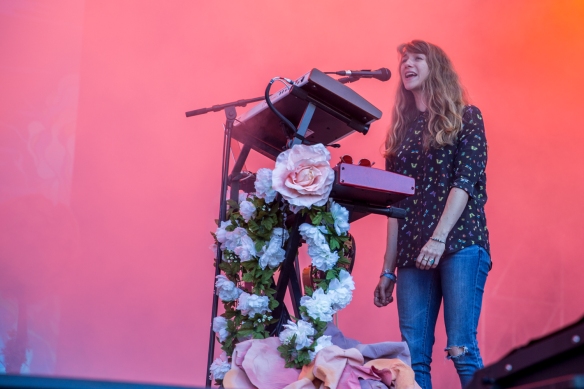 Many fans had come to see The Shins. They are an indie band built around singer and guitarist James Mercer. The band existed as a proper band from 1996 to 2008 when Mercer quit and disbanded the band. After a hiatus he started up again with new members, which is the band who played at Øyafestivalen yesterday. They were new to me, but I liked their sound with a tight and melodious nucleus plus many good details presented by the different musicians. Sometimes the songs reminded. me of the music of the late 60’s, which is not a bad reference for me.

Angel Olsen played at Øyafestivalen in 2014, and I remember her from that concert as a rather introvert, not very communicative artist. But her songs are good, and they were generally well performed yesterday. I have a problem, though, with artists who don’t really try to communicate with the audience, either in there performance or between the songs. Angel Olsen has the musical talent needed to make it, she just need someone to teach her how to perform. 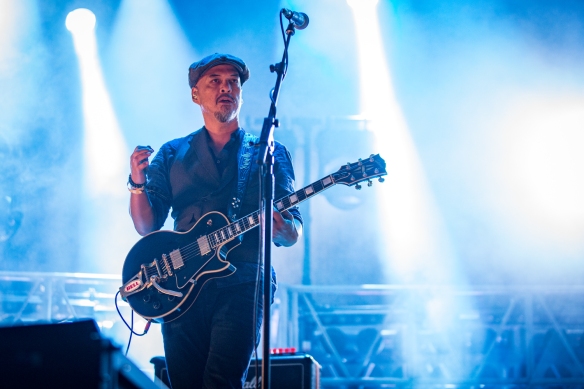 Before the Pixies came on stage, a huge crowd had gathered in front of Amfiet, eager waiting for their heros. The band started 30 years ago, but disbanded already in 1993, then started up again in 2004. Their first incarnation inspired many of the 90’s grunge bands, and they were awarded album of the year by Melody Maker for their debut Surfer Rosa in 1989. In general the Pixies were more popular in the UK and Europe than in the US. At Øyafestivalen they perfumed with the same members as when they started, with Black Francis in front and with their newest member, Paz Lenchantin on bass. The concert was a long mix of new and old songs, and for me who never really followed them, most of them sounded new. But I liked what I heard, and the band played them well.