Every year some famous artist or music personality holds a keynote when the music part of SXSW starts. This year the keynote was held by producer, artist,  film maker and ten times Grammy, plus Oscar winning T Bone Burnett as part of the Convergence day, with seminars ans talks for both Music,  Film and Interactive delegates. Unlike many of the former keynotes I have heard, he didn’t speak about music at all, but it was at the same time on of the best keynotes I have heard during more than twenty years at SXSW. 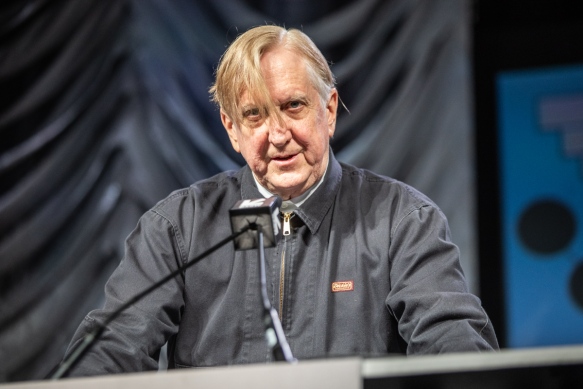 The career of T Bone Walker is too long to mention here, but his work with films like O, Brother, Where Art Thou?, The Big Lebowski, Crazy Heart and several others plus his production for a whole lot of artists, like for instance Robert Plant and Alison Krauss, Elton John Gregg Allman and several others, has made him one of the most sought after producers in the music business.

But T Bone Burnett’s deepest concern in his keynote today isn’t how to get the best sound on a song. He holds a profound belief that society is  going the wrong way  with the monopoly situation the giant Internet platforms Facebook, Google and Amazon have got. He touched several scary examples of how these giants work, and how they consider themselves to be outside of the law.

One important point for Burnett was the Safe Harbor provision that makes Internet platforms not liable for the content that is uploaded to them. The Safe Harbor is a part of the Digital Millenium Copyright Act, that came into US law in 1998. The law was meant to extend copyright protection on the Internet, but at the same time limiting online services’ liability. The back side to this, and also an unintended effect, is that some of the biggest companies in the world operates without liability for what is uploaded on their sites. Burnett’s view is that this must be changed to give back the control  of the copyright  to the creators, not the platforms.

Burnett also  talked about how information is supposed to be free, but also, because information is so valuable, it is exploited by the big companies. And while information about ourselves and privacy should be protected, we are now giving these corporations information they can use for whatever use they might make of it.

It is at the same time depressing, but also enlightening to listen to a man like T Bone Burnett talk about these topics. I do think many of the people in the room wanted to hear about his producing, how he gets that special organic and dynamic sound in all his recordings, etc.. Myself, I was glad that I got to hear his talk, and I just wish that all the Interactive delegates who have mostly left Austin now that their festival is over, had heard it. To me it was a wake up call to the dangers of letting Facebook, Google and Amazon get even more power than they have  already.

T Bone Burnett has posted his talk on his own website, you will find it here.

The photos are © Per Ole Hagen and must not be used without written permission.