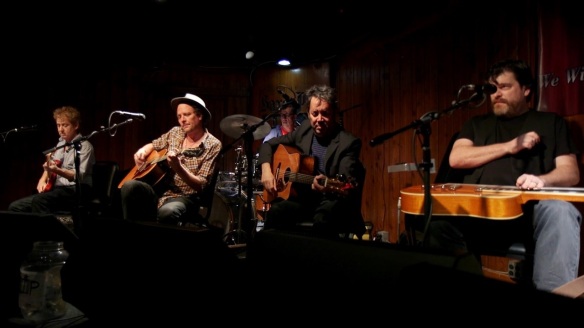 This year I have attended Music and Film at SXSW. And the film I really liked, was Nothing Stays The Same, the film that tells  story  of one of the best music  venues in Austin, the Saxon Pub, and how it has been threatened by the ever growing demand on land to build condos. This threat is definitely a real one, and unfortunately it concerns a lot of the clubs in town. (Photo above: The Resentments at the Saxon Pub)

Jim Sandmann, the DIrector of Nothing Stays The Same

What has made Austin famous for many people, and made a lot of people move here, is the  live music scene. Austin is the one US city which increases its population the most. Many of the new citizens are employers of the different technology companies that is one of the main businesses in Austin. But what attracted people to the city, already in the early 70’s, was the live music scene, centered around some legendary clubs. The Armadillo World Headquarters, Liberty Lounge, Antone’s, The Continental Club, The Broken Spoke were all there at that time.

Nothing Stays The Same Trailer from Jeff Sandmann on Vimeo.

Then the population  grew, there was more pressure on land, and in later years the rent and property taxes have increased, making it difficult for many of the clubs  to survive. The Armadillo and Liberty Lunch disappeared,  Antone’s has had four different locations, and the Broken Spoke, which was located outside of town in the early days, is now surrounded by condos. The Saxon Pub was opened by Joe Ables on South Lamar in 1990, and got early on a good reputation because they paid the bands to play, not only from the door, plus they had the best sound in Austin. But slowly, or actually too fast, the development made the area popular among developers, and a few years ago the owner of the land got an offer  to sell the club to build condos on the land that was hard to refuse.

Nothing Stays the Same is a film about the Saxon Pub and the struggle to survive. The film was started  when everything looked bleak, but luckily it got a happy ending  when investor Gary Keller stepped in and made an offer to pay the same price the owner of the lot was offered. Not to tear it down, but to keep it alive. In the film many of the artists who plays regularly at the Saxon are interviewed, besides Joe Ables who started the club, the mayor of Austin, plus the staff and regulars at the pub.

The history about what made Austin great is also told in the film, and it should be a lesson to learn from for other growing cities all over the world. I see a parallel to the SXSW keynote by David Byrne on Wednesday, where he showed examples of success stories from around the world. One was a study of the effects of  cultural  institutions,  which showed that in boroughs  in Brooklyn  where they had libraries and other cultural institutions, crime went down, the kids got better grades, and many other positive effects. The Saxon story should inspire more studies on the positive effects of what live music venues does to a city.

The film is  directed by Jim Sandmann and produced by Lisa Kay Pfannenstiel, Jeffrey Brown and Jeff Sandmann. If you have the chance, go see it. And it should be compulsory to see it for city planners. Besides telling an important story, luckily with a happy ending, it has a lot of great live music by acts  like Guy  Forsyth, Carolyn Wonderland, Nakia, Miss Lavelle White, The Resentments, Bob Schneider, Patrice Pike and many more.

The photos from the film are promotion photos given to me from the producers.