The last act at the ACL Moody Theatre on the first day of the Music festival at SXSW was Lionel Richie. His voice is still fantastic, and his songs aren’t any worse.

Here are some pictures from the concert. 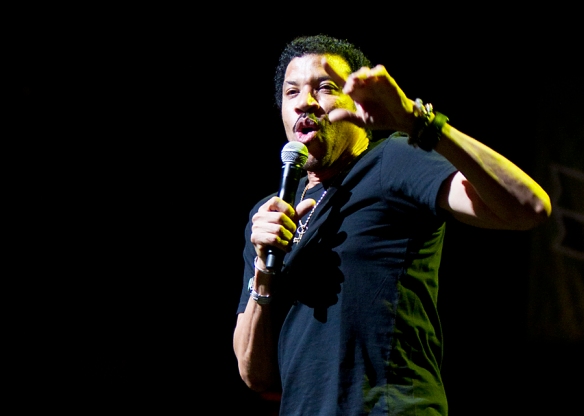 The concert started with a taped intro on Hello, and the audience was singing along even before he entered the stage. From there and out, we got a veritable hit parade. Truly, Running With The Night, Stuck On You, Dancing On The Ceiling, She’s A Brick House, Sail On, were some of the songs he sang.

At one point he pointed out that ”there are more afro americans in the audience than in my band, so I’ll do some Commodores songs for you”. And so he did. He also did a short set of songs, acompanying himself on the piano. The band was great, and he will do a world tour this year, so there should be a chance of seeing him. I would definitely do that if I get the chance.

At the end of his concert, he introduce a man he collaberated with in the 80’s, the country legend Kenny Rogers, and they did Lady together.

All the pictures are © All Rights Reserved: Per Ole Hagen

You can see more pictures from the concert at Artist Pictures.