Dale Watson is one of the artists I like to see every time I am in Austin. He plays a gig at the Continental Club every Monday, and tonight I saw him and his band the Lone Stars there. Dale has been around the block some times in his life, but he has come down on both his feet, and got more true sorrow to sing about than many of his contemporaries. 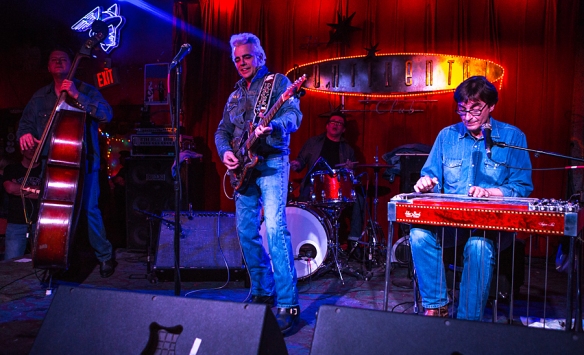 On stage Dale Watson is cool and self-assured, and the Lone Stars are a tight and very competent band that backs him up in the best way possible. His sets are a mix of his best songs from his whole career with a good portion of truck driving songs. At the Continental Club tonight he also did songs from El Rancho Azul CD.

He is a show guy with lots of style. In between songs he does commercials for Lone Star beer, and he and the band also demonstrated how they were training for the Olympics in Syncronized Drinking. Another gag was his demonstration of how to drink a Tequila shot   – Always take your doctor’s shots, and I got this from my doctor.” 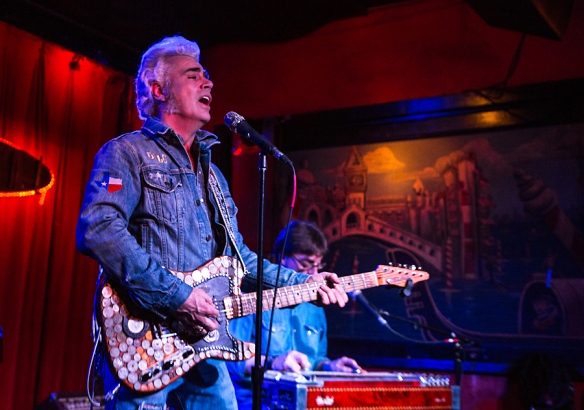 Dale Watson started playing clubs long before he could legally visit them. He grew up outside of Houston and played clubs there with his bigger brother Jim in a band they called Classic Country Bandin. In 1988, 28 years old, he moved to Los Angeles and became a member of the house band at the Palomino Club. In LA he recorded his first single, and in 1992 he moved to Nashville.

He didn’t stay long in Nashville before he moved to Austin, Tx, where he got a recording deal and released his frst CD in 1995, Cheating Heart Attack. He had formed a backing band, The Lone Stars, which is still with him. The CD won great acclaim, and was celebrated for his old style apporach to the music. All his recordings have been in the same broad style, which hasn’t made him rich from the sales, but it has given him a position as an artist who never compromises on his musical beliefs.

In September 2000 his fiancée Terri was killed in a car accident, and Dale Watson drowned his sorrows in alcohol and drugs. He eventually recovered and made one of his finest CDs, Every Song I Write Is For You in memory of his girlfriend. The CD should have got more attention, and it has become one of my favourite country albums.

His latest CD is El Rancho Azul whih he has released in January this year with His Lone Stars. You can hear it on Spotify together with most of his other recordings. I highly recommend both his CDs and seeing Dale Watson live. You might have to go to Austin, but you could do worse.