Unni Wilhelmsen  is one of my favorite Norwegian artists. She released her first CD, To Whom It May Concern, in 1996. The CD sold to gold and won two Norwegian Grammies for Unni, Album of the year and Female artist of the year. Now she hs released her eight CD, with the long title Unni WIlhelmsen – Live With Bodoe Rhythm Group Featuring Bodoe Sinfonietta.

When Unni WIlhelmsen released To Whom It May Concern, she got an instant hit with Won’t Go Near You Again. The song is also on the live CD, in a arrangement by Henning Gravrok for Bodoe Sinfonietta and Bodoe Rhythm Group. It is always a risk to, so to speak, compete with yourself, but I end up liking both versions just as well. Both the intimate original, but also the new version, sung by a much more mature and self-assured artist. That is one of the strongest points of this CD, that we get to hear Unni Wilhelmsen the live artist, in a production that really shows her from her best side.

The songs are a mix of some of her best songs and five cover song, where the most daring is Both Sides Now by Joni Mitchell. I have heard her do it solo with her guitar, but it sounds great with the full orchestra on the CD. The same goes for Arthur Hamilton’s Cry Me A RIver and This Must Be The Place by David Byrne and the Talking Heads. Northern Lands by Jan Gunnar Hoff is a precious song in a northern mood. The last cover is Johnny Mercer and Michel Legrand’s timeless Once Upon A Summerime. To me these songs show that Unni WIlhelmsen can do more than sing her own songs, and her voice matches the songs very well.

Besides Won’t Go Near You Again, she also does her other big hit from the early period, Anything ’bout June. This song has got a trio treatment, bass, piano, soft drums, and that compliments the songs well. Two of the most touching songs on the CD are Natta sola (goodnight Sun) and Fingerboel (Thimble). The lyrics to these two is written by Terje Borg, who Unni Wilhelmsen lived with for ten years until last summer. He died suddenly three weeks before the CD was released, and these two songs works as a musical testament to a great guy and an equally great lyricist.

The performances on this CD was not originally meant to become a CD. Originally this was a concert some years ago that luckily was recorded. After listening to the tape, she decided to release it. The sound is crisp and crystal clear, the arrangements by Gravrok, Jan Gunnar Hoff, Dag Erik Pedersen and Finn Robert Olsen are great, both the orchestra and the trio plays with a freshness that is excellent, and Unni’s vocal performance is among the best you can find in Norway today. I will personally recommend Unni Wilhelmsen – Live WIth Bodoe Rhythm Group Featuring Bodoe Sinfonietta to everyone who likes quality music. 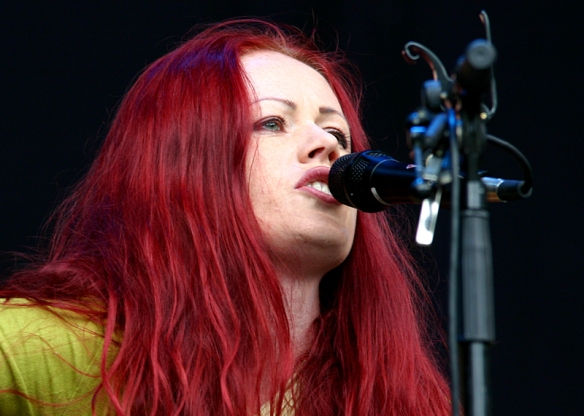 (I have to add that I know Unni Wilhelmsen personally. That doesn’t change my opinion about this CD.)

The pictures are from the period 1999 to 2007. They are all © Per Ole Hagen and must not be used without written permission.