Lucinda WIlliams is one of the best songwriters in the Americana – country landscape for the last 20 years. She has won three Grammys  and has been nominated for 12 more. Her commercial break through came as late as 1998 with Car Wheels On A Gravel Road. From that CD she has been up there as one of the leading female artists in the the landscape between country, rock and Americana. 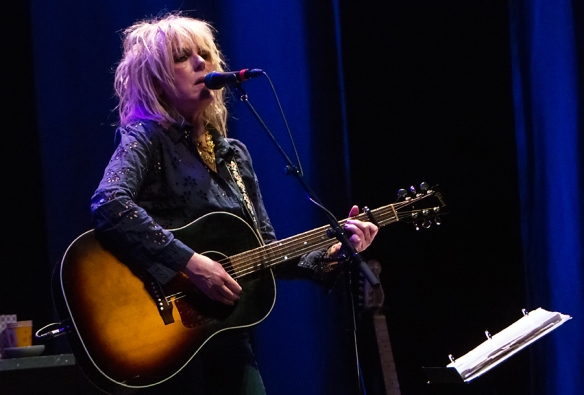 Last night Lucinda Williams played a half-full Rockefeller Music Hall in Oslo with her trio, Doug Pettibone on guitar and Dave Sutton on bass. I have seen her many times since my first time in 2001, and I have always been impressed by her songs and her performance. Mostly I have  seen her with a band, so this intimate setting was new for me. The trio setting without drums and fill instruments was definitely first of all for her hard core fans, since the songs had to stand by themselves, naked, and without help from a full arrangement.

One of the reasons for the low attendance might have been the ticket price, which was very high.Then Norway celebrated their independence day the day before, and this weekend is also a national holiday weekend. On top of that summer at last showed its face in Norway, making many Norwegians go away or the weekend.

The concert started with one of Lucinda Williams’ more rocky songs, Randy Weeks’ Can’t Let Go. The next one was Crescent City, the song about New Orleans that Emmylou Harris has done a cover on at Cowgirl’s Prayer. Well Well Well followed, and then a charming version of Jailhouse Tears, with guitarist Pettibone as the bad guy.

Lucinda WIlliams at the ACL festival in Austin 2005

The rest of the concert had songs from her different CDs, and after an hour, she changed from acoustic to electric guitar. They did Come On from her great CD West, and it was good to hear a more rocky song again. I really like Lucinda WIlliams’ songs, but in the trio setting some of the songs appear a bit monotonous. Even if the concert picked up speed after an hour, it isn’t quite enough for me. But she did her more well known songs at the end of the concert, like Essence, Joy, Honey Bee and Sweet Old World.

I remember the second time I saw Lucinda Wiliams, at the Austin Music Hall during SXSW in 2003. She played before Willie Nelson, and refused to go off stage, so the guards had to almost carry her off. My best concert with her was at the Austin City Limits festival in 2005. There she played with a great bad, she was inspired, and it sounded great. At the Rockefeller Music Hall yesterday, the sound was ok, and both the musicians were doing a great job. But most of her songs aren’t very dynamic, so for the ls hard core fans, it would have helped with a fuller band. 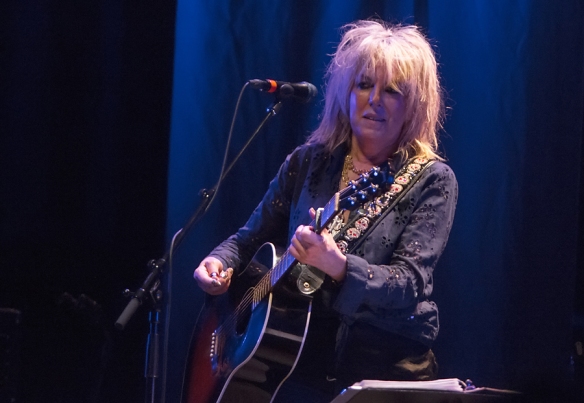 But, who’s complaining? If you know her as an artist, you pretty much know what you get, and she is a great storyteller. All in all the concert was good good as it was. I must admit though, I have seen her better at other performances, and then with a band. I can understand her decision to travel with a smaller outfit, but to me it could have been even more intimate with her alone, or it could have rocked harder with a full band. But I will definitely see her again at the next opportunity. And as a positive afterthought, she seemed to be in a good mood last night, something you can’t take for granted with Lucinda Williams.

Lucinda Williams at the ACL festival in Austin 2005