Aage Aleksandersen started out in the band Prudence in the late 60’s, and has been going on since then. The Prudence disbanded in 1975, after a period as one of the best Norwegian rock band – more like The Band than anything else. After this period, he started the band Sambandet as his backing band, went solo and started singing in Norwegian. Six years later his song Lys og varme (Light and Warmth) became an alternative national anthem, and Aage got the same status in Norway that Bruce Springsteen has in the US.

There are other similarities between those two artists, among them that Aage has had the same band, Sambandet, for more than 35 years, except for the period 1987-2005 when he had different backing bands. There have been some changes since the first period, but generally, it is the same band as when he made the LP, Levva Livet in 1984. That album sold 275.000 copies, so far a new record for Norway. All together Aage Aleksandersen has released some 25 albums solo, with or without Sambandet.

Since Sambandet started up again in 2005, Aage Aleksandersen and the band have toured extensively. The band is extremely tight, the musicianship is of a very high quality, and they know each other well. It is always a good sign when you can see that the band is enjoying themselves on stage.

Aage Aleksandersen and Sambandet played at the Steinkjer Festival last night for 5000 people. It is so far the best concert I have seen with the band, and since his songs are so well known, he had a five thousand member choir joining him in the songs. From the first song, Min dag (It’s my day), the audience joined in, and especially so on Lys og varme.

I specially like the last part of the concert, where the band Violet Road joined Sambandet on stage, and they did some of the old Prudence classics together. Violet Road is a band from a small place in the north of Norway, and they are what I would call a complete band with great vocals and also a dynamic and playful attitude to their performance. 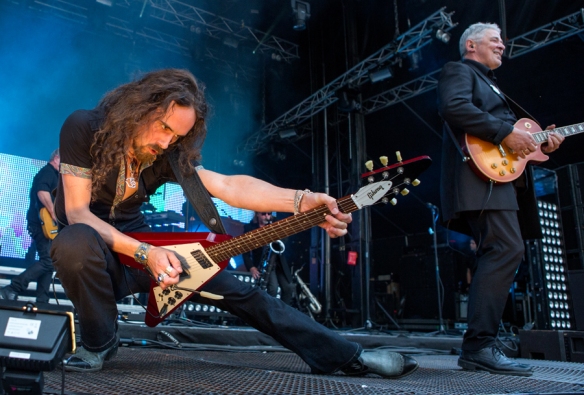 Aage Aleksandersen has always been a great live artist. But first of all as a performer of good songs with a great band. He doesn’t do much more than sing and play the songs himself, but to me that is enough. I don’t need the extra flash that many artists put on their show. Sambandet have Skjalg Raaen, and he does all the guitar hero tricks that makes the show extra interesting visually.

There is always a danger with artists like Aage Aleksandersen and bands like Sambandet that on a bad day they still sound very good. With such a long career, just going through the motions is usually better than many newer bands can deliver on a good day. Yesterday was definitely a good day for Aage and the band, and it became both a rock concert and a happening. With an audience who definitely loves the people on stage, they join together in a unity that is quite noticeable.

Aage Aleksandersen og Sambandet are on a tour that started in June and ends in October. Next weekend they play the Skagen Festival in Denmark, and in September they play two sold out houses at Rockefeller Music Hall in Oslo. In between they are visiting many festivals and venues around Norway. You can check out the tour list here. If you have the chance, they are definitely worth seeing. 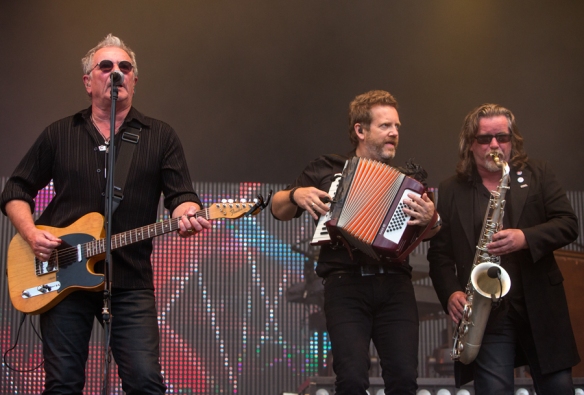 1 thought on “Aage Aleksandersen – The Grandfather Of Norwegian Rock”