The second day of the Slottsfjell Festival offered another mix of new and established artists, pop, hip hop, rock, black metal, singer songwriter, you name it. The weather was just as nice as the first day, and the kids didn’t seem to be too hungover from the night before. (Picture above: Shining)

My first act on Friday was Razika, the all girl band from Bergen. They played the big stage, and had no problem filling it in front of a few thousand fans. That is the good thing about Razika, they have got some dedicated fans, and it is obvious that their charming pop songs with influences from reggae, ska and 80’s new wave is a winner.

After Razika I saw Imagine Dragons on the same stage. They played Bergen Fest a month ago, and it was ok to see them again. I was not as impressed with their performance as I was when I saw them in Bergen. Maybe because their music isn’t my first choice. But that doesn’t matter as long as the audience like them. 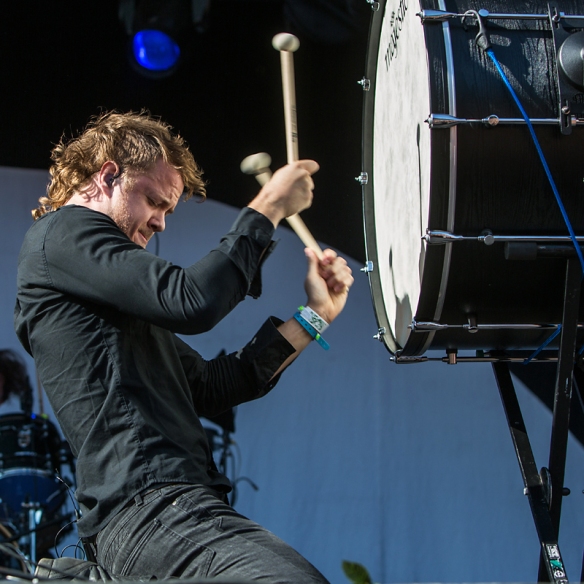 As I wrote in the report from the first day at the Slottsfjell Festival, the audience here are younger than what I see at other festivals, and the band’s singer, Dan Reynolds, are extremely popular among the younger girls. They had found their rails by the rail in front of the stage, and everytime Reynolds looked down, they screamed. So Imagine Dragons are a smart booking to attract a younger female audience for a festival.

After Imagine Dragons I climbed up the 127 step staircase to the Kastellet stage to see Shining, the Norwegian black jazz band. They are always fun to watch, and their musicianship is on a very high level. This combined with the charismatic fron man Munkeby makes their performances worth seeing.

Shining’s music is quite complicated, with meter changes, high tempos, lots of difficult passages and a strong energy. To me, this was one of the better concerts I have seen with Shining, on the same level as the one at Byscenen in Trondheim two months ago.

Kendrick Lamar was the the next artist on the big stage, and after a short delay because of some technical problems with a synthesizer, he came on stage to an enormous applause. Lamar is one of the headliners at the festival, and his latest CD, “good kid, m.A.A.d.city” has sold almost a million copies so far. Lamar is also playing the Oya Festival in Oslo in August, so there will be a new chance to see him there.

The next band on my agenda was Immortal, so it was back to the staircase again. Up by the stage I was informed that there was no pit photography for the concert, so I had to shoot from a distance. Whatever, the band’s act is solid black metal, and they have been around since 1990.

All the times I have seen Immortal, it has been in a dark club or venue with lots of stage smoke and creative backlight. At the Kastellet stage, the late evening sun was shining on the stage, and together with their smoke, stage light and pyro, it actually made the performance worth while seeing, since Immortal is always worth hearing. You can read a review of the concert (in Norwegian) at NRK P3’s website.

After Immortal, Biffy Clyro was the  headliner on the big stage. Due to photo restrictions, I didn’t see the concert, but I saw them in Bergen a month ago, and here is my report from that concert.

Mr. Orkester with help on washboard.

On the way down from the Kastellet stage (a different staircase with 130 steps), I stopped at one of the smaller stages. And here we talk about really small! The artist playing was a Norwegian one man band, appropriately called Mr. Orkester. I have never seen him before, know nothing about him, but he had a charming approach to his performance, and the people who saw him had a great time.

The audience to Kendrick Lamar

As for the first night, I managed to stay away from the late night parties and club concerts. Of course I should have checked it out, but a whole day at the festival in full sunshine and hot weather is quite demanding. The point is to avoid being dehydrated, and I lost count of how many bottles of water I drank. To us work in the press, we have our own area with a bar, so we have no problems getting what we need. The lines for beer and water were still ridiculously long on this second day, and that is a potential problem for the festival. I suspect that many also give up on the water, and rather buy more beer when they first get to the counter. With such a young audience, there are many who aren’t used to drinking all day long. All in all I don’t think the Slottsfjell Festival have a bigger drinking problem than other festivals, but easier access to all kind of drinks woiuld certainly be a smart move.

All in all my impression of a well organized festival was confirmed today, and Saturday is the last day of the Slottsfjell Festival. More later.