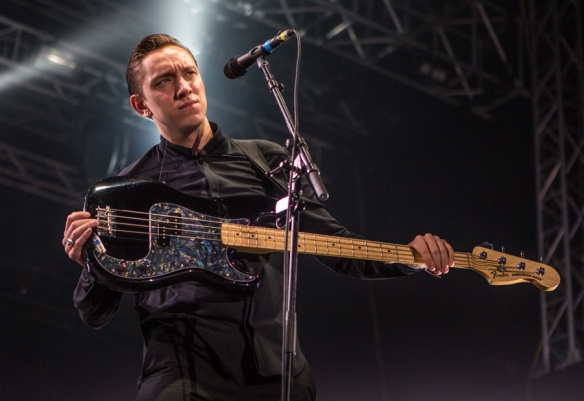 The Pstereo festival in Trondheim has established itself as one of the most interesting festivals in Norway with a booking that only Oya surpasses. For a two day festival with three stages plus a talent stage, they have an unusually eclectic variety in their booking. The other good thing is that the fans like it, this year, for the first year, Friday night was sold out. (Picture above: Oliver Sim from The xx) 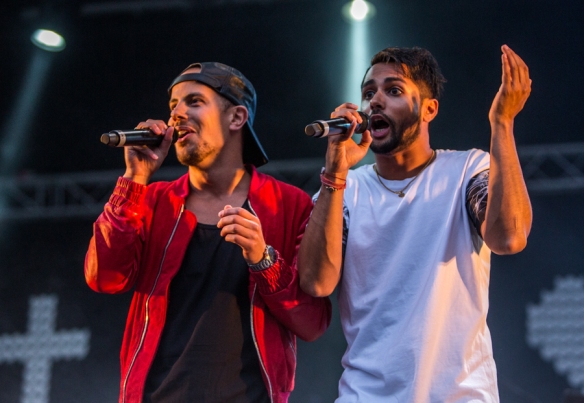 About 7.500 people were present when The xx closed the first day of the Pstereo 2013. Before that, we had got a lot of interesting artists, many whom I have never seen before, combined with some safe bookings like Karpe Diem. Here are the concerts I saw on Friday. 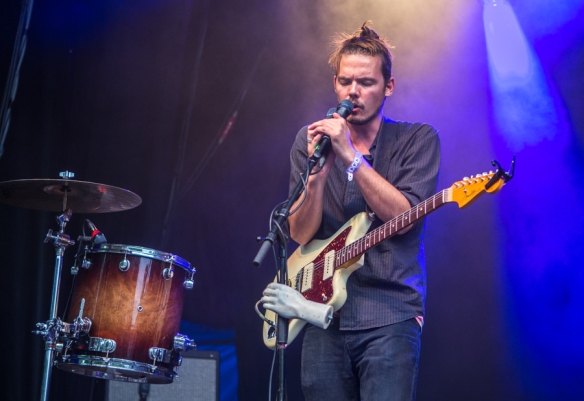 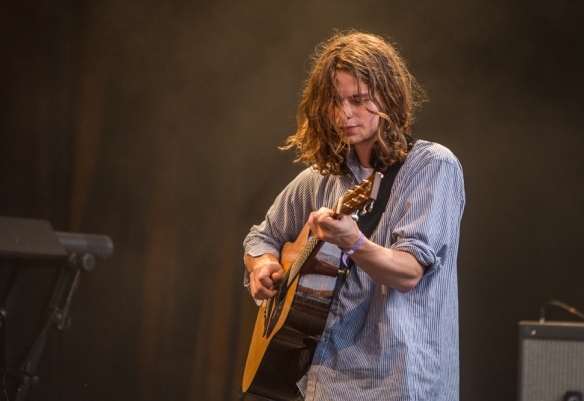 My first two concerts were a close race between Half Moon Run and Emilie Nicolas. With 5 minutes between their start, it was difficult to see both. But I started with Canadian Half Moon Run, a band that surprised everyone in the audience in a positive way with their exquisite music and performance. They have been in Norway before, as a support band for Mumford & Son, but they can perfectly well stand on their own. NRK P3 gave the concert a 6 out of 6. I saw the start and the end of the concert, and I hope they come back so I can see the whole concert. 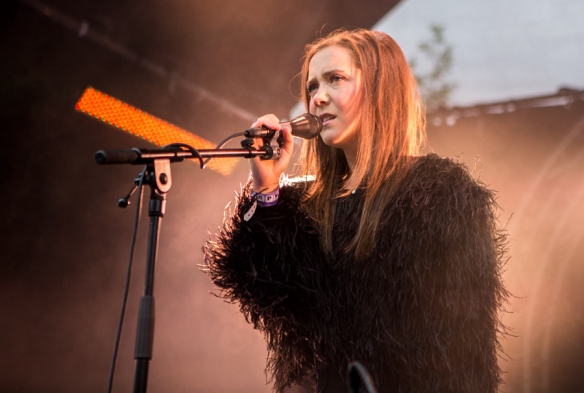 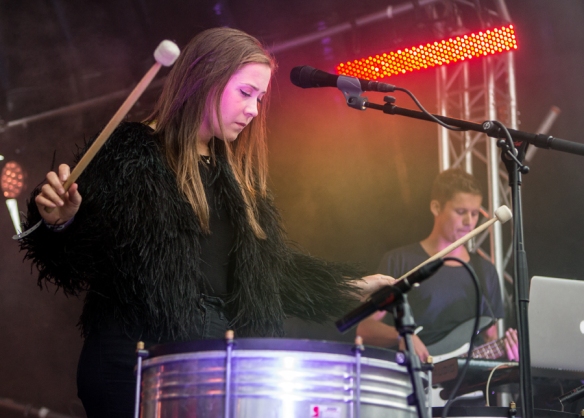 From Half Moon Run, I ran over to see Emilie Nicolas. She is a young debutant, and a very promising artist. Emilie writes her own songs with a modern pop sound. Her voice is clear, personal, and with a wide tonal range. Emilie Nicolas is one of many artists in Norway who have studied at the Jazz department at the Music Conservatory in Trondheim. It shows in her way of using her voice. NRK P3 gave the concert a 5 out of 6 in their review. 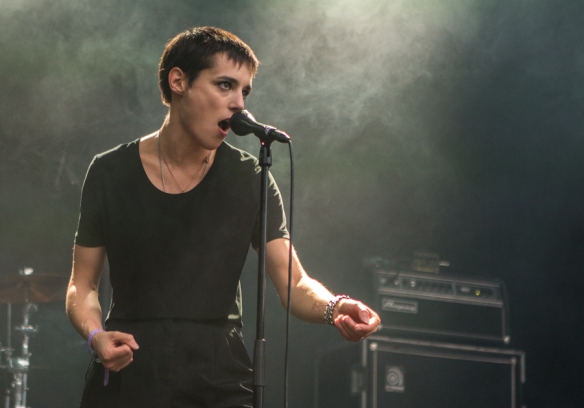 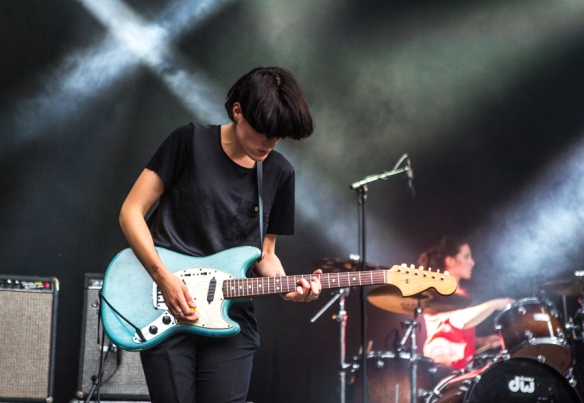 After Emilie Nicolas I went back to see the end of Half Moon Run’s concert. Then after a while, another collision – Savages vs. Phil T Rich. I started with Savages, an all female band from London. Straight forward post-punk played with great energy and with poignant and effective songs. They played the Roskilde festival this summer, and for many of the audience, they were one of the highlights of the first day. 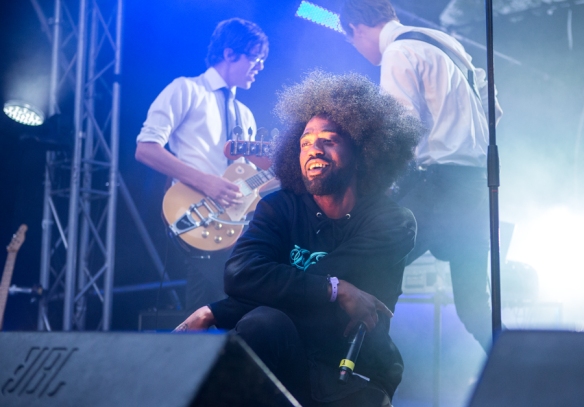 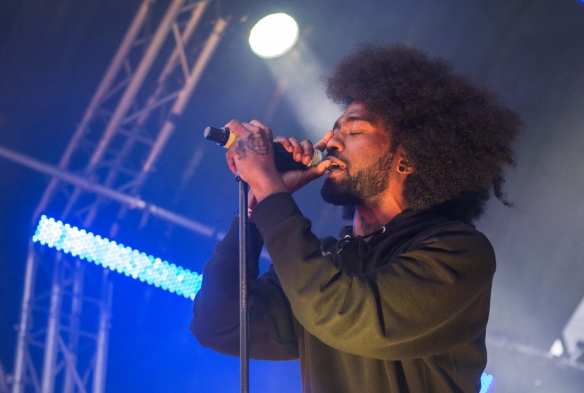 Phil T Rich is a Norwegian rapper who came up through NRK’s Urort, winning the price This Year’s Urort artist in January. His songs are more melodic than many contemporary hip hopers, which I personally like. With his wild hair and energetic performance, Phil T Rich is a good entertainer and the fans like him. 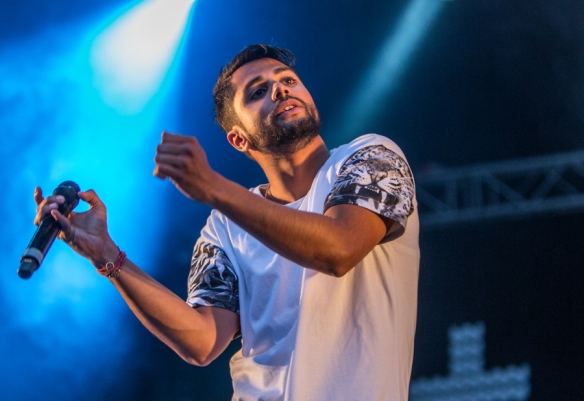 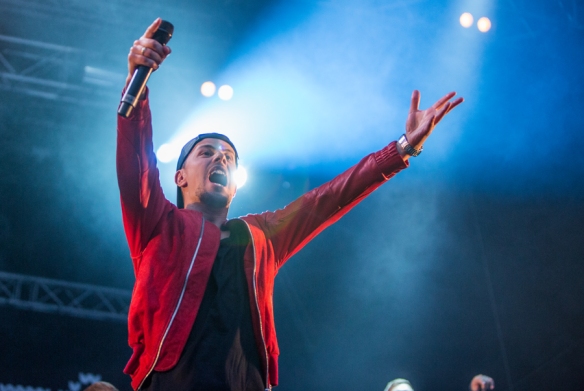 Karpe Diem have played many festivals this summer. So far I have seen them at three of them. They are a really good live band, I personally like both their music and their performance, even if I am not a big hip hop fan. It might have something to do with their songs – they rap and sing in Norwegian , they have strong melodies and reflective lyrics. Magdi and Chirag are also two good guys, they don’t try to pretend to be gangsters, and they send good vibrations from the stage. And they have a band! That makes the whole difference to me. As a concert, this one at Pstereo was typical high-class Karpe Diem as I have come to expect of the band. 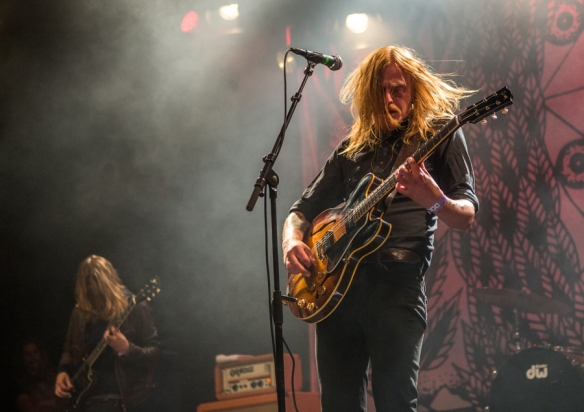 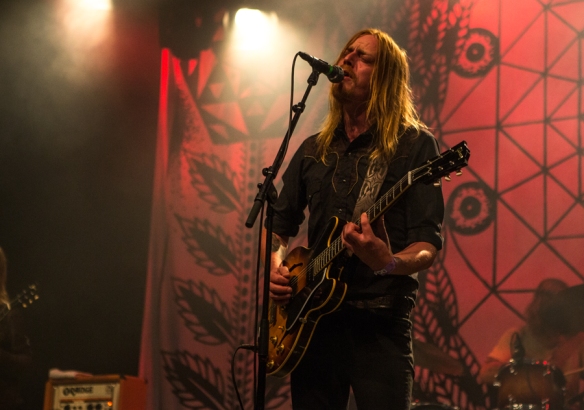 Graveyard is a Swedish straight rock band – two guitars, bass, drums – and they play straight forward rock music. Nothing wrong here, on the contrary. We need more bands like Graveyard, who continue the heritage from the late 60’s and the 70’s rock bands. Again there was a collision between this concert and Kate Boy, whom I had to photograph, so I didn’t see much of Graveyard. But what I saw confirmed my belief in the band. 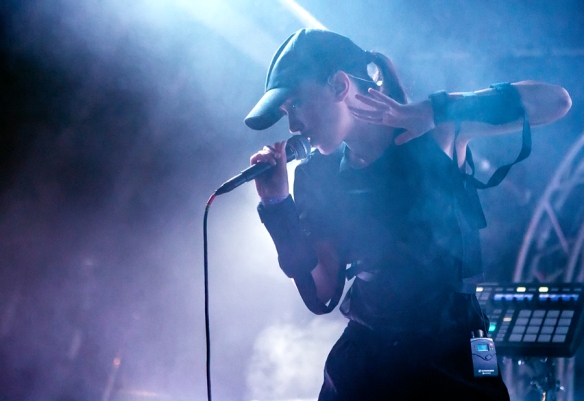 Kate Boy was a new band to me, and not necessarily a new favorite. The band is Australian Kate Athurst and three Swedish musicians. Lot of synths, a sound I have heard before, but some cathy songs, like their best one, Northern Light. NRK P3 gave the concert a 3 out of 6. 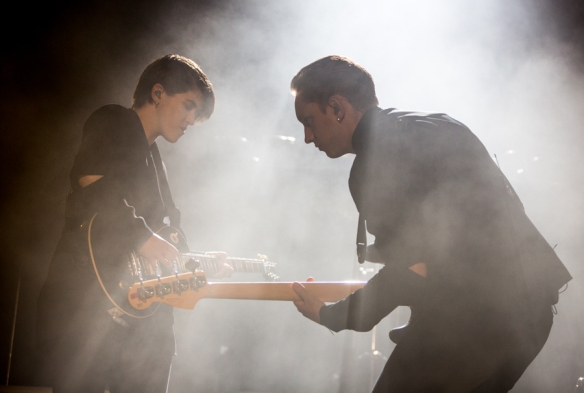 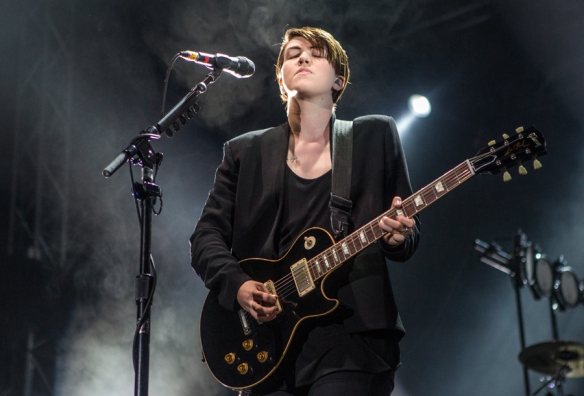 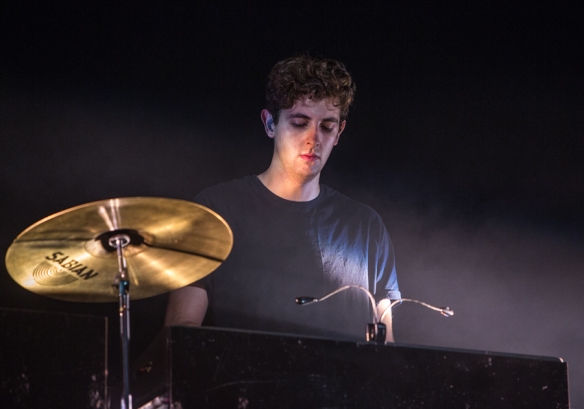 The xx is also new to me live. Their reflective, laid-back, slow flowing music was perfect as a contrast to all the other and harder music at the festival. The trio had a clean setup on stage, with Oliver Sim on vocals and bass and characteristically flowing movements while playing, and Romy Madley Croft on guitar and vocals. The third member is keyboard and remix genius Jamie xx. Great songs, almost meditative, and a perfect way to end the day. 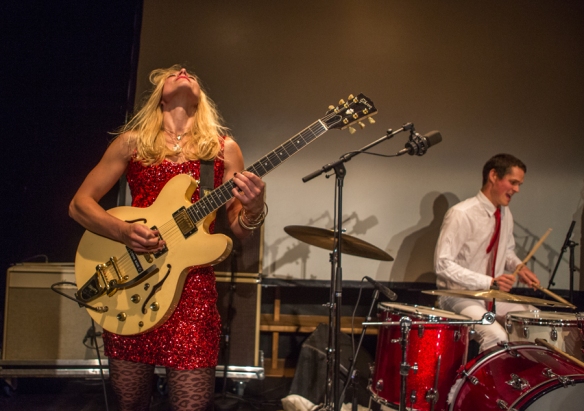 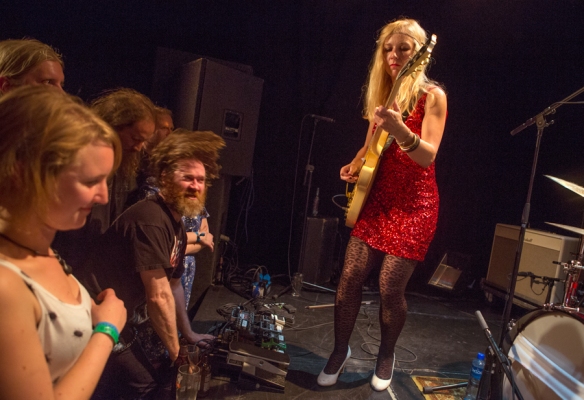 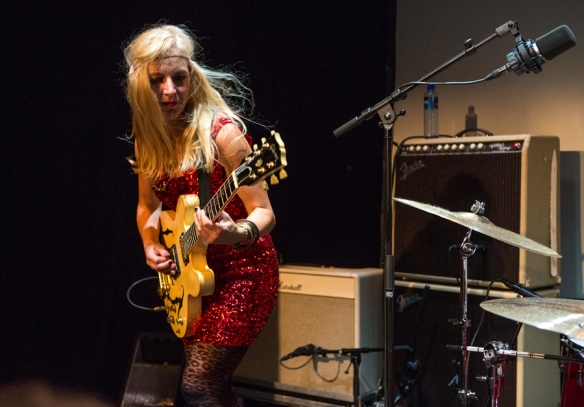 But the night had just started when the festival closed down at midnight. The clubs in Trondheim were open with some very good bands. I had a choice between Shining and Hedvig Mollestad, and chose the latter, since I saw Shining at Oya a week ago. She played a small club with her fantastic trio, and we got to stand close to the stage. Her playing is something else, and it isn’t often I see a whole concert with only instrumental music in a mix between heavy rock and jazz with asymmetric times. The two other members of the trio, Ellen Brekken on stand up and electric bass, and Ivar Loe Bjornstad are also excellent musicians, following Hedvig and making everything seemed effortless, while we know few can manage to play their music. While The xx were perfect to end the festival day, Hedvig Mollestad Trio was the perfect way to end the night.

2 thoughts on “Friday Night In Pstereo”