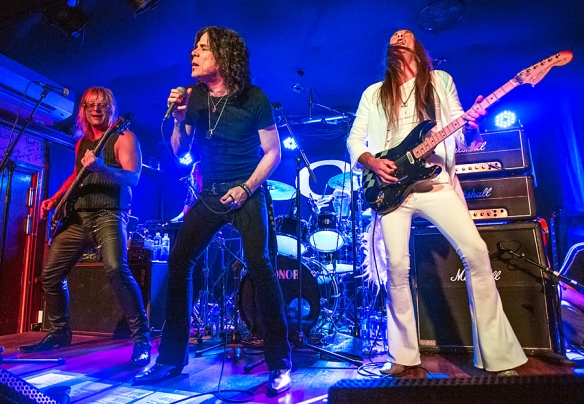 The word intimate and TNT in the same sentence might be considered a contradiction in terms. Last night TNT held a full concert for 100-150 people in a small restaurant/club at the outskirts of Oslo. The setting was both grand and intimate, and the lucky ones got a one hour concert with one of the big rock bands from the 80’s. 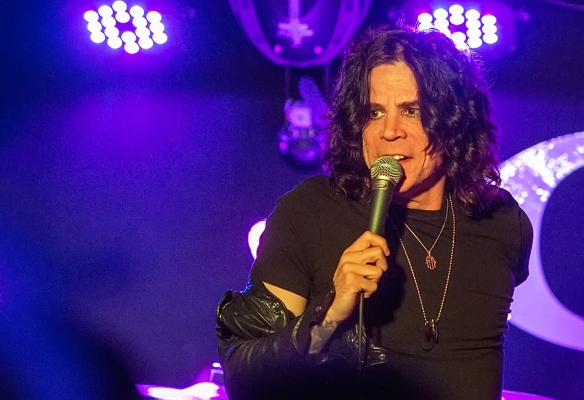 TNT started out in 1982 and have played together with some line-up changes constantly since the, except for a hiatus from 1993-1996. The only constant facto has been guitarist Ronnie Le Tekroe. But drummer Morten Diesel Dahl has also been with the band a long time – except for the period 1988 to 2001. Singer Tony Harnell joined the band in 1984 and stayed until 2006 when Tony Mills took over. Harnell has been back again since 2013. Bassist Victor Borge joined in 2006, while keyboardist Roger Gilton joined in 2011. 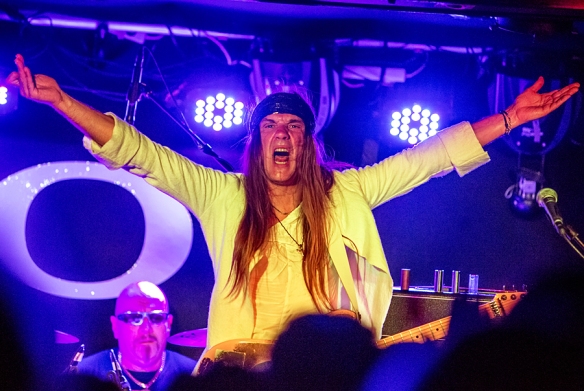 To me, TNT is first of all Tony Harnell’s voice and Ronnie Le Tekroe’s guitar. Harrell has got that voice that without effort goes higher than most of us can manage, and he still sounds amazingly well. Most of us get more gruffy in our voice during the years, but this doesn’t seem to have afflicted Harnell. Mr. Le Tekroe has been one of Norway’s leading guitarists for 30 years, and is still the same wizard on guitar. With a tight and hard rhythm section from Dahl and Borge, and Gilton’s tasteful keyboard, there were never any signs of the band leaning back because of the setting. 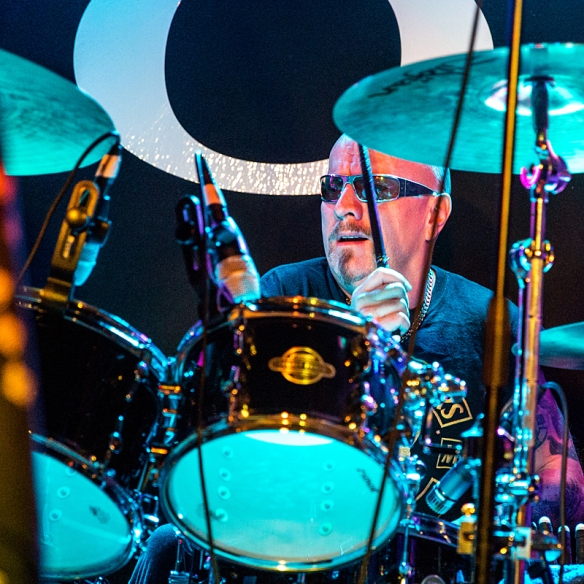 The band played 14 songs, and we got a good mix of new and old, with their biggest hits in between. Some of us will see them at festivals this summer, and the setlist looked like a good festival show. As a rehearsal for the bigger stages, the concert at Olsen at Bryn worked really well. The venue is a restaurant with a stage, and they have live music every Friday and Saturday. Many local acts, but also big acts. Luckily I live quite close to the place, and more credit to them for supporting live music. 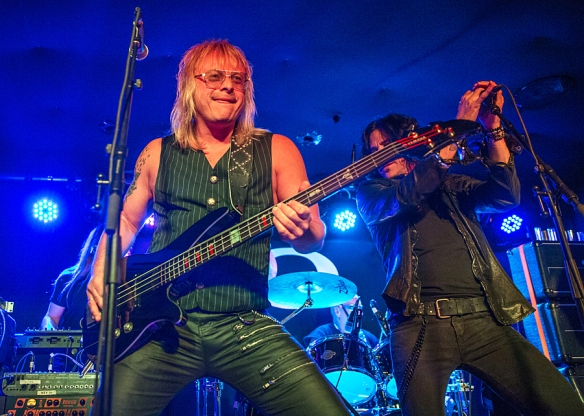 So, what about the show last night? The audience needed some warming up, in the beginning of the set. But after some songs, and specially when the played My Religion, the audience were with the band. (The setlist is at the end of this post). From there and out, they had the audience where they wanted them. We also got a solo song from Ronnie Le Tekroe where he showed us why he is the uncrowned king of heavy metal licks in Norway. 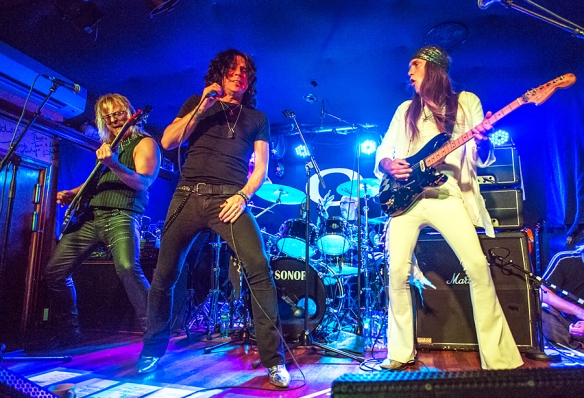 According to AllMusic, the reason for the temporary split in 1993 was friction between the Norwegian and the American fraction of the band. The Norwegians were satisfied with their domestic success, while the Americans wanted to pursue the international markets. Luckily they decided to start up again some years later, and have kept it up since then. This winter TNT recorded a 30 minutes TV concert at NRK1 (may be geoblocked to Norway), which showed a vital and confident band. They also did a concert with the Trondheim Symphonic Orchestra in the summer of 2012 to celebrate 30 years as a band, and you can see this, too, at NRK’s website(may also be geoblocked). 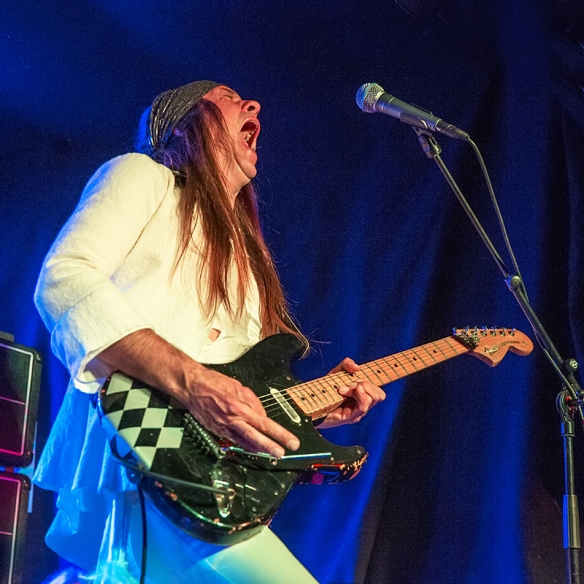 After Olsen at Bryn, the band is playing in Japan and in some European countries, before the festival season starts in June. Here in Norway we will be able to see them at the Tons of Rock festival in Halden June 19-21, and the same weekend they play at the Selbu Sommer festival. The first weekend in June they are playing at Sweden Rock, and then in Stavanger. Later this summer they are playing the Rock of Ages festival in Germany and Rauma Rock in Norway. You’ll find the tour list on their website. 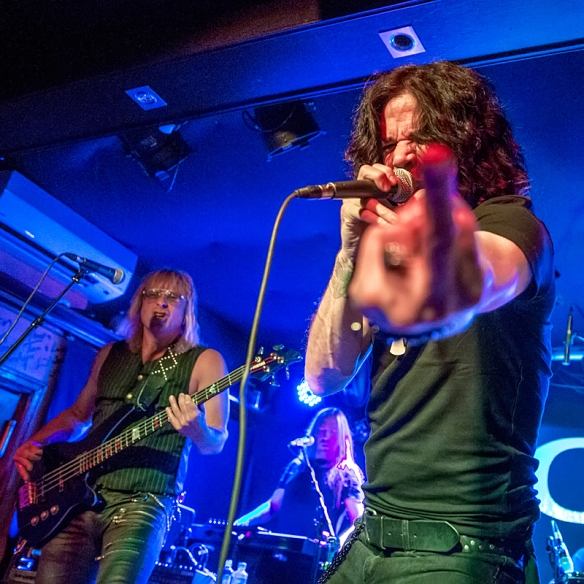 I had a great time at Olsen last night, and I am already looking forward to the Tons of Rock festival in Halden in June. They closed their concert with Seven Seas before two extras, the last unsurprisingly their biggest hit 10.000 Lovers. The song was released on Tell No Tales from 1987, and is still as vital as 27 years ago. The good news is that TNT play it with the necessary power and it works as an exclamation mark to a great concert with the band. 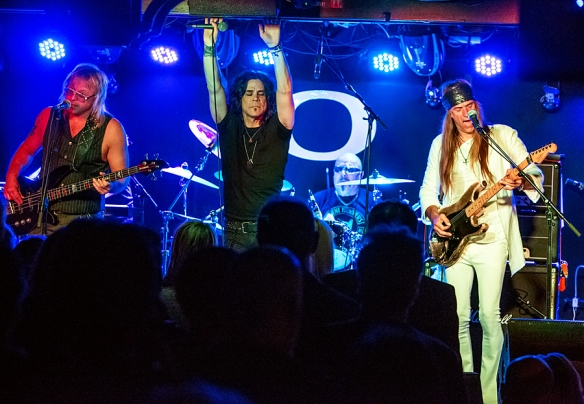 TNT played these songs: Invisible Noise, Give Me A Sign, She Needs Me, Downhill Racer, My Religion, Caught Between The Tigers, Ronnie Le Tekroes solo number, Tonight I’m Falling, End Of The Line, Intuition, As Far As The Eye Can See, Seven Seas, and the two extras Northern Lights and 10.000 Lovers. 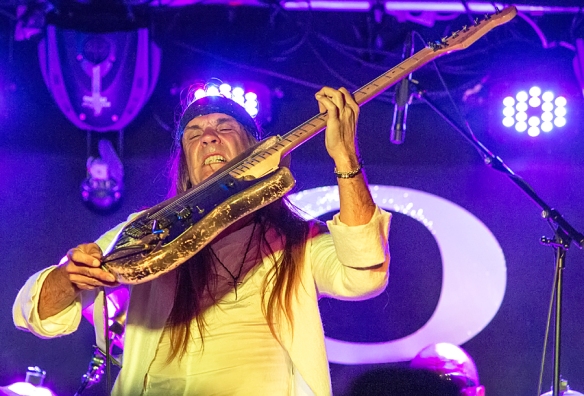 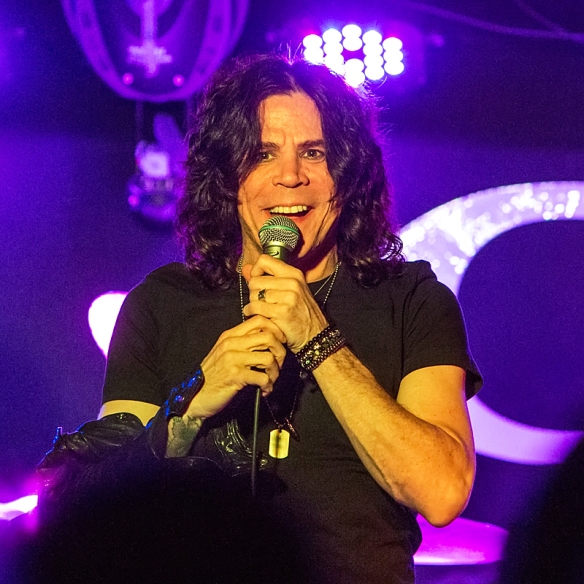 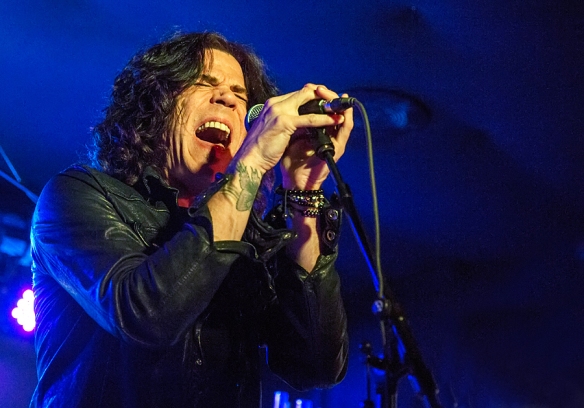 2 thoughts on “An Intimate Night With TNT”