There is one thing that must become a tradition in Norway. And it is more beautiful than all other traditions. That is the meeting and faux combat between Mannskoret (The Male Choir) from Oslo and Svartlamon Hardkor from Trondheim at the end of January. For many of the choir members, and also many of their friends, this also marks the end of the “white”, alcohol free month of January. I attended this happening last night, which so far is the third meeting between the two choirs.

I have seen Mannskoret before, a couple of years ago, and it was fun to see them again. They were the hosts last night, and had done their best to make Svartlamon Hardkor feel at home. The two choirs have different musical styles, and also different visual profiles. Where Svartlamon Hardkor are dressed in whatever they like, Mannskoret have black suits and white shirts. Their choral style is more classical in its approach, compared to Svartlamon Hardkor, who have a more punky approach to their singing.

Before Christmas I saw Svartlamon Hardkor in Trondheim at their 10 year anniversary concert, and I was impressed by their musical achievements. I was also highly amused, specially when they sang four of the movements from Mozart’s Requiem, accompanied by electric guitar, banjo, Tuba, percussion and accordion. And it really sounded good!

The concert last night started with Mannskoret, who opened with a piece by Felix Mendelsohn Bartoldy, before they sang Full cowboy (Drunk Cowboy) by Gustav Lorentzen. Their next song was Hjernen er alene (The Brain Is Alone), a Norwegian rock classic by de LIllos, which was also a hit with Seigmen. They introduced their last somg of their first set as an introduction to Svartlamon Hardkor: Vuggesang for Trondheim (Lullaby For Trondheim). 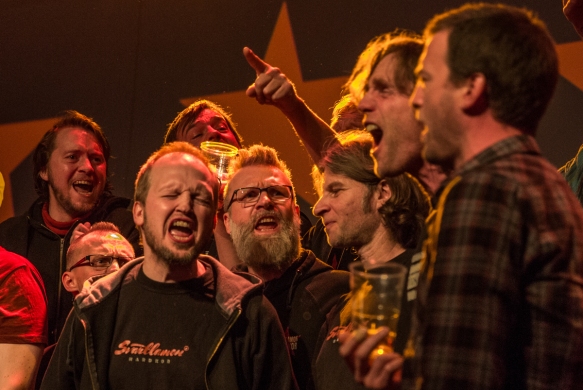 Svartlamon Hardkor opened with what can be described as one of several sprechgesang numbers, where the lyric was essentially one word, “kuk” (cock). What they lack in finesse, they double up in energy and enthusiasm. The last time I saw them, they had instrumental backing on some songs, but last night was pure a cappella. They got wild applause for they efforts. 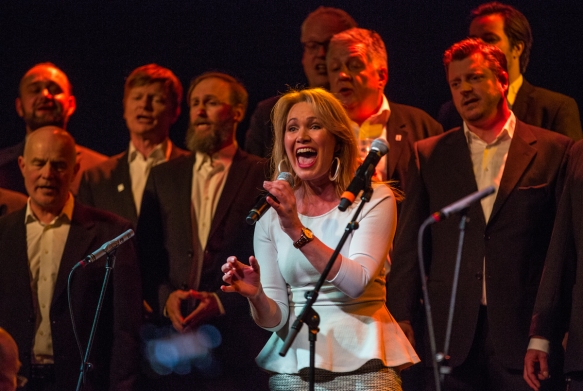 When Mannskoret came back, they presented their guest for the night, Benedicte Adrian, from the Norwegian duo Dollie De Luxe, the only female performer at the whole concert. She had no problems in standing her ground, even if their first number together was Frank Zappa’s infamous song from Joe’s Garage, “Why Does It Hurt When I Pee”.

Svartmanon Hardkor answered the guest challenge with Stein Torleif Bjella, whom I saw with the choir before Christmas, too. Bjella is known for his humorously depressive lyrics, and he and the choir is a perfect match. After two songs with Bjella, and one more from the choir, another set by Mannskoret, both choirs entered the stage for the finale. First a Svartlamon Hardkor special, a long gradual increase in volume and pitch towards a climax. And as the last song they performed the classic Knutsen and Ludvigsen song together, Kanskje kommer kongen (Maybe The King Will Come). 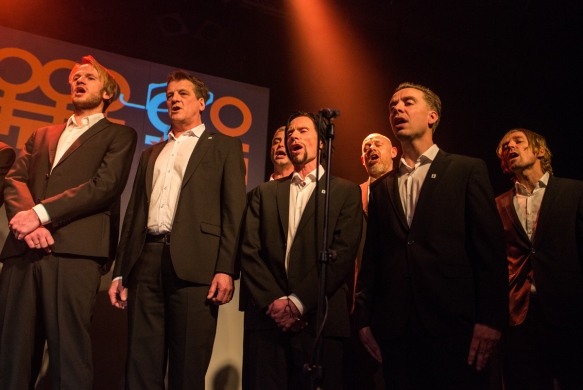 All together it was a great night, funny and also with many artistic moments. What made is better than a concert with only one of the coirs, is that they both have the same what-the-fuck-attitude, but they sound quite different. Mannskoret focuses more on the classic choir tradition, but with mostly rock songs. Svartlamon Hardkor is the punky brother who focuses more on energy and expressiveness than on bel canto. Both choirs are serious in what they do, and if you want to see them live together, the next chance is at Steinkjerfestivalen the last weekend in June. I will certainly be there!