Tony Visconti is the boy who grew up in Brooklyn, moved to England and become one of pop music’s most famous record producers. The list of artists he has produced or worked with is long and impressive: David Bowie, Marc Bolan, Paul McCartney, Angelique Kidjo, Elejandro Escovedo, The Moody Blues, Manic Street Preachers, Iggy Pop, Thin Lizzy and many others. This year he was the keynote speaker at SXSW.

In 2008 Tony Visconti released his autobiography, Bowie, Bolan and the Brooklyn Boy, and I can recommend the book if you are interested in pop history. Cisconti gives some excellent insights into the world of pop music and record production. He started his keynote by asking a retorical question: – Have you ever wondered where the echo on records comes from? I think I was 5 when I started to wonder how they made that sound on the records. 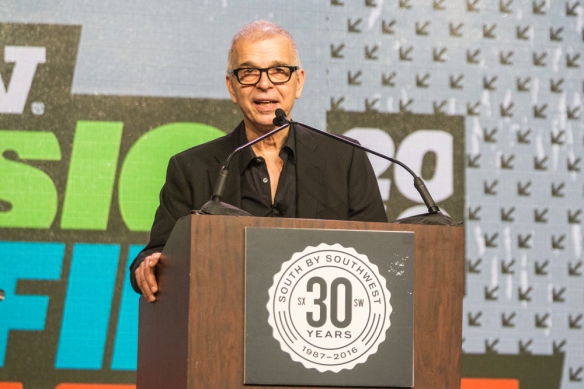 – My father was a guitarist, but he sometimes abused me with the accordion. The accordion can sometimes be an instrument of torture. He also sang in a barbershop group, and I thought everyone could sing four part harmony. When I went to school, I discovered that I came from an extraordinary family.

– I started playing the guitar at 11, and my teacher stressed how important it was to be able to read music. I have been in the music business for 50 years, and I think that is much because of my being able to read music. – My guitar teacher got me a ticket for a Gretch guitar convention where Chet Atkins would play. I learned that he played with a stereo guitar where he could lead the lead strings through a reverb unit, the chord strings through a slap back echo, and the bass strings through an octave splitter to get that deep bass sound. That was quite high tech in the mid 50’s.

– My first musical background was Tommy Dorsey, Glenn Miller, Chet Atkins, Les Paul and Mary Ford, plus the Brooklyn borough where I grew up amidst many different cultures.

– When I was 15 I played bass in school. My teacher taught me to read the bass clef, too. I remember getting to attend a rehearsal at Carnegy Hall with Leonard Bernstein conducting the orchestra. During the rehearsal he ran down the aisle and stood there listening to the balance in the orchestra. That fascinated me inmmensely.

– The other driving force for me was Rock ’n’ Roll and New Orleans. Fats Domino, Buddy Holly were my heroes. I could not understand how Holly got that Stratocaster sound. I was fortunate enough to see my heroes, hosted by the DJ Alan Freed. Buddy Holly played That’ll Be Yhe Day. I was 12-13 at that time. – You couldn’t make money playing rock ’n’ Roll in those days, so I played weddings. I was making more money than my dad playing three weddings every weekend. I was bringing back $300 a week. I had learned the songs I needed for these occasions.

– The thing that changed my life completely was when I heard I Wanna Hold Your Hand in 1964. That song had more chord changes than my heroes Fats Domino and Buddy Holly, who had maybe 3 or 4, while The Beatles had like 8. I decided that I had to go to London. When I saw how George Martin worked with The Beatles, producing, arranging music, I decided that I would be that guy who can do whatever is needed to make music.

–  My publisher, Frank Richman, told me one day that: I have listened to your demos, and I don’t like your songs. I thought that there goes my chance of world domination. But then he said – I love the sound of your demos, so I want to make you the house producer. One day at work I met an Englishman, Denny Cordell. He was the producer for our sister company in London. He played a song for me with a long organ intro that sounded like Bach. That was A Whiter Shade of Pale with Procol Harum. He had a recording sessionin New York with a British artist, and I was allowed to write the arrangements for his musicians. I had one hour to write it, but the song became a hit in England. I was invited to come to England to produce for Denny in England, so I moved there.

– Through Denny and David Platt I was invited to meeet Davis Bowie. I had worked with Marc Bolan and Tyrassosaurus Rex, so I had a reasonably good reputation. We got on great, we liked the same underground music, Velvet Underground, etc. We took a walk, continuing talking, and we found we also liked the same kind of movies, and the day turned out to be almost a date.

– The thing David Bowie did best was when he picked up his 12 string guitar. David was being dropped from his record company. We recorded the album that contained Space Odissey. I revolted to that song, being an idealistic, pinko hippie. His new record company wouldn’t release the album without the song, and I recommended Gus Dudgeon who did a great job with that song. I produced the rest of the album, plus Life on Mars. – I worked with Bowie on 14 albums, I produced the last one, Black Star, and I have worked my butt off.

– From Bowie I took Marc Bolan, another folk artist to become a rock star. I always put strings on the songs, and one day I got a call from Paul McCartney, who wanted me to write arrangemnts for his new album, Band On The Run. Paul showed me what he wanted, and I wrote it out.

– There is a down spiraling thing going on now, where songs sound the same, specially the ProTool songs and it is difficult to make mony. In my book I left out the juicy parts because I didn’t want to hurt people’s feelings. I lived in the best of time, listening to Hendrix, Joni Mitchell, The Beatles.

Tony Visconti ended his keynote with reading from his new book, a dstopic fable about where the music business is ten years from now. – I am the ghost from the Christmas Charrol, and this is how it can be. But it doesn’t have to. Labels – your product is culture. We live in a time when Trump is going for president, and a meal is a MacDonalds. The songs you release for the fickle teenage market is made on a computer.

He made a strong call to the major record companies, of which many of them certainly was present in the room, saying that the situation can’t be worse than now, and now is also the time to turn around and start valuing and nurturing talent. The quick fix today that getting a hit is considered luck, and that anyone who uploads a self produced song on YouTube can become famous, is destroying the music industry. The question is, of course, is if it is too late, since the distance from the good A&R people at the major record companies to the top decision makers is already too long to change strategies. Only the future will tell if Tony Visconti is right.