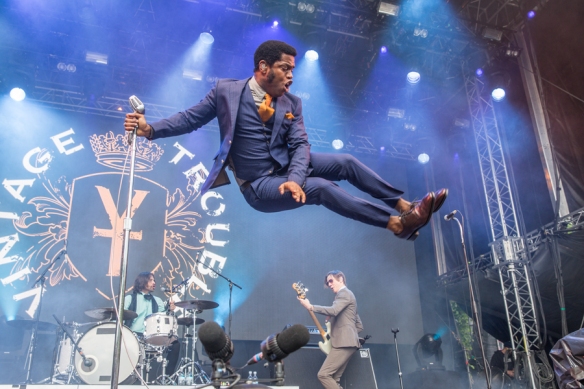 Bergen Fest is usually my first summer festival every year, and I always look forward to this festival. They have a good booking, the organizers are extremely professional and also friendly, and there is a good spirit there. This year’s festival started out Wednesday night with Biffy Clyro as the headliner, and with top performances from Vintage Trouble and many other artists. (Photo above: Ty Taylor from Vintage Trouble)

The crowd for Biffy Clyro

Bergen Fest is a typical adult festival, with the average age closer to 30 than 20. This also means that they can have a quite eclectic booking and get away with it. The first day of this year’s festival is a good example of this. Israel Nash, Vintage Trouble, Michael Kiawanuka, Patty Griffin, Band of Horses, Yeasayer, London Soul and Biffy Clyro. Those artists cover quite a few music styles, and if you add the artists for the other day, very little is missing. 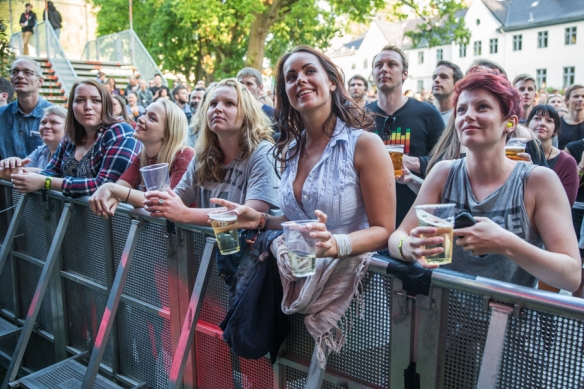 Typically such a diverse booking should cause some problems for the organizers, but at Bergen Fest they manage to balance this in a perfect way. I always discover new artists here that I might have heard of but haven’t actually heard and seen, and this happened already the first day with Vintage Trouble.

Israel Nash was the first artist out on Wednesday. With a band consisting of guitars, bass, drums and steel guitar, he had the perfect sound for a sunny afternoon where the venue filled up during his show. Israel’s voice is beautiful, but also powerful, and his music is pure americana and country rock. Israel Nash’s Silver Season is  his latest album, and well worth listening to. They played several songs from the album, of which Parlour Song is my favorite. 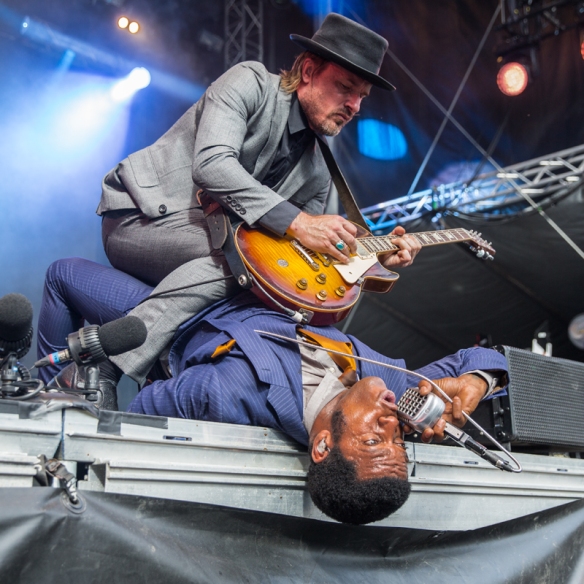 After Israel Nash, Vintage Trouble opened on the big stage. They are a retro soul/rhythm ‘n’ blues band with one of music’s hardest working singers, Ty Taylor. The setup is straight on, guitar, bass, drums and vocals, and it worked like a charm. Ty teases and commands the crowd, that got bigger and bigger during their set to sing along. He went out in the crowd and crowd surfed back to the stage, he jumps and struts along on stage, with the band backing him all the way. 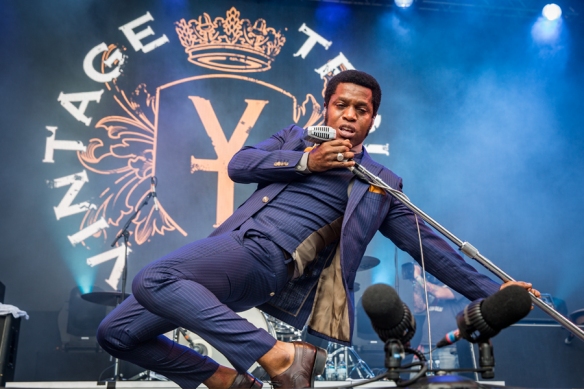 No wonder Vintage Trouble have been on tour as support for The Who, AC/DC and the Dave Matthews Band. In a short while they should be able to be booked as headliners for big festivals. Even if their name isn’t as well known everywhere yet, they deliver a performance that outpaces many of todays biggest names. Check out their music, and specially 1 Hopeful Rd. that came out last year.

Michael Kiwanuka is the British soul singer who has been compared to Bill Withers, Otis Redding, Randy Newman and Van Morrison(!). His voice is beautiful and reminds me more of Bill Withers than the others. His music is modern soul in an old style, if that makes sense. I’ll Get Alone is a good example of this. His so far best known song, is the title track from his 2012 album Home Again. In 2012 he won BBC’s award for Sound of 2012. On stage Michael Kiwanuka focuses on the songs, with little extra show. But with songs like his, it doesn’t matter, and the crowd at Bergen Fest loved the performance.

Patty Griffin is one of the best singer songwriters on the American folk scene, having received several awards for her songwriting and performances. Her songs have been covered by artists like Dixie Chicks, Linda Ronstadt, Bette Midler, Solomon Burke and Kelly Clarkson, and she has performed with Emmylou Harris, Kris Kristofferson, Robert Plant and several others, when not playing solo. In Bergen she performed solo with a guitarist, and we got to hear many songs from her newest album, Servant of Love plus older songs. 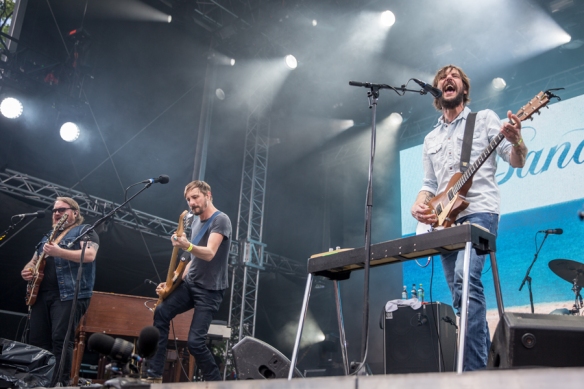 Band of Horses have played many Norwegian festivals the last years and this year is the fifth time I have seen them. Their force is their songs, not the performance. The band’s style has been described as southern rock and indie rock, but with a touch of americana. The sound is guitar based, but with the singer Ben Bridwell playing steel guitar on some of the songs. Their performance on Wednesday night in Bergen was good, but not exceptional in my ears and eyes. 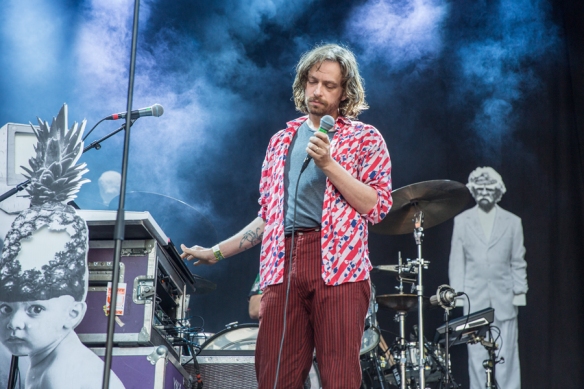 Yeasayer is a band I know of, but haven’t seen live before. They are described as a  progressive, experimental rock band, also psychedelic pop. To me that is slightly pretentious after having seen them live. On album the description is closer. The band had problems during their first song, where the bass didn’t work. But when they fixed the problem, they were up to speed. The crowd seemed satisfied, and that is the most important thing. Check out their latest album, Amen & Goodbye. 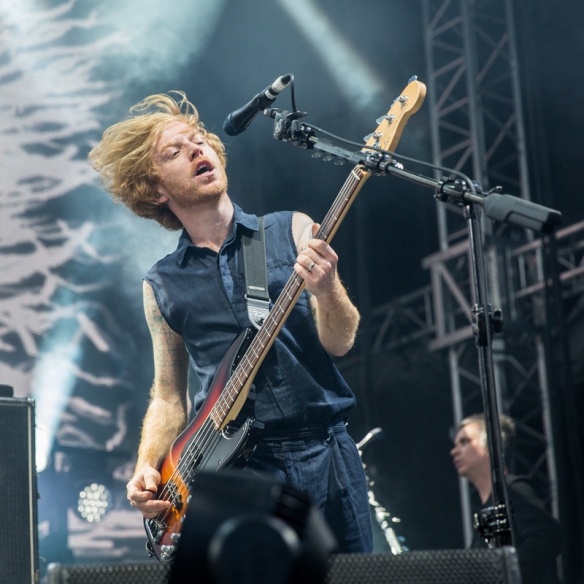 Biffy Clyro were headliners at Bergen Fest in 2013, and I remember I was impressed by their show. They were much harder live than on their albums. This year they are even harder, and gave us a potent and hard rocking show. Their songs are actually quite complex, but the delivery makes live works very well. The changes between soft and hard with very sudden changes makes Biffy Clyro one of the more exciting live bands today.

It doesn’t hurt that singer and guitarist Simon Neil has a very charismatic stage presence. His communication with bassist James Johnston and brother Ben Johnston is also perfect. For the first time on the opening day, the band had hardcore fans up by the barrier. The knew the songs and sang along with all of them. It is interesting to have seen Biffy Clyro several times the last six years, and to observe them going from a more than competent live band to becoming what they are now, a perfect headliner for big festivals. Their new album Ellipsis will be released early July. 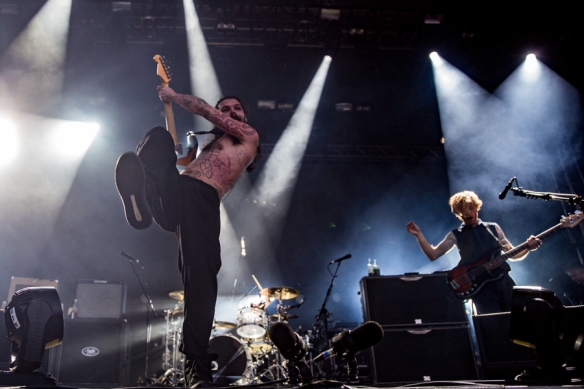