Thursday at Bergen Fest had a couple of my favorite bands – live and on album – plus some new ones. Wilco has long been a favorite since I saw them the first time at Norwegian Wood in 1999. I have seen Ghost several times the last years, and love their pop version of black metal. Sigur Rós isn’t my personal favorites, but they always make a great live show. Here are the artists I saw last night. (Photo above: Ghost) 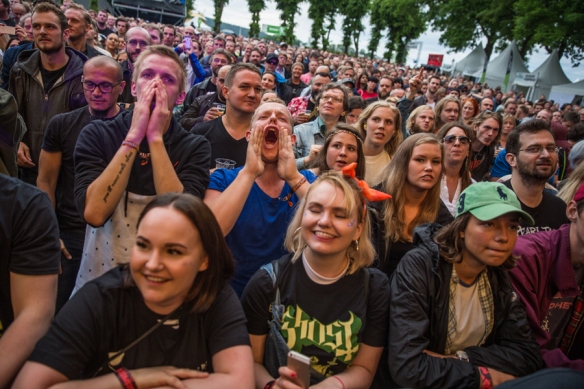 On the second day of Bergen Fest 2016 we got a little rain early in the afternoon, but not enough to make it unpleasant. Most of it came during Wilco’s show, but the temperature was pleasant. Last year it was freezing cold with rain and a wind, so this year has been a pleasure, when it comes to the weather. 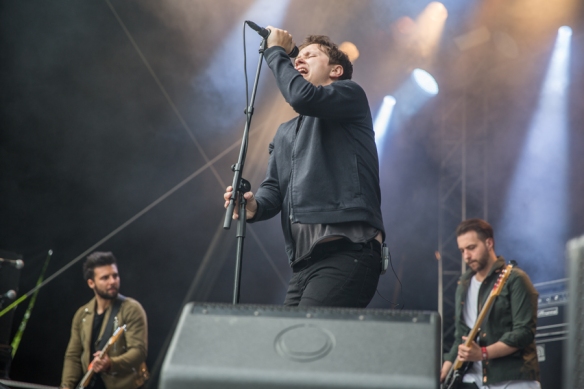 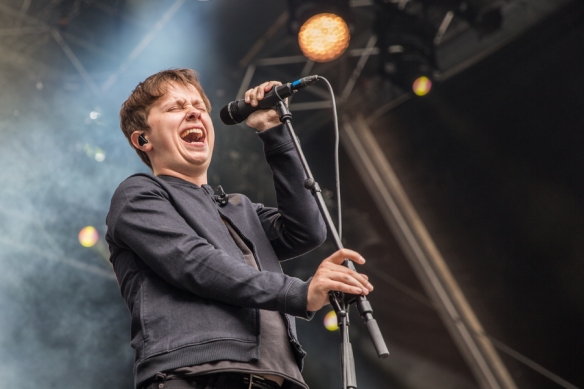 First out Thursday were Nothing But Thieves from England. Potent pop rock with some great vocals by Conor Mason and hard and precise playing from the rest of the band. It is refreshing to hear a guitar based band that have such a variety in their songs and arrangements. The band’s self-titled debut album came out in 2015 and did well on the British charts. Lately the band have supported Muse on tour.

Wilco was the first band on the big stage, and I was a bit apprehensive to how their show would be. The last time I saw them, Jeff Tweedy didn’t smile the whole concert, but yesterday showed him from a much brighter side. He looked genuinely happy to be on stage. The band is utterly professional and it seemed like another day at work, but with bands like this, that is often much better than many others. We got songs from their latest album, Star Wars, plus from their whole catalogue. 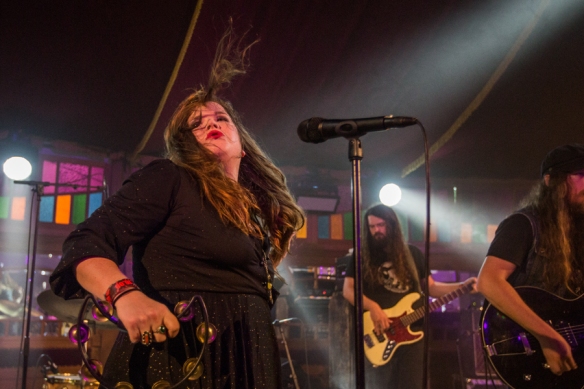 After Wilco I moved over to the Magic Mirror tent to see Banditos from Birmingham, Alabama. And I didn’t regret it! A band that has a song like Still Sober (After All These Beers) is a must see. Their music is a mix of bluegrass, rockabilly, rock and punk. An important ingredient in this mix is singer Mary Beth Richardson. She sings like a combination of Beth Hart, Etta James and Janis Joplin, and plays the tambourine like a pro. If you have the chance to see them live, do that! While you are waiting for them to come to your time, you can put on their latest album, Banditos from 2015 end enjoy. 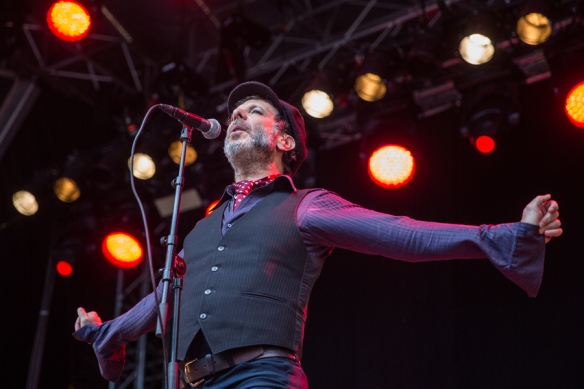 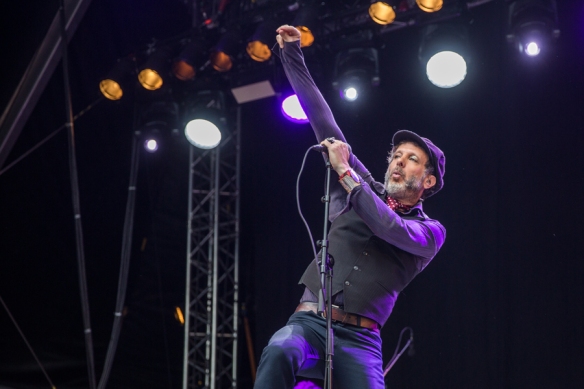 Mercury Rev played the second stage after Banditos, and they were the veterans among the artists Thursday. The band started in 1989, and two of the (almost) original members are still there – Jonathan Donahue and Sean “Grasshopper” Mackowiak, Donahue starting in 1993. I saw the band at a concert in ten years ago, and then at SXSW this year. Their music is sometimes dreamlike with floating soundscapes and Donahue’s dramatic voice on top. Since SXSW in March they have got a new bass player, but the rest of the musicians are the same. Listen to their 2015 album The Light In You and their commercial breakthrough from 1998, Deserter’s Songs. 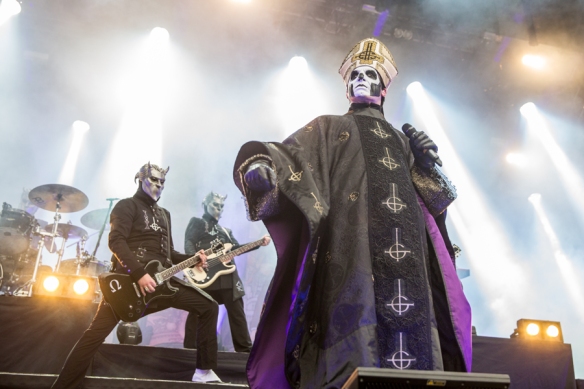 Ghost was next out on the big stage. They are a Swedish metal band, known for their masks and clothes. Their music is more varied than many black metal bands, but still based solidly in the metal tradition. Singer Papa Emeritus III performs clothed like a pope, and the number “III” changes for each time they changed their appearances, the old pope dies and the new arises. This year the band has donned their monkish clothes, and the band members have all devil masks, while Papa Emeritus III has paint and no mask. 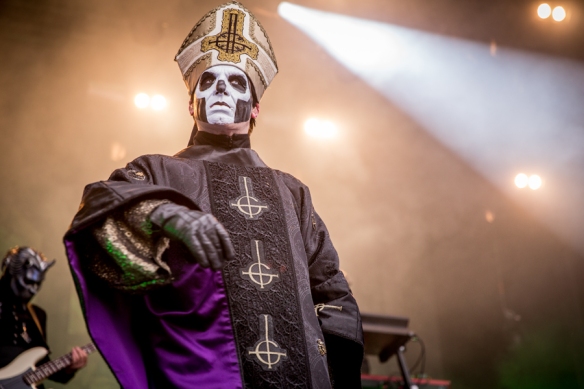 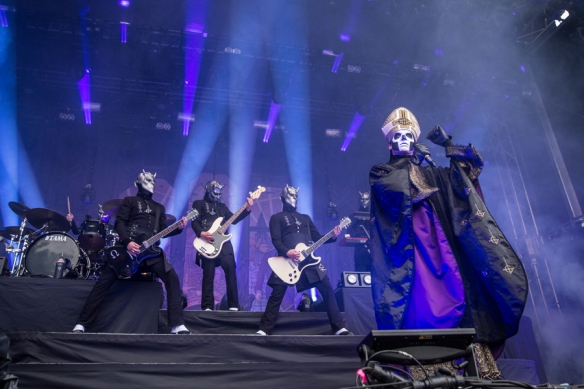 I notice that I like the band more for each time I see them. My first time was at the Øyafestivalen ap. 2010. Since then it has been a few more times, and their performance last night was so far my best Ghost experience. They have full control over the crowd, and there were enough of their hardcore fans to make it sound really good when they sang along to their songs. Musically and in their lyrics the band have a leaning to the Satanic belief, exemplified in their catchy song Year Zero. They also put renaissance church music in their mix. If you haven’t seen them before, you can start with Infestissumam from 2013 and the move to last year’s release, Meliora. 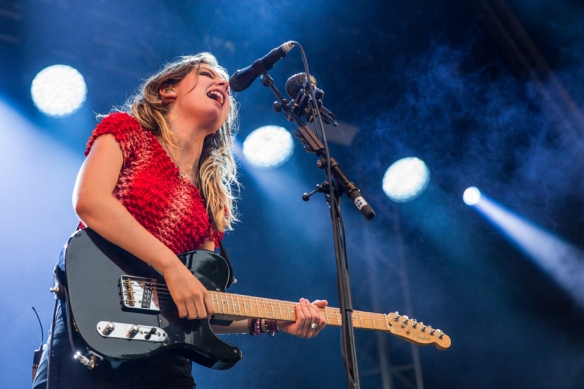 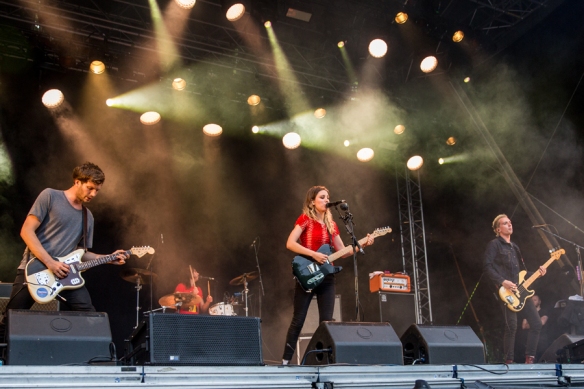 I heard much good about Wolf Alice before I saw them perform after Ghost. They are British and their music is a mix of indie rock, some folk rock and some harder elements. It works well, both live and on CD, but they still have a little way to go before they become a great live band. Everything is well played, and singer Ellie Rowsell has a great and versatile voice. Their singel Moaning Lisa Smile made it high up on the charts, and they released a full length album, My Love Is Cool, in 2015. 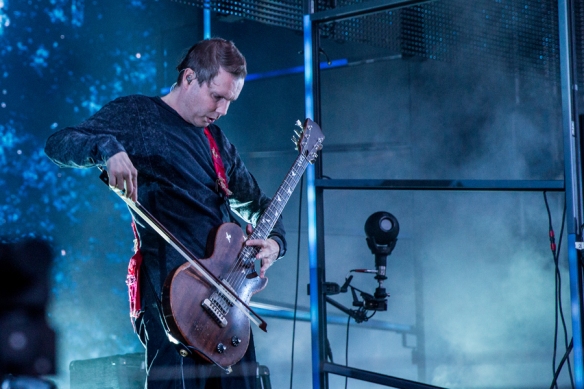 Sigur Rós was yesterday’s headliners. They have a very elaborate light design on stage that works well for the crowd. The band itself are among the world’s most eclectic bands, doing everything their own way. The first two songs were performed behind a digital screen, and the rest of the concert in front of it. They have always mixed electronics with the more organic elements, but to me the electronic bit is more in front now than before.

Singer Jónsi Birgisson has an angelic voice, and he plays his guitar with a bow. The last time I saw the band, at Oslo Spektrum in 2013, they had some extra musicians, while yesterday they were the three main members of the band. I hav to say a few word about the band’s photo restrictions. Photo was forbidden in front of the band, meaning the photographers had to stand on each side of the stage, having quite hopeless angles and hindrances to battle with. But that is just a photographer’s complaints, while the crowd enjoyed the concert immensely. 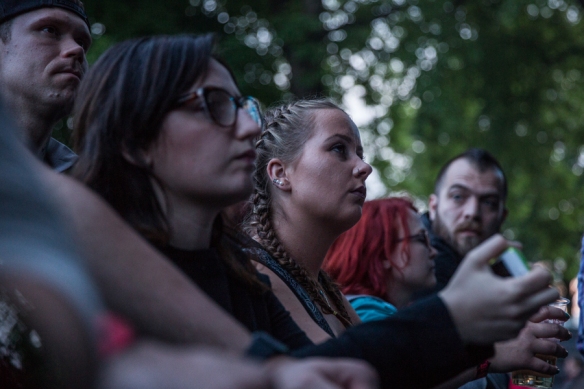