Bergen Fest has been a long time tradition for me, all the way back to the 90’s when it was called Ole Blues and was a club festival with mostly blues artists. Now it is an outdoor festival in historic surroundings in Bergen, and with one of Norway’s best bookings, big headliners and many lesser known but definitely very interesting artists. Yesterday I saw Nick Cave and Sparks, but also The last Internationale, which became one of the highlights for me. (Photo above: Nick Cave)

Bergen is located on the wet coast of Norway, which means that they are more prone to rain and winds during the year than the eastern part of Norway. Yesterday was dry and cloudy, a little bit colder than ideal, but elsewhere great weather for a festival. Today will be a challenge, with steady rain and wind gusts that might blow the rain up on the stages. More about that tomorrow. 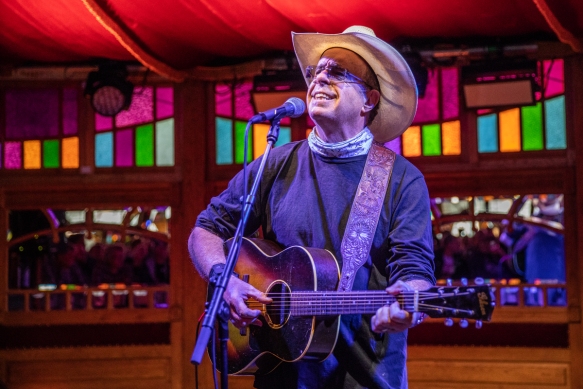 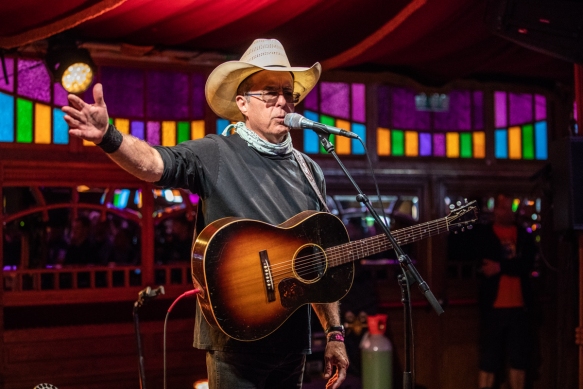 My first concert at Bergen Fest this year was Tom Russell on the Magic Mirror tent stage. Russel is one of the best storytellers and songwriters around, and his songs have been covered by johnny Cash, Joe Ely, Dave Alvin, Doug Sahm, Iris DeMent, Nanci Griffith and a lot of other renowned artists. Since his great grandfather was Norwegian, Russell has a special relationship with Norway, which comes forth in a few of his songs and albums, like the album The Man From God Knows Where and the song St. Olavs Gate (a street in Oslo, Norway). His concert at the Magic Mirror was typical Tom Russell, great songs, tall stories and a great rapport with the crowd who knew his songs. 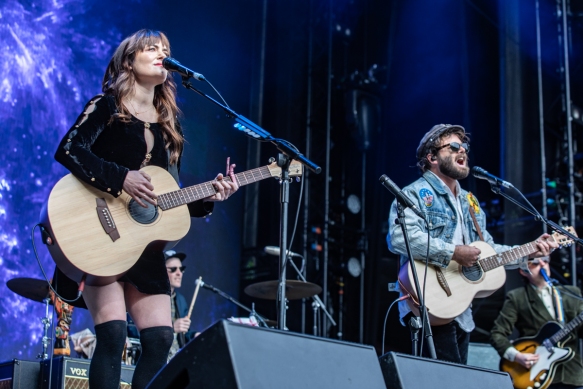 After Tom Russell Angus & Julia Stone opened at the main stage, Plenen. They are an Australian duo, the first of three Australian acts this day. Angus and Julia are siblings and they started playing together in 2007. They also write their own songs and have won several Australian awards for their albums and songs. Their 2010 album Down The Way won five prices at the ARIA Awards. The band’s performance was good, but I missed some more dynamics, it became too introvert for me. 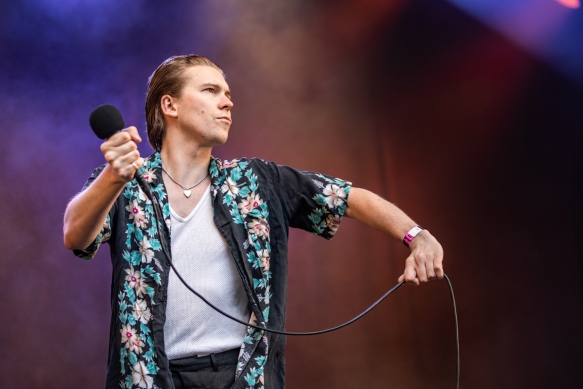 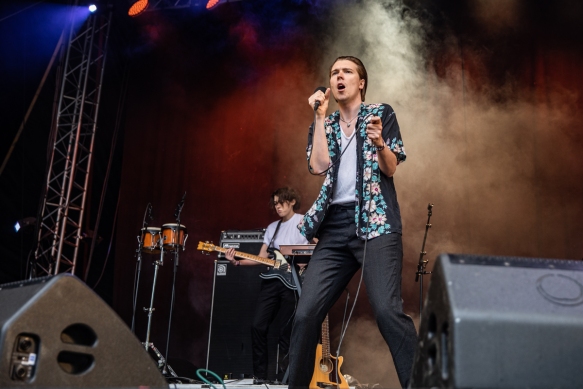 Alex Cameron was the second Australian act Wednesday night. His music is indie pop, but quite different from Angus & Julia Stone. Cameron hasn’t had a very long career, but has got a bit of traction the last years. His self-distributed debut album from 2010 was re-released in 2016 when he got a record deal, and in 2017 he released his follow up album, Forced Witness. Alex Cameron says that he likes to write about the unsuccessful people, “failure has been underexplored in music.” His live show is mostly about his songs without much other effects, but the band sounds good and the songs are great, so I enjoyed the concert.

After Cameron we were ready for some theatrical music by the cult band Sparks. They have been active for 50 years and give no indication to giving up yet. Sparks are brothers Russel (vocal) and Ron Mael (keyboard). Since their first album, calling themselves Hafnelson, they have reinvented themselves several times throughout the years. Their first big success came with This Town Ain’t Big Enough For Both Of Us in 1974. Their latest release is Hippopotamus from 2017. In between they have been a synth duo in the 80’s and have also made an album with Franz Ferdinand, called FFS. Spark’s style is theatrical songs, many of them sounds like musical songs, their lyrics are often quirky, and on stage Russel uses the whole stage, while Ron is sitting totally still behind his piano with a deadpan look through the whole concert. 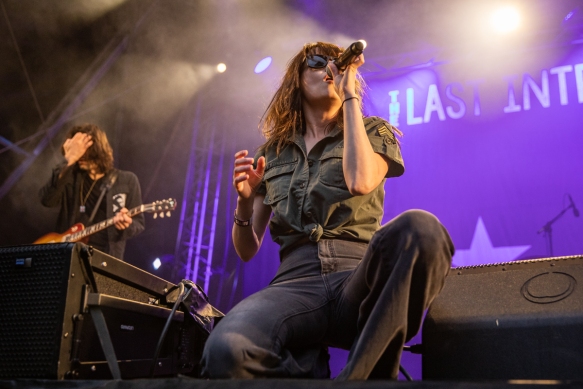 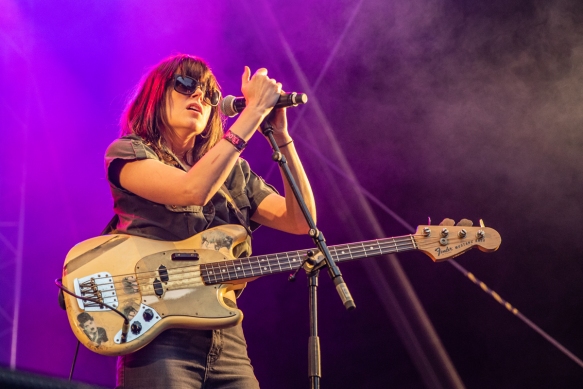 As usual at festivals with more than one stage, there are some collisions, and my first difficult dilemma came after Sparks. I had the choice between John Moreland, Kiryama Family and The Last Internationale, and I am glad I chose the latter. After several indie pop, art pop and folk artists, it was good to get a straight rock ‘n’ roll band. The Last Internationale is a trio with singer and bass player Delila Paz and guitarist Edgey Pires plus a highly competent session drummer. Guitar, bass, drums, socially conscious and sometimes highly political songs, great playing and Pires jumping around on stage like the Duracell rabbit made them my first real highlight this night. If they play at a venue near you, go see them! 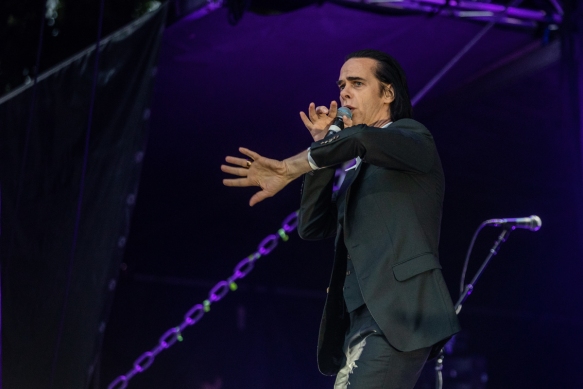 The headliner on Wednesday was Nick Cave. The last time I saw him was at Bergen Fest in 2013, but the concert last night was the best I have ever seen him. From the first song, Jesus Alone, where he walked out on the barrier to the audience to the last song where he had invited people up on stage. In between we got highlights like Into Your Arms, Red Right Hands, Into My Arms, Tupelo and Stagger Lee.

Nick Cave is not the most agreeable person in the music world, and he is also known for his animosity towards photographers, At the end of the first song that we were allowed to shoot, he shushed the photogs out of the pit in an arrogant way. But I am almost willing to forgive him his manners, since he is such an extraordinary artist. His show is seldom extrovert, the songs are dark and the delivery likewise. His shows are like a dark mass with The Prince of Darkness as the ceremony master. As always he performed in his black suit, and he is also quite theatrical, but in a totally different way than for instance Sparks. Nick Cave always give great concerts, but sometimes like last night he gives that extra that transcends it to a special moment that will be remembered by everyone present. Here is the setlist from the concert. 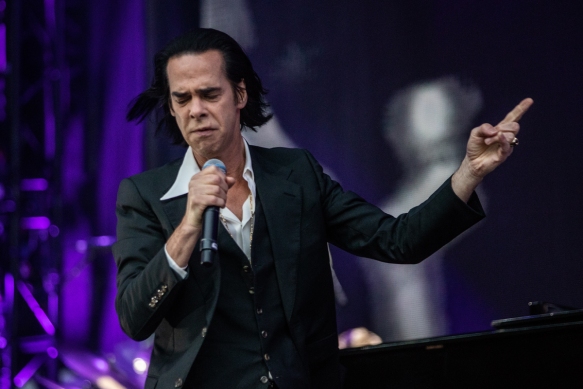