10 years ago I attended an exclusive showcase indoors at Stubb’s with Norah Jones, where she played songs from her new CD, Come Away With Me. That tile there was no problem getting in at the small venue. This year she presented her new CD, Little Broken Hearts at La Zona Rosa, and half of the people waiting in line didn’t get in. 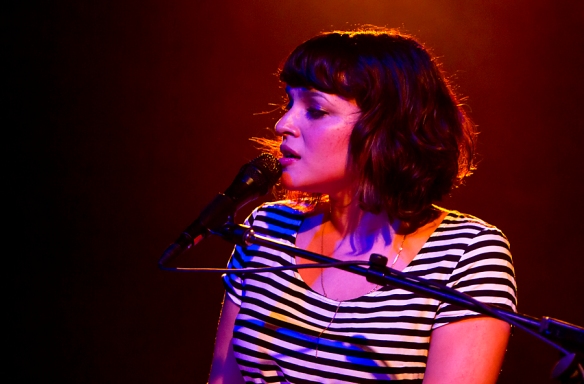 Since 2012 Norah Jones has released three more CDs, played in a movie, won a lot of Grammys, sold over 40 million CDs and been named the top jazz artist of the first decade of the 21st century.

The line outside La Zona Rosa for her show was immense. At least half of the people waiting never got in. SXSW has a system where delegates can apply for a priority card for one venue per day, and this was one of the days where this was really useful.

What I heard from the songs she played while I was there, she has departed a bit from her earlier works. Danger Mouse (formerly among other things from Gnarls Barkley) has produced and cowritten most of the songs on the album. From the live performance his touch was audible in some of the sounds and the different approach to the songs and melody lines. But it is difficult to judge form a first time hearing them.

Norah Jones herself looked happy and she did a great performance, on keyboard with some knob-turning, and also on the guitar. The CD, Little Broken Hearts has May 1 as a release date.

All the pictures here are © All Rights Reserved: Per Ole Hagen.

You can see these and other pictures of Norah Jones at my picture site, Artist Pictures.