The Notodden Blues Festival is the biggest blues festival in Norway, and it is also wll known internationally, as being a part of the Mississippi Blues Trail. This years festival is number 26, and 2013 is also the city Notodden’s 100 year anniversary. I have visited the festival every year singe 1994, and it is one of my festival highlights every year. So far, this year will be no exception. (Picture above: Good Time Charlie)

As tradition dictates, the festival is opened with a free show at the town stage (Hovig’s Hangar) Thursday afternoon. There are speeches, the Blues Prize is given out – this year to Notodden Kommune – and many of the bands play one or two songs each. The show is lead by two of NRK’s radio hosts, Bard Ose and Robert Satervik, and it is broadcast on NRK P1 the same night. NRK P1 also broadcsats three hours live on Friday night and two hours on Saturday, plus they record 16 of the concerts for later broadcast.

Veronica And The Red Wine Serenaders

More than 3000 people attended the opening, and the artists who played were the winners of the European Blues Challenge this year, Veronica And The Red Wine Serenaders from Italy, the Norwegian band Norske Menn i Hus og Hytte, Good Time Charlie, Charlie Musselwhite and BigBang. 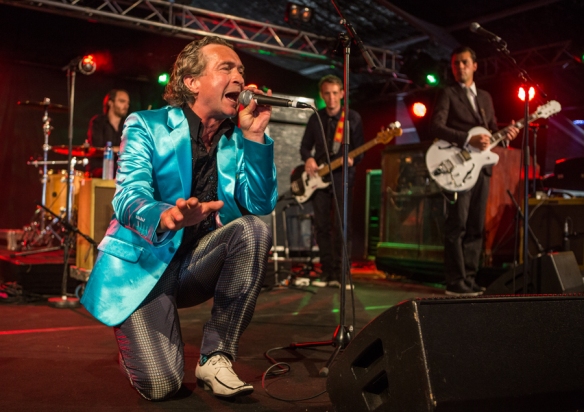 After the opening ceremony, three bands split the evening for the real concert opening. First out was Good Time Charlie. They have played together for 30 years, and have changed their style gradually from 50’s blues to “garage soul”. To me they sounded fresh and I like their newer stuff very well.

Charlie Musselwhite is one of the grand old gentlemen in international blues. He is the master of the harmonica and is also a great singer. The concert with him and his band was the highlight for many of the more hardcore blues fans in the audience.

The last band out the first night was BigBang, who cater to a younger more rock oriented audience. But it worked extremely well this night. BigBang is one of Norway’s best live bands, and they have an enormous routine on stage. When they also have great songs and play them extremely well, combining this with a charismatic stage presence, it is a receipt for a successful concert. I have seen the band many times, and this was definitely one of the better concerts I have seen with them.

Here are some more pictures of the artists the first night.