Nick Cave is and has been the most influential Australian artist for the last thirty plus years. Both as an artist with Nick Cave And The Bad Seeds, as a songwriter, as a member of Grinderman and also as a writer. September 22nd is his birthday, when he is 56 years old. (Picture above: Nick Cave at the Norwegian Wood Festival in Oslo 2009) 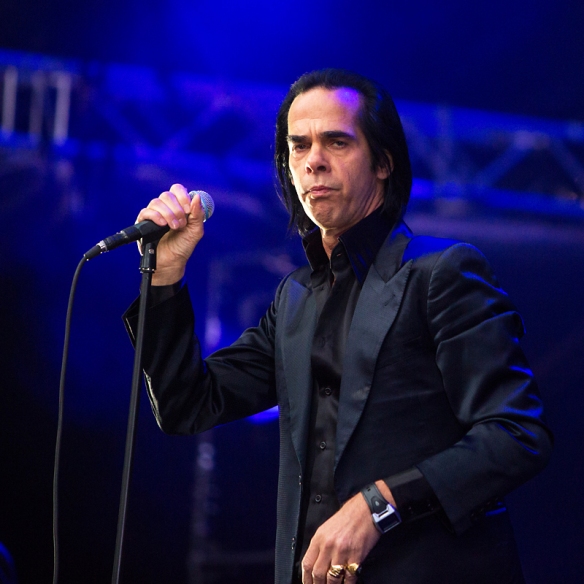 Here are more pictures from Nick Cave And The Bad Seeds at the Bergen Fest this year.

Nick Cave started his music career with the band The Boys Next Door, which changed its name to The Birthday Party in 1980. The were an expressicve punk band that got a cult following in England, Germany and also in Australia. The band broke up in 1984, and Nick Cave started The Bad Seeds with himself as the leader.

From here on he also changed his musical style, to a darker and more introvert expression, coupled with his deep bass. The 20 year period from The Bad Seeds started until about 2004 was a very productive period for Nick Cave. Together with the band he released 15 CDs including what many consider his masterpiece, Murder Ballads, in1996.

Nick Cave at the Norwegian Wood festival in 2009

Murder Ballads was also the CD that opened the mainstream market to Nick Cave. Even if the lyrics are dark and murderous, first Henry Lee, a duet with PJ Harvey, but most of all Where The Wild Roses Grow in a duet with Kylie Minogue was a hit. Minogue’s status as a pop star helped on Nick Cave’s image and the song won many awards. Personally I think the song belongs high up on the list of the best songs since 1990.

Nick Cave with Grinderman at Oya in 2008

After 2000 Nick Cave has released CDs with The Bad Seeds, but also with the band Grinderman that he started in 2006. They have released two CDs and in 2008 they played the Oya festival in Oslo. Nick Cave And The Bad Seeds have played in Norway several times. I have seen them two times, at the Norwegian Wood Festival in Oslo in 2009, and at the Bergen Fest this year.