This summer I had an experience to remember, presenting a photo exhibition in Warsaw. The exhibition, Norwegian Metal in Concert, was hosted by the Norwegian embassy in Warsaw, and staged at the rock club Club Progresja. As part of the package, the Norwegian black metal band Order played at the exhibition. on Friday the band played in their bass player, Rene Jansen’s funeral. R.I.P Rene.

Order is a band, consisting of four of the metal pioneers in Norway. Two of the members,  Billy Messiah and Manheim are founding members of Mayhem, while the other two, Anders Odden and Rene Jansen were founding members of Cadaver, the first Norwegian death metal band to release an LP. Their new band was formed in the summer of 2013, and they had their first gig at Progresja June 25th 2014.

I have known Anders Odden for many years, and he is an important reason why the exhibition came together and also the Norwegian Department of Foreign affairs have bought the rights to the exhibition. He also wrote the foreword in the accompanying book, and with his standing in the Norwegian metal scene. Anders is a good friend and ally.

I met the other members of the band, Billy, Manheim and Rene the night before the exhibition, a great night, with good food, lots of beer and large stories around the table. All of them were friendly, positive and well schooled in music, and I immediately liked them all. Specially their bass player, Rene, who was a soft spoken man with the kindest eyes and a sympathetic attitude.

A video from the exhibition and Order’s concert at Progresja

The opening of the exhibition and the concert went down well, and it was properly noted on Polish TV, radio, in magazines and on different websites. We all went home afterwards, Order to write more songs and prepare for more gigs in 2015. But in September, Rene was diagnosed with leukemia, and in spite of the best treatment he could get, he died on December 3rd.

Rene Jansen’s last wish was that his band should play at the funeral. They played as a trio, with Rene’s bass standing on it’s stand with a band t-shirt draped over it. Funerals are always emotional to me, and specially this one. The eulogy was somber, and his widow delivered a very emotional speech. The black casket was surrounded by flowers, and the chapel was full of mourning friends and family of Rene.

Procreation of the Wicked – Order

Order played two songs during the ceremony – first Procreation of the Wicked by Celtic Frost, and Savage, one of the band’s own songs. I have seen many metal concerts, but none as personal and emotional as this performance. The band played their heart out for their friend Rene.

R.I.P Rene, I didn’t know you well, but I liked you a lot. May you rest in peace. 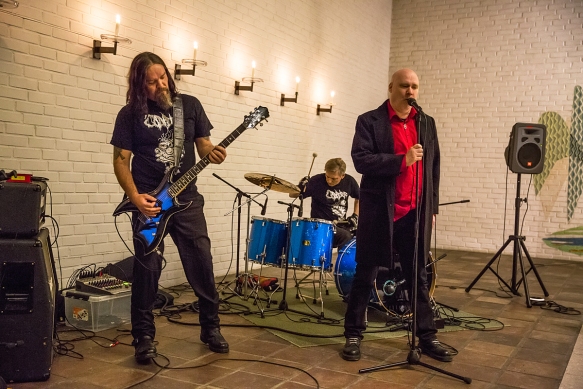 All pictures are © Per Ole Hagen and must not be used without written permission. The videos are © Vilde Lockert Odden.