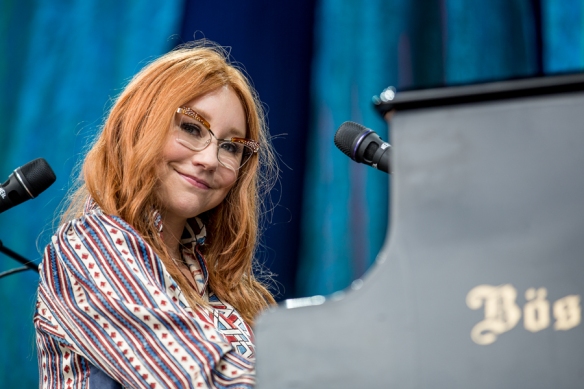 Saturday at Bergen Fest 2015 followed up the eclectic mix from the day before. The headliner was Kygo, Bergen’s own DJ star, then Indie favorites Alt-J, uncompromising Tori Amos with her grand piano. Aurora is another coming star from Bergen, and Seinabo Sey is one of the best things coming from Sweden those days. Put in British folk rock with the Levellers, speed jazz from Jaga Jazzist and some more indie-folk from Kyla La Grange, and you have a mix worthy of one of Norway’s best festivals. (Photo above: Tori Amos)

I saw Seinabo Sey at Bylarm earlier this year, and liked her a lot. But when I saw her yesterday at the main stage at Bergen Fest, I was amazed. Her voice is strong, she doesn’t do much at stage except sing, and her band is tight and gives credit to her very good melodies. Her style is soul pop, whatever first of all it is very personal, and with a full sound that match her voice.

Next out, on the second stage, was Jaga Jazzist. This is an eight piece band that combines jazz, electronica, rock, big band and plays it with en extreme precision and with lots of humor. The band is lead by drummer and composer Martin Horntheth, with his brother Lars Horntveth on guitar, steel guitar, bass clarinet and saxophone, plus sister Line on flute and tuba. The other members are Andreas Mjøs, Marcus Forsgren, Even Ormestad, Øystein Moen and Erik Johannesen. 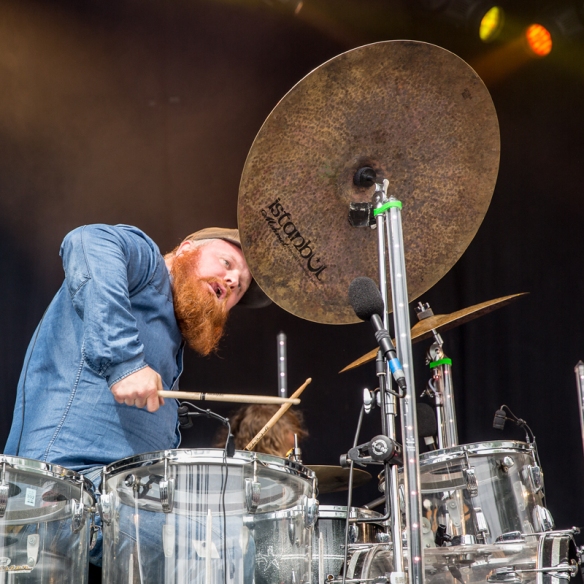 Jaga Jazzist’s music isn’t what I would call easy listening, and you have to be open to get most out of it. But it is extremely catchy when you go into the music, with strong rhythms and spacious melodies. There is also lots of instrumental details in the songs, played on vibraphone, steel guitar, sax, trombone, flute, guitars and keyboard. At times they can sound like a modern day Weather Report mixed with Miles Davis’ Bitches Brew band. I will highly recommend listening to them – start with their newest album, Starfire. And if you get the chance to see them live, you will be amazed.

From Jaga Jazzist it was back to the main stage to see Bergen’s new pop favorite, Aurora.  She is 19 and is working on her debut album, but she is already a mature artist in her songs and her performance, while still being a teenager in her presentation of the songs. She has been noticed for a while, and she played at the Oya Festival last year and Bylarm this year.

So far Aurora has released an EP, Running With Wolves, and here she demonstrates her songwriting and delivery. On stage, in front of a packed venue, she demonstrated that she have no problems with a large stage. She stands still while singing, only moving her arms in a gracious and very personal style. With the right guidance, Aurora can make it big. What I have seen and heard so far is very promising. 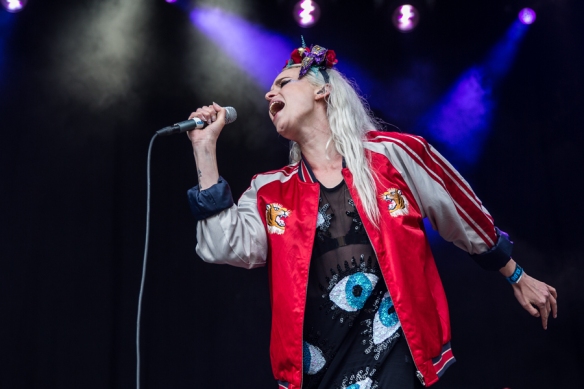 Back to the second stage and Kyla La Grange, whom I haven’t either seen or heard before. That is the charm with festivals like Bergen Fest, I get to see new acts, and since I trust the festival’s taste in music, I am seldom disappointed. Nether so with Kyla La Grange. Her music style isn’t that different from Aurora, but she is more straightforward in her songs, making them more easily accessible. 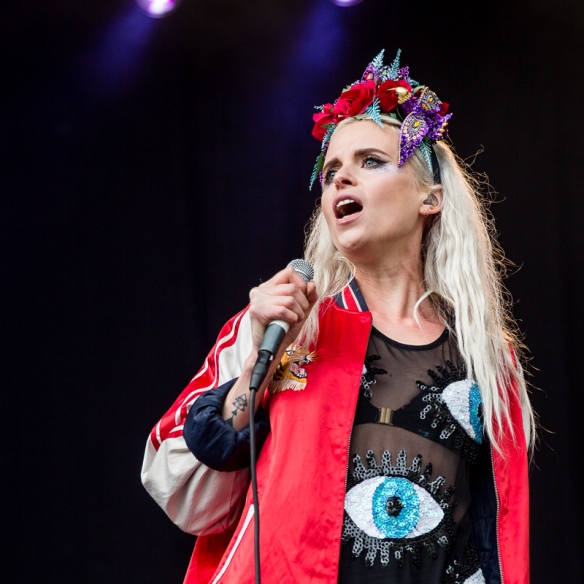 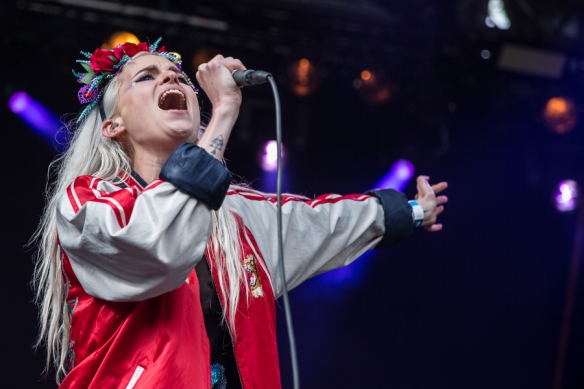 On stage Kyla La Grange is good, with a kind of quirky and ethereal performance. Her voice is part singing, part whispering, reaching some really high notes. She had a very competent band, and the crowd liked her a lot. Personally I need more time to get to know her music. You can start with her latest album, Cut Your Teeth if you want to check her out.

From Kyla La Grange it was back to the big stage and Tori Amos solo on grand piano and a keyboard, which she played separately and together. Tori Amos as an artist is an acquired taste – either you like her, or you don’t. She also tends to be quite unpredictable in her live shows. The day before Bergen Fest, she played at the Norwegian Wood in Oslo, doing covers of well known songs. In Bergen she did a completely different setlist.

I have seen Tori Amos once before, at Norwegian Wood in 2005. Then I found her a bit grumpy and not very interested in the fans. Yesterday at Bergen Fest she was much more friendly, making some small talk and smiling to the audience. Unfortunately many of the audience left during the concert, maybe because the songs, or her versions of them felt too unfamiliar? 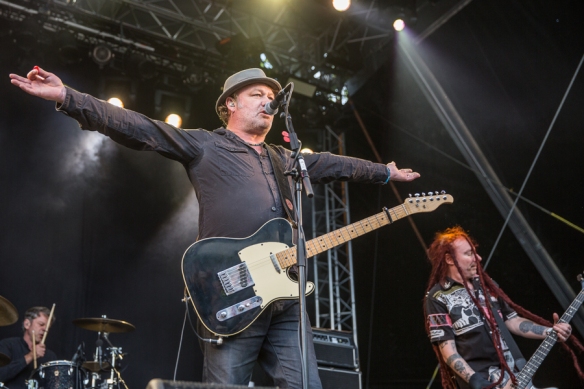 From Tori Amos it was back to the second stage and the British folk punk band the Levellers. They have played at festivals and venues in England and Europe since 1988, playing at Glastonbury, Roskilde and also at Bergen Fest, in 2011. But they should have been much better known here than they are.

The band has much of the same energy as their better known American colleagues in Dropkick Murphy and Flogging Molly. They have had the same members since the start in 1988. At Bergen Fest yesterday they were a refreshing kick ass, give a damn alternative to the good, but more pretentious artist that preceded them. Good, straight forward songs, tight and hard delivery, and with some good details in between. They reminded me a bit of Jon Langford and The Waco Brothers, which is meant as a high compliment.

The last band on the big stage Saturday, was British indie rock favorite Alt-J. They started out in 2007 and won a Mercury Proce for their debut album in 2012, An Awesome Wave.  Musically they are a mix of indie pop with some arty ingredients. They rely heavily on electronics, but have some delicate parts in between with guitar plucking and good harmonies. 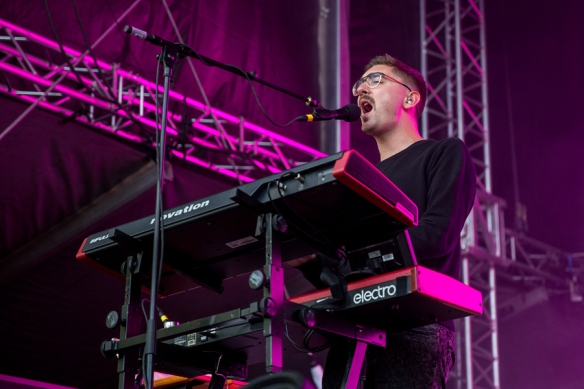 At the concert in Bergen they did songs from An Awesome Wave and from their latest album, This Is All Yours. It seemed many in the audience knew their songs and that they already have a solid fan base. In August they play at the Oya Festival in Oslo, and in between they have a full schedule with festivals all over Europe, so those who missed them yesterday will get a new chance.

The last act out this night, and the one everyone (almost) were waiting for, is the new DJ from Bergen, Kygo. So far he has done remixes of Ed Sheehan, Coldplay and Marvin Gaye, and has become a star in the DJ/remix genre. It is definitely not my favorite music. I must admit I prefer headliners who play more on stage instead of playback of mixes they have made. But with his success, I can hardly blame the festival for booking him.

On stage Kygo was placed high up in a construction of lead lights and screens with live video of him mixed with pre-taped footage. It was impressive, and by far the most elaborate setup at the festival so far. Saturday at the festival has been sold out for more than two months. Combined with the pyro, it was a spectacular show, what I saw of it. The quality of what Kygo does in this style is impressive, and his music has been viewed more than 200 million times on YouTube and SoundCloud.