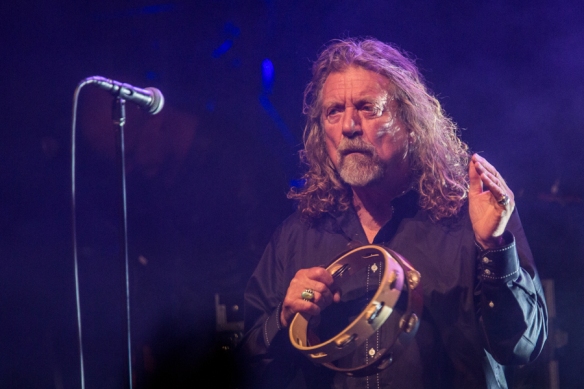 Friday at The Notodden Blues Festival is always more busy than Thursday. The music starts before breakfast is over, and sound checks started even earlier. The traditional blues cruises at the lake started Friday, and the semifinals for the Union Blues Cup was held at the Book and Blues House that was new last year. Friday’s headliner (photo above) was Robert Plant, and everyone were looking forward to it. 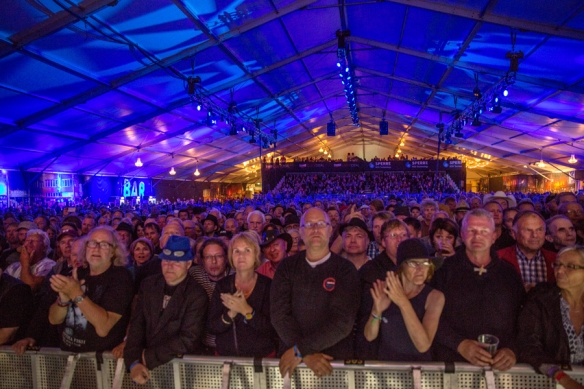 The audience for the BB King Tribute in the tent

To be at Notodden during the festival is a special thing. There are people everywhere, and sales and food stalls are lined up in the main street, which is closed for all traffic. The town center is a gigantic seating area for eating and drinking, and the big tent is beside it, This year the tent is even bigger than before, with a maximum capacity of 6-6500 people. In a country where  arranging outdoor happenings is a high risk venture, this is a smart move from the festival organizers, and it seemed like most of the audience also liked it – some a bit more reluctantly than the others.

My first concert Friday was JD & The Straight Shot at the acoustic folk and blues stage. This is a more intimate stage than the tent, and is a popular part of the festival. Jim Dolan is better known as the owner of New York Rangers’ and much more. But he is a more than average singer, songwriter and musician, and he had a really good band with him on stage. Acoustic, with some great details from fiddler Erin Slaver and guitarist Mark Copely. Check out their recordings from. 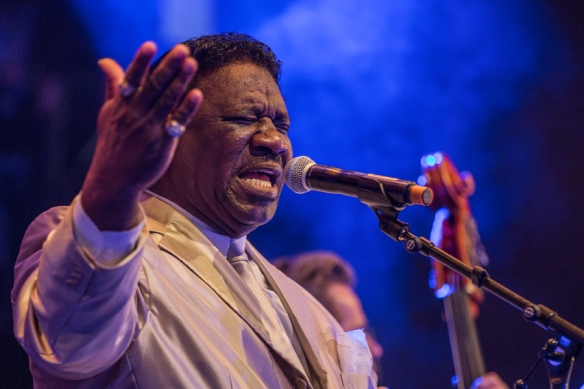 From JD & The Straight Shot I went over to the tent to see the last of the afternoon concerts, Mud Morganfield. He is the son of Muddy Waters with an uncanny likeness to his father. Mud is not just the son of his legend father, he is an accomplished artist by himself, but he would have ben stupid not to include some of his father’s songs in his show. I saw Mud two years ago, and yesterday’s concert was even better in my opinion. 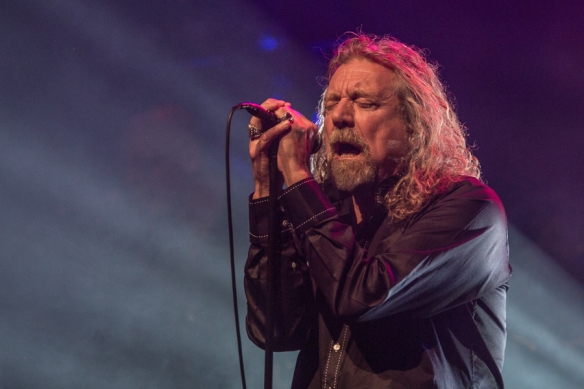 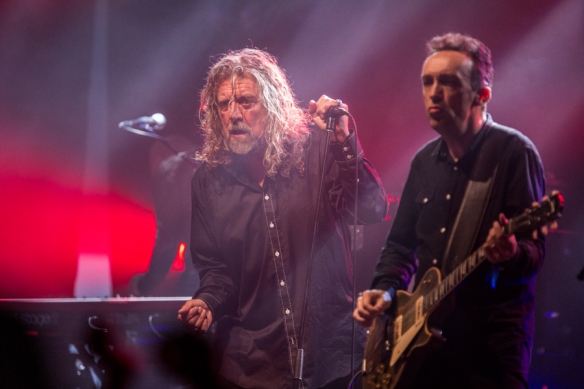 Robert Plant was the first of the early night concerts, and the tent was packed when he started. I have written earlier, from his concert in Bergen last year, that Robert Plant gets better and better, and his concert at Notodden yesterday confirmed this. His trademark stage presence is still there, but more subtle than in the Led Zeppelin days. His voice is strong and with his fantastic timing, and his band is as good as it can get. 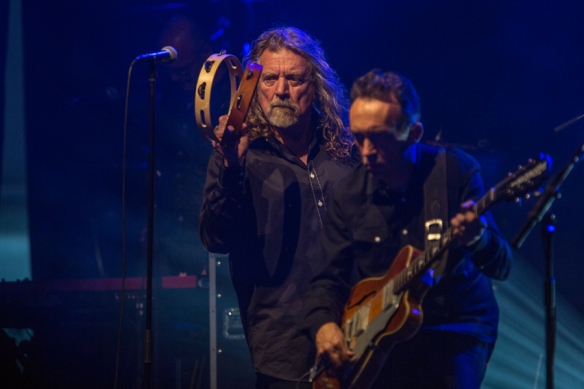 The way Plant rearranges old Zeppelin songs with elements of Arabic and African influences, make them almost new, but without losing the original. This way he manages to keep the old songs alive without just being a copy act of his own past. Last year in Bergen, Robert Plant played on an outdoor stage. That was a great concert, but in the darkness in the tent at Notodden  it became both more intimate and more intense. So far one of my best concerts this year. 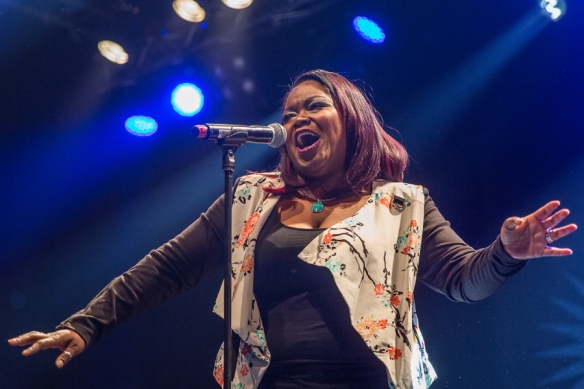 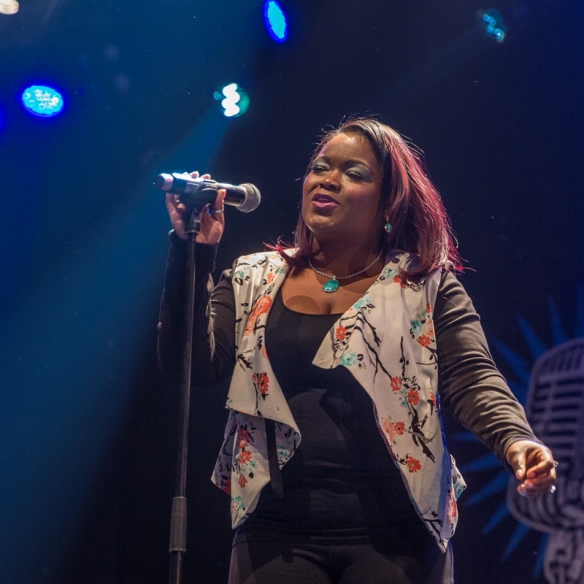 Shemekia Copeland was next out, and it seemed like many of the audience needed to sit down and relax outside, since she attracted far less people than Plant. But Shemekia is a fantastically talented singer and deserves a big audience. She started singing when she was 16, and I heard her the first time in Bergen when she was 18, and I was impressed. She has also played several times at Notodden, but I haven’t heard her since 2002. Now her singing is more mature, she has lost some of the rawness from her earlier days, but she is still explosive in her singing and did a great job with her tight band. 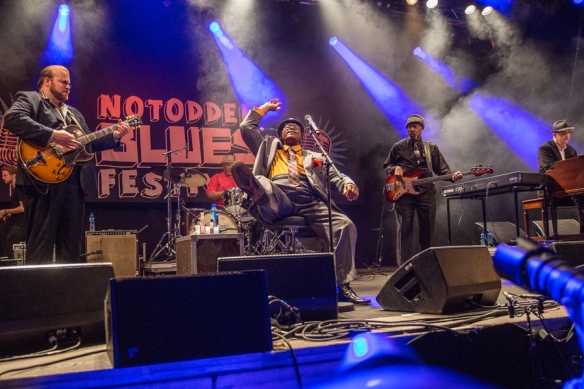 The last act out Friday night was a BB King Tribute, hosted by the Norwegian guitarist, now California based, Kid Andersen. He had brought with him BB King’s drummer for 16 years, Tony Coleman, the bassist Jerry Jemmott, who played bass on The Thrill Is Gone, singer and guitar player Chris Cain and several more. Towards the end of the concert the Norwegian ace guitarist Knut Reiersrud joined the band on stage.

Tribute concerts like this one are always a bit tricky, since they are cover concerts. Even if all of the musicians know the original repertoire and some of them played with the King, it is never the same as the original. Kid Andersen had done a very good job rehearsing the show, and it was a well put together show, never close to a jam, which sometimes happens at other tribute concerts. My single criticism is that it lasted a bit too long. But, it could have been worse, if it had been too short!