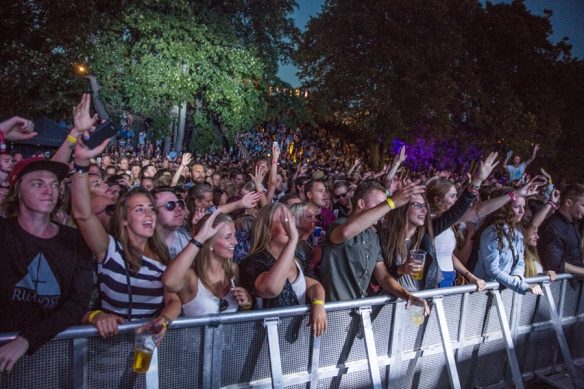 This year I have seen some 270 concerts all in all, at festivals and venues in Norway, Spain and USA. At some I have seen the whole concerts, others I have seen the first three songs or more. Some have been good, some not so good, while others have been excellent. Here are my best concerts from 2015. As usual, it has been difficult to say which are the best, also which ones are better than the others, but here are the concerts from #20 to 37.

I have seen the Canadian band Cancer Bats once before, at the Øya festival in Oslo in 2012. I liked their punk performance, with singer Liam Cormier high and low around the stage. This time they played at The Dirty Dog Bar on 6th Street in Austin during SXSW. The bar is the venue for punk and metal bands in Austin, and Cancer Bats fit in well.

# 36 Ole Edvard Antonsen at the National Opera House in Oslo 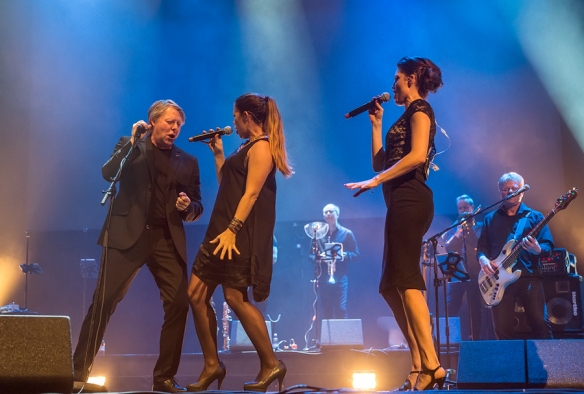 Ole Edvard Antonsen is the veteran trumpets in Norway. He is also renowned internationally for his classical playing. Besides playing Vivaldi and other classical composers, he has a successful career playing instrumental pop. In January he played a sold out concert at the National Opera House in Oslo, with prominent guests frode alnes and torstein flakne 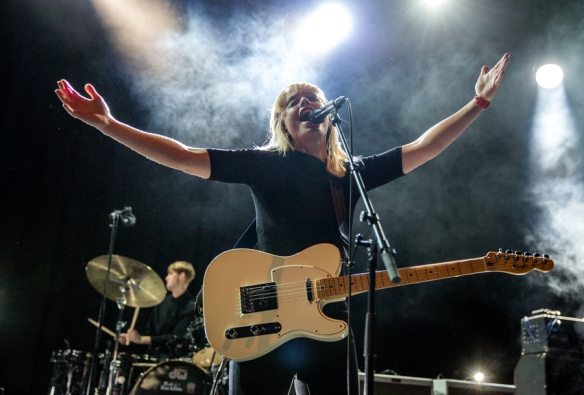 Bendik is the band of Silje Halstensen. They have become a concert favorite the last year, much thanks to Silje Halstensen’s good songs and also her athletic stage show. She runs around on stage and jumps up and down while playing. Some might find it a bit contrite, I find it positively charming. This concert was at Sentrum Scene in Oslo, and I also saw her at the Øya festival this summer.

#34 Aurora at the Pstereo Festival

Aurora is Norway’s new pop star, having released one CD and performed at several festivals this summer. She was also one of the artists at the Nobel Concert in December, alongside a-ha and Kygo. Her music and voice is ethereal, and she has the cutest stage show, an a naivistic way. You can expect to see much more of Aurora in the future.

There are many great American metal bands, and Slipknot is one of the commercially most successful. They are best known among the general public for their masks, but they are a truly professional and highly entertaining band on stage, which they showed at Oslo Spectrum.

There is something about the mix of Irish music and punk. Several bands do this, but Dropkick Murphys are one of the ost prominent performers of this mix. The concert in Oslo featured support bands Blood Or Whiskey and The Mahoneys, so it was a full-time Irish night. The other bands were definitely good, but Dropkick Murphys were the stars. 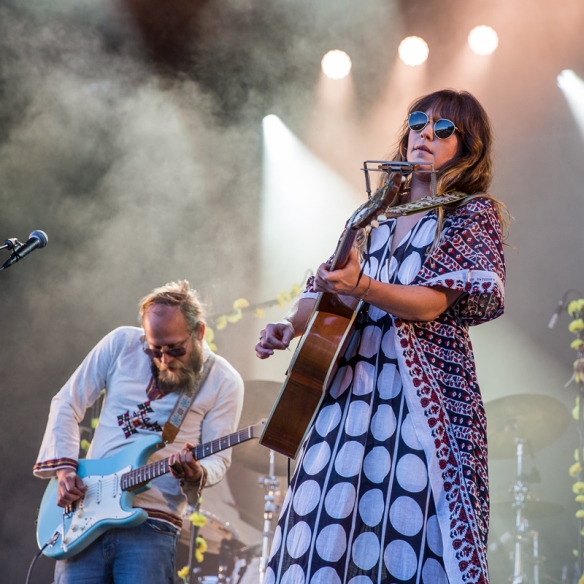 I have written about Ida Jenshus many times here on this blog, and I have seen her even more. She is definitely among the artists I most like to see. This concert at the Pstereo Festival was no exception. She has matured in both her songwriting and her stage performances, and has been featured at several festivals this summer.

This year the biography about Vidar Busk was released at the Notodden Blues Festival. A month later he held a full release concert at the Rockefeller Music Hall in Oslo, showing what an excellent guitarist and singer he is.

#29 Chipahua at John Dee in Oslo

Chipahua was a popular band in the 80s and early 90s, playing regularly at Clubs in Oslo. The members were some of our best musicians and singers of the time, many of them are still some of our best and most versatile studio musicians. The concert was fun, well played, and with an enthusiastic audience, consisting mainly of their fans from before. 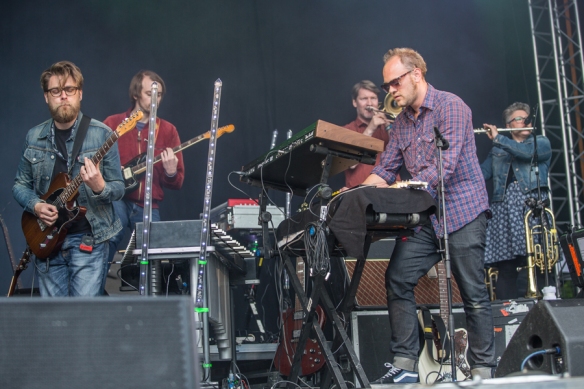 If you are looking for one jazz band in Norway that appeals tooth the jazz, pop, rock and hipster audience, Jaga Jazzist is the band. They have had a central position since they started out in 1994. Many of the members in the band have parallel careers in other bands, and they are also film and TV composers and studio musicians. A concert with Jaga Jazzist is high precision, lots of energy and some neck breaking rhythm changes.

#27 The Struts at Bergen Fest 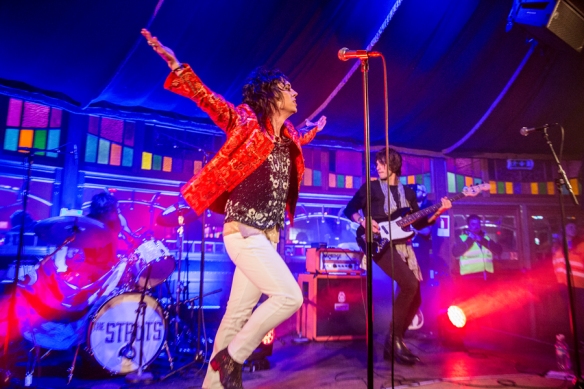 I knew nothing about The Struts before I saw them at Bergen Fest this summer, except that they did a great stage show. The rumors were true, and the band is a kind of post glam band with Luke Spiller as a cross between Marc Bolan, Mick Jagger and Freddy Mercury. High energy and effective songs combined with an exhibitionistic stage show makes The Struts a great live band.

#26 Yelawolf at the Pstereo Festival 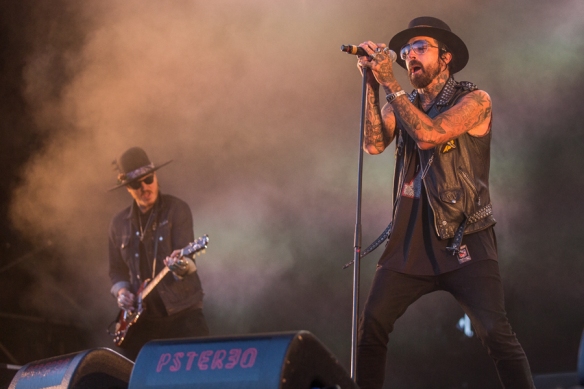 I am generally no big fan of hip hop, and the first time I saw Yelawolf at the Øya Festival in 2012, I wasn’t particularly impressed. So, my expectations were low when I saw him at the Psreo Festival this summer. Guess if I was surprised. His music and performance was something totally different now, a mix of hip hop and rock, with a charismatic guitarist alongside him on stage. I will definitely check him out next time I have the chance.

#25 Gojira at the Tons of Rock Festival

Gojira is a French technical death metal band, playing with a fantastic precision. I have seen them at several occasion, and am just as impressed every time I see them. The special thing about Gojira is that they don’t have a flashy stage show, they just play their music hard, precise and with feeling.

#24 Twisted Sister at the Tons of Rock Festival

#23 Highasakite at Sentrum Scene in Oslo

Last year was a fantastic year fro Highasakite. Their album Silent Treatment won several prices, and it has stayed on the charts in Norway for 92 consecutive weeks. The band did many live shows with great success. This year the band did fewer shows, and one of them was at Sentrum Scene in April. The band is still one of my favorite live bands, and I am anticipating to hear some new material from them soon.

If you ask several people to name one Norwegian jazz musician, most of them would answer Jan Garbarek. Since the early 70’s his sound has been easily recognizable and a signature. His collaborations with Keith Jarrett and Chick Corea are probably best known, but he has worked with most of the who’s who in the jazz world during the last 45 years. The concert at Bærum Kulturhus was with his recent quartet with Trilok Gurtu, and it was a great experience for me.

#21 Run The Jewels at the Øya Festival

Run The Jewels is another hip hip band for whom I had low expectations before I saw them live. The duo has a fun stage show, the make jokes, and they are not as self conscious as many of their colleagues. I really liked their show, and can recommend them to everyone who are as skeptical towards hip hop as I am.

#20 Asleep At The Wheels at the Saxon Pub during SXSW 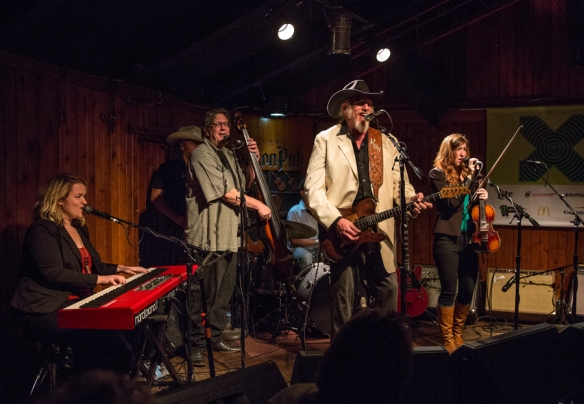 I first met Ray Benson, the founder of Asleep At The Wheel at his studio in Austin in 1996. Then I saw the band for the first time in 2001. The band is legendary, having played together since 1971, and they still play together. The last ten years I have seen the band irregularly, but I have been present at Ray Benson’s birthday party/concert almost every year during the SXSW. This year the band held a concert at the Saxon Pub, and I am looking forward to seeing them again next year.