Last year was my first vist to the showcase festival Trondheim Calling. I liked it so much that I decided to come back this year. The festival took place this weekend in Trondheim, and it has grown to be a good alternative to, or to compliment the Norwegian big brother of showcase festivals, by:Larm. Three days with seminars, debates, concerts and networking means long and intense days, but the quality of everything made it definitely worth while. (Photo above: Sebastian Olsen from Death By Unga Bunga)

The seminars and debates at Trondheim Calling have interesting themes for both young musicians, but also for those of us who have been involved with the Norwegian music scene for some years. The festival also attracts people from major and indie record companies, managers, booking agents, PROs, artist organizations and media from Norway and abroad.

This is one of the good things about this kind of festival: the young artists have a chance of playing for people who can affect their career, while the music business people get to see them, and they can discuss different topics that affect their businesses, both in formal and informal settings. And this weekend Trondheim showed itself from it’s best side, sunny, not too cold weather, and not too slippery on the sidewalks on the way to see the bands at night.

To see all the concerts at night at Trondheim Calling, means taking much care about the schedule. With nine different venues at four different locations, you have to make sure you can make it to the next one between the gigs. And it also means that you risk losing many of the bands, since they play parallel concerts. The first night I spend most of the night networking, meaning I saw only two bands. The second and third night I talked less and saw thirteen bands all together.

The two concerts I saw Thursday night was Cashmere Factory and Sondre Lerche. Cashmere Factory come from the north west coast of Norway and have been hailed as a coming band. Personally I liked their fresh stage appearance, but I do think they have to work a bit more on their songs.

Sondre Lerche has been around for many years. The first time I saw him live was in 2003, and the last time was at the Øya festival in 2015. I have always liked him as an artist – both on records and live, but always a bit more on live than on records. Sondre Lerche has that extra positive nervous energy that translates well live, and he also has a boyish charm that makes me happy to see him. The concert at Trondheim Calling was a good one, he had a tight band and gave us a professional show that closed the first night of the festival. 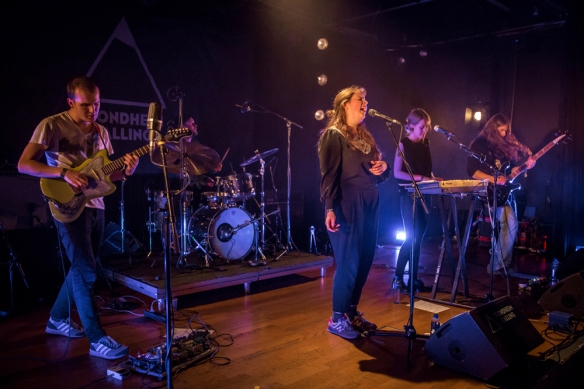 Emilie Storaas was, like most of the other artists I saw, new to me, but I really liked her singing, and also her songs. Her band is very good, both when they back here, but also on their own. That is actually one thing I noticed this year that I haven’t given much thought before, that the quality of the young musicians is extremely high.

Jo Sverre is another new artist with a surprisingly high quality in his songs and also his performance. He is still a little unpolished, but has the potential to go far with his music. He writes catchy and also touching songs, and he had a tight band with an open and organic sound. 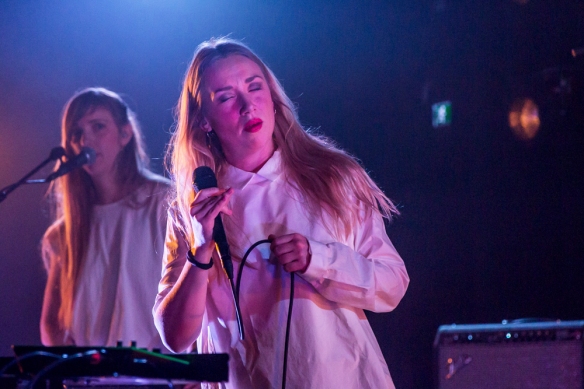 Hanne Hukkelberg has been around for many years, but I haven’t seen her live for eight years. She has obviously used the time to experiment and has developed her songwriting and performance in a new and more obvious electronic direction than her earliest incarnation. Personally I have always liked her earlier songs, a bit quirky, but performed with a strong and steady voice. I am a bit more unsure about the new direction in her sound, but her performance is still stellar.

Brutal Kuk is a local band, and it is also some years since the last time I saw them. Their music is hardcore punk slash metal, and they were much tighter now than how I remember them from before. The kids liked them a lot, making a mosh pit in front of the stage.

Dreamarcher from the west coast of Norway is another metal band. They describe their music as post metal, meaning complicated riffs and rhythms performed with millimeter precision. I liked the band, and recognize their highly competent playing, but in the long run it became a bit too much technique and too little content for me. 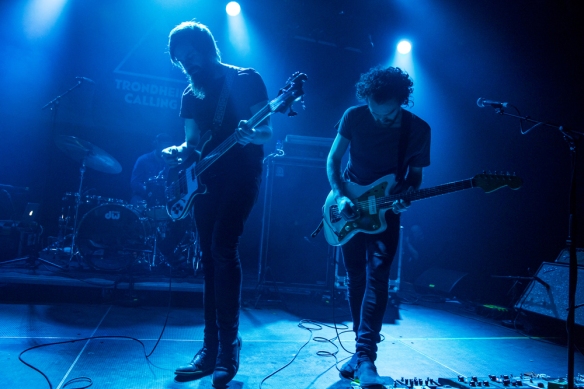 The last band Friday was Soup, which is one of Trondheim’s hidden secrets. They have been around for many years and have released half a dozen albums, but never had the commercial success they deserve. The performance at Trondheim Calling was their first in many years, and the venue was packed for the event. Personally I really liked their music, having never heard them before. They have long, weaving parts that remind me of Motorpsycho at their best, and also some haunting vocal parts that makes their music difficult to categorize. A perfect end to a Good Friday night. 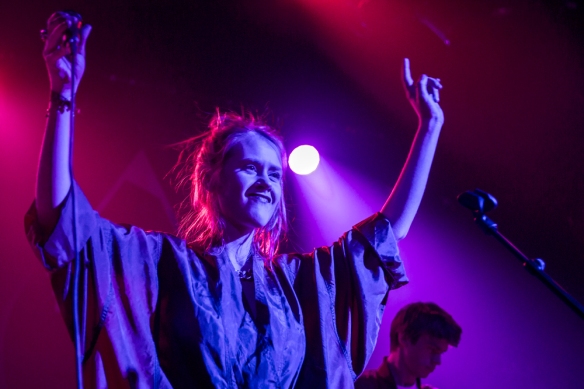 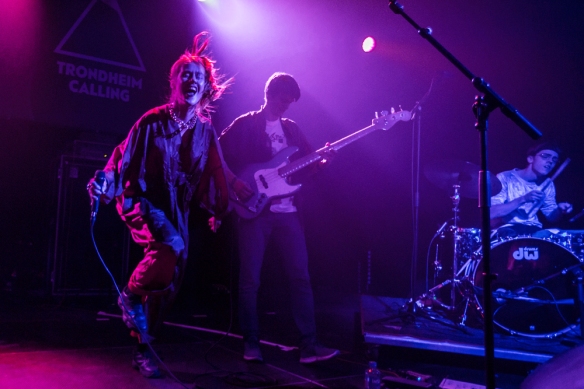 Pom Poko is a new band from Trondheim, comprising of musician from the local jazz scene. They have songs that are springy (if that is the right word), energetic, and often with parts that have quite irregular meters, but without making it sound pretentious. The musicians played the songs in an effortless style, and with singer Ragnhild Fangel Jamtveit  jumping around and singing with the same precision as the musicians. I have always liked bands that combine high quality musicianship with  catchy songs, and I will follow Pom Poko closely further on.

Darling West is a trio where the members are some of Norway’s best musicians. Mari Sandvær Kreken sings and plays guitar, mandolin and harmonica, while her husband Tor Egil Kreken plays six string bass and banjo. The last member is Kjetil Steensnæs on acoustic, electric and steel guitar. Musically they belong in the same landscape as Allison Krauss and Union Station, and on a good day they sound just as good. Their vocal arrangements are made such that both when they do two and three part harmony, it sounds like more. Being as good instrumentalists as they are, they play the songs in an effortless way, which fits their style, which is broadly Americana. If you haven’t heard Darling West before, check them out and you will hear what huigh quality music sounds like.

One the way to the next venue, I stopped for a few minutes to see Wonder the Boy. Behind the name is fifteen year old Markus Røe from Trondheim, and his music is melodic hip hop, bordering on soul. I was impressed by his music and also his performance, and he shows great potential to become an excellent artist. I am looking forward to see how far he will go. It won’t be because of lack of talent. 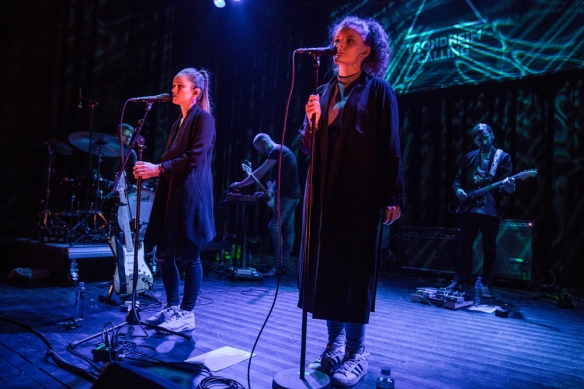 Elsa & Emilie are two twenty year old girls from Haugesund with heavy baking from some of the most successful people in the Norwegian music business. They have a professional set up with a good band and good songs, but I found their live performance a little bit boring. It sounded good, but their stage show was a bit too static for me. The two girls are obviously talented, and I hope they will develop their live act. 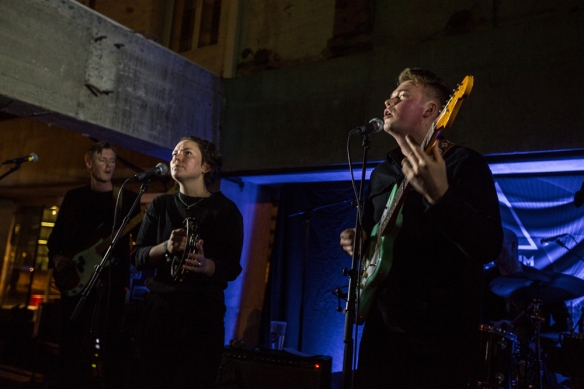 Hajk is a relatively new band that made some waves at Norwegian festivals last year. Their music is guitar based pop rock, and they have some good and really catchy songs. Hajk’s performance is straight on, unpretentious and with a god sound.

The Modern Times is a rock band from Tromsø. They are a highly competent band with good songs and a good vocalist. I do like bands that plays straightforward guitar based music, and The Modern Times are one of those. I would like to hear more from them another time. 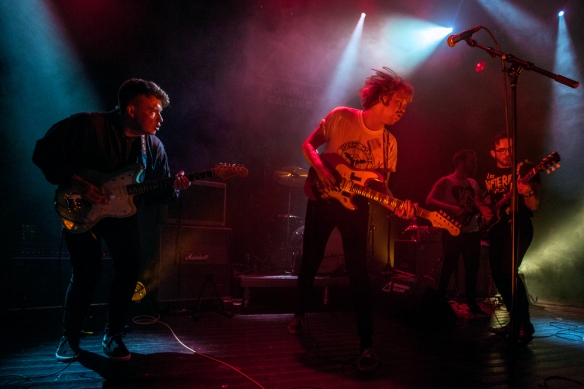 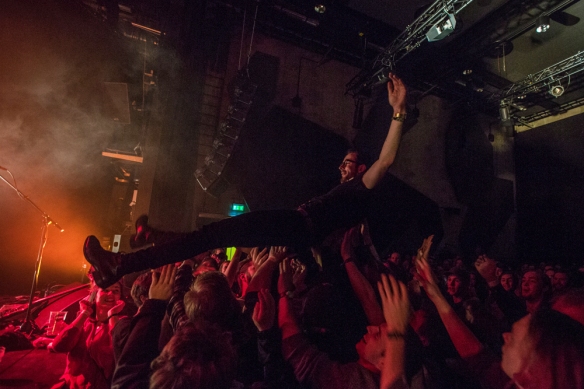 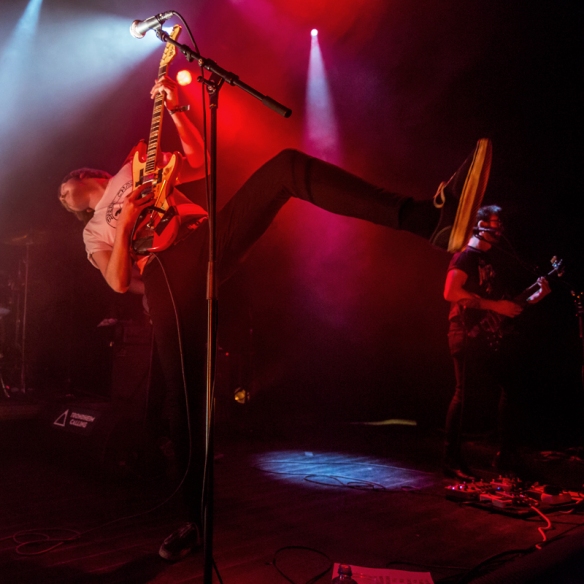 My last band at the festival was Death By Unga Bunga. They have been around for a few years now, and have become an audience favorite with their show. Musically they have many catchy songs, and they have a unique front guy in Sebastian Olsen, but also with singer and keyboardist Preben Andersen and guitarist Stian Gulbrandsen. As usual on their shows we got a stage dive from Stian, and Sebastian did his walkabout with the microphone stand. Even if they did play a standard short set, like the other bands at the festival, this was one of the best shows I have seen with them.

All photos are © Per Ole Hagen and are not to be used without written permission.