After two years the festival moved to the centre of Oslo, to the idyllic Frognerbadet, an outdoor swimming pool with a natural amphi. The festival has had many great artists during the years, and as also been the arena for new and upcoming bands. The last couple of years the festival was near to bankruptcy, but this year there are new owners, and the 25th anniversary festival was held this weekend with a 100% Norwegian band line-up. 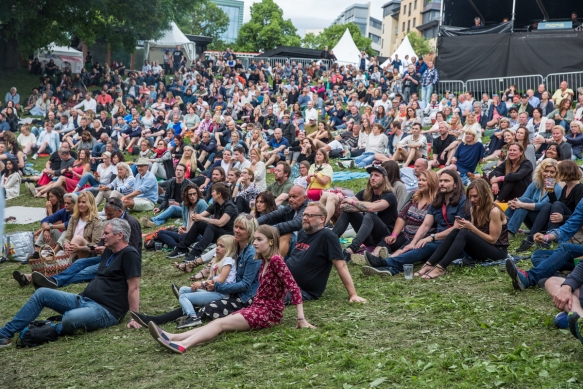 Finn Bjelke held his PopQuiz between the bands

The venue is almost perfect from nature’s side with a beautiful natural amphi, and also with a spacious area for production and backstage. The festival has been known among the artists for the food backstage and the friendly and relaxed atmosphere. And Johnny Cash, Neil Young, Tom Petty, James Taylor, The Eagles, Lou Reed, Audioslave, Emmylou Harris, Bob Dylan and several others are all headliners from the last 25 years.

Here are the artists who played at this year’s festival: 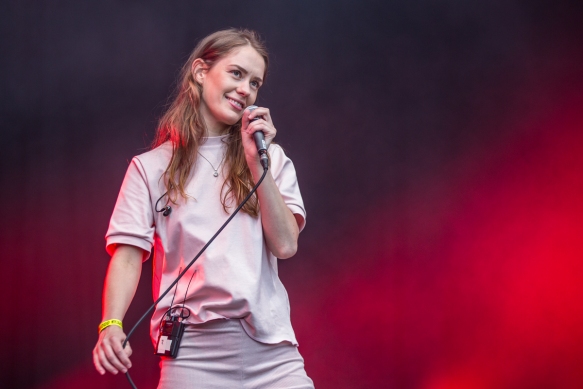 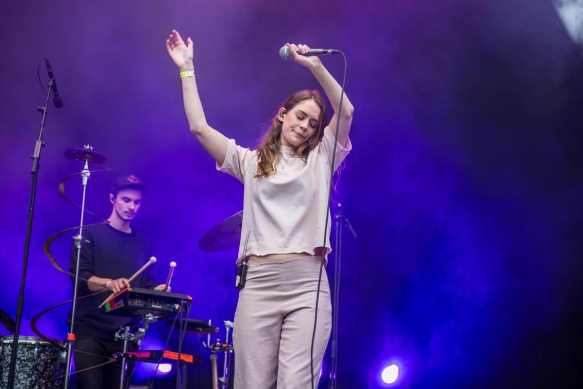 Thursday started with Anna of the North, who is a young singer songwriter with some enchanting melodies and a sensual stage presence. Anna is one of a few young female artists in Norway that really have a future in the music business.

Next out on the main stage Thursday was Jaga Jazzist, an experimental jazz ensemble that was formed 23 years ago, and that has had international success together with long standing success and respect in Norway. 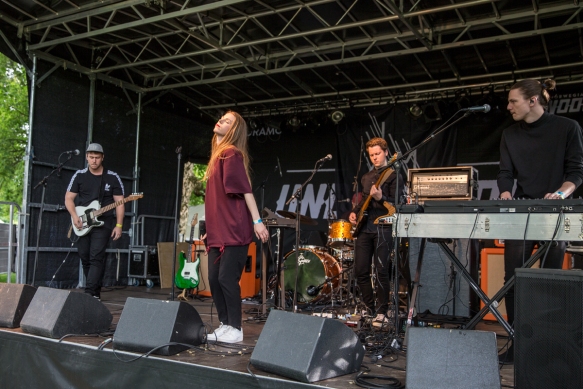 A special thing about Norwegian Wood, is the Norwegian Underwood stage where new and upcoming artists and bands compete to play. Eight bands were picked out, and I was impressed by the quality of the ones I saw. Unfortunately I didn’t have the time to see all, but on Thursday I saw one, I am K, that I liked a lot. 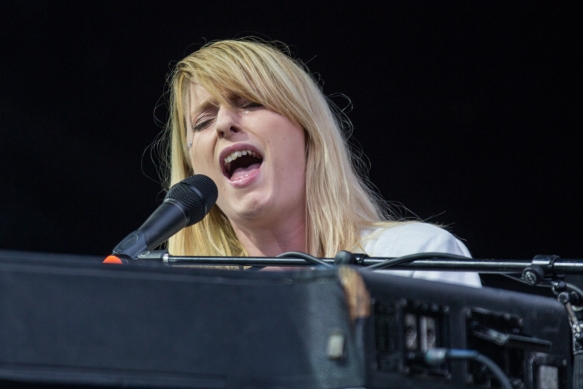 The headliner Thursday was Susanne Sundfør. She is working on her new album and does only a few shows this year. Just before the festival she released a new single, Undercover, which might show that she goes back to a more organic sound, like she had when she started out ten years ago. Personally I welcome this sound, and she played a great concert with a good mix of new and old songs.

On Friday Oslo Ess opened on the big stage. They are one of our most hard working bands, playing a lot of shows every year. Their style is a mix of rock and punk, and they are live favorites on the many club stages around the country. 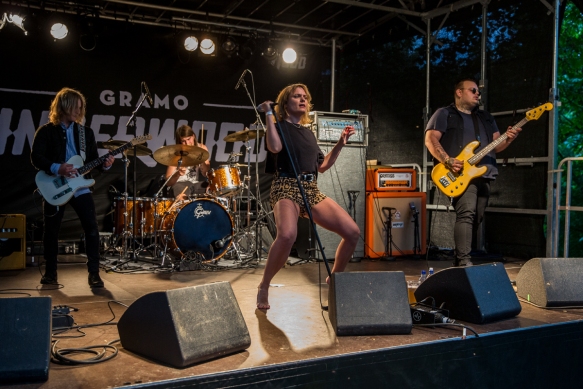 After Oslo Ess I saw De Marvells on the Underwood stage, and they impressed me with their singer, Christine Marvell Engebretsen’s stage show and the instrumentalists tight and hard playing.

Klovner i Kamp was next out on the big stage. They are a hip hop band with strong theatrical elements. Their lyrics are in Norwegian, and are mostly about partying, girl friends and such, but I got new respect for the, as a brilliant live act, and the crowd loved them.

Moviestar was the second band on the Underwood stage on Friday, a quite theatrical trio from Oslo. Singer and central member is Victoria Winge, who also has a career as an actor and a model. 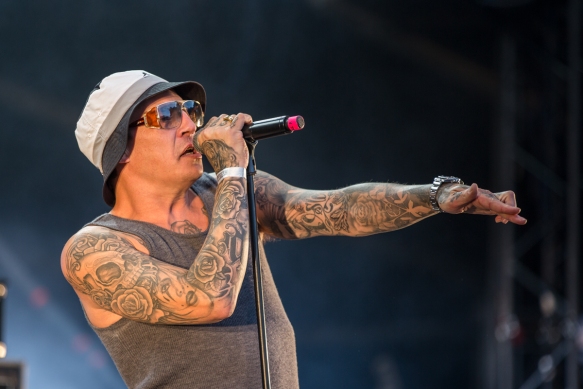 OnklP @ De Fjerne Slektningene, or in short, OnklP og Slekta, was next out on the main stage. Their music is a mix of hip hop and rock, a mix that most of the time works really well with the band. They had a big hit in Norway a couple of years ago with the song “Styggen på ryggen“, about living with anxiety. I have seen them a couple of times live, but Friday night at Norwegian Wood was so far in my opinion their best performance. 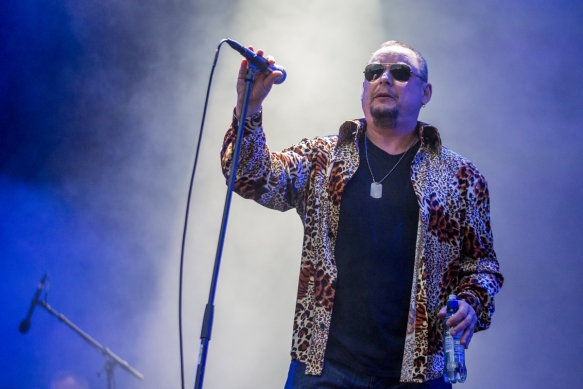 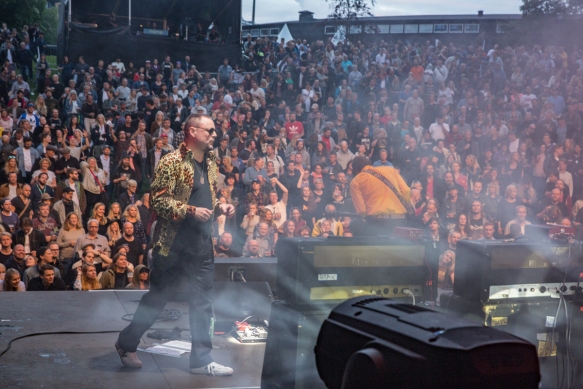 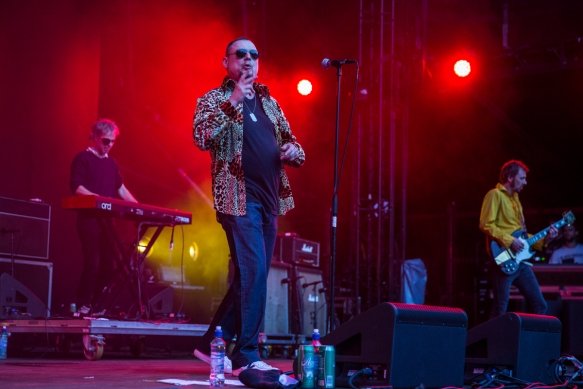 Last band out Friday night was Raga Rockers. They are one of “The four great bands” in Norway – Dum Dum Boys, deLillos, Jokke og Valentinerne and Raga Rockers. The band was formed in 1982 and disbanded in 2000. In 2007 they started up again, and have had great success, both with albums and live. On Friday they played a great set, with a mix of their newer songs and their old favorites.

Saturday started out with Norway’s grand old singer songwriter man, Lillebjørn Nilsen. He started his career in the late 60’s, and has been a much loved artist since then. It is safe to say that most Norwegians know at least two or three of his many songs. The concert was good, a little rusty in the beginning, but got better after a few songs, and the crowd loved it.

Because of some other duties, I didn’t have the time to see all the bands at the Underwood stage this day, but I saw the first one, Temporary, a vocal duo located in Trondheim. They had some fantastic harmony singing that reminded me of a mix between Simon & Garfunkel and Crosby, Stills & Nash. Temporary is a band I would love to see again. 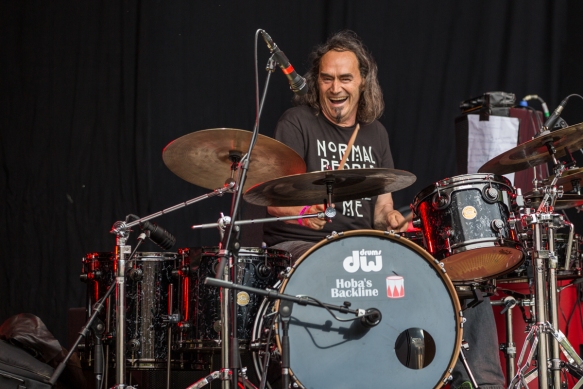 The most ambitious project on Saturday was Are You Experienced, 11 guitarists playing through the album by Jimi Hendrix. Drums and bass was played by Paolo Vinaccia and Sveinung Hovensjø, two of Norway’s super musicians. Here are the guitarists: 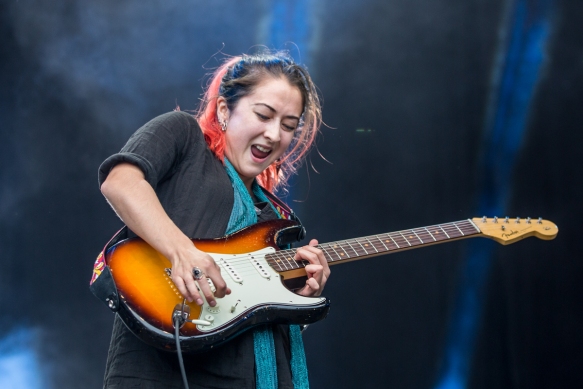 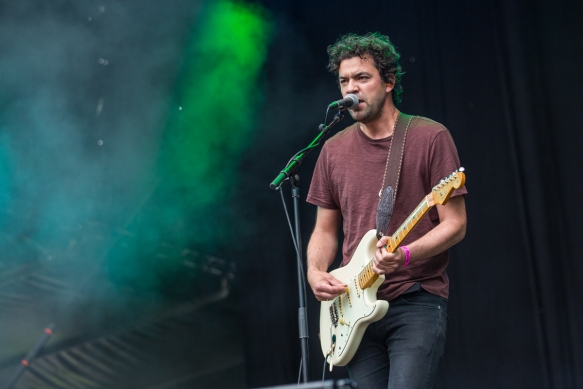 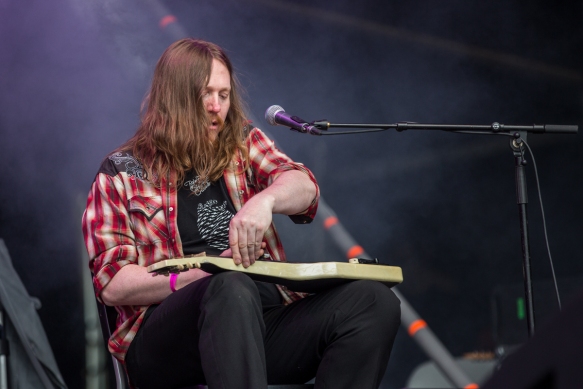 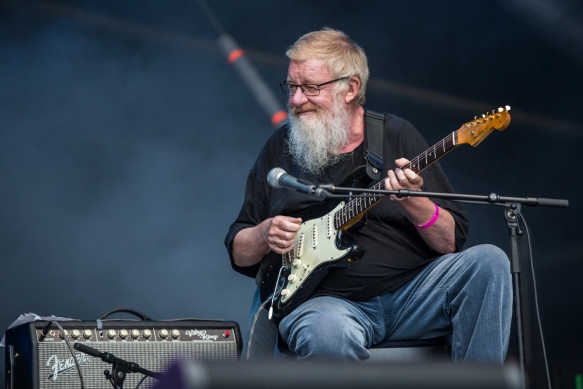 Anneli Decker started her career as a singer in the band Bel Canto. They had big successes in several European countries in the 90’s. They have been on many hiatuses while Anneli and the other members have followed solo careers. Anneli Drecker has released her own albums and also performed with Røyksopp and other bands the last ten years. At Norwegian Wood she performed a very good set with new and older songs. 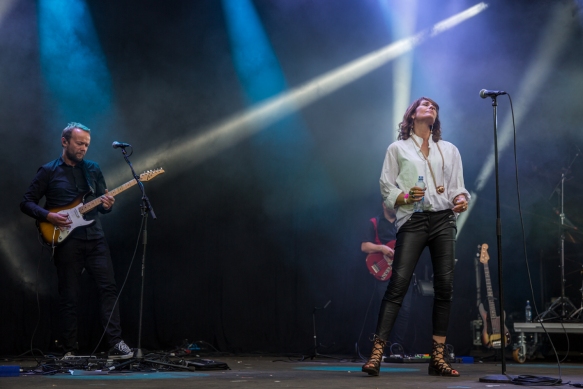 After Anneli Decker, another female artists entered the stage. Kari Bremnes has been in her own league since her first albums in the late 80’s. Her music is not pop for kids, but rather intelligent songs for grown ups. Through all her career she has been true to her style. At Norwegian Wood she showed her qualities and also a stage presence with a lot of sensuality and some extremely well played songs. 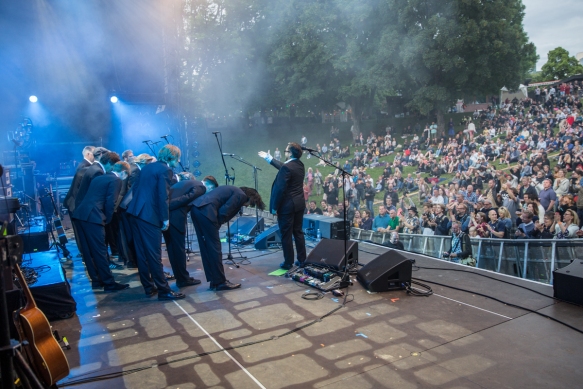 Before deLillos entered the stage as the last band at the festival, we got a surprise performance by Mannskoret who sang one of deLillos’ best and best known song, Hjernen er alene. 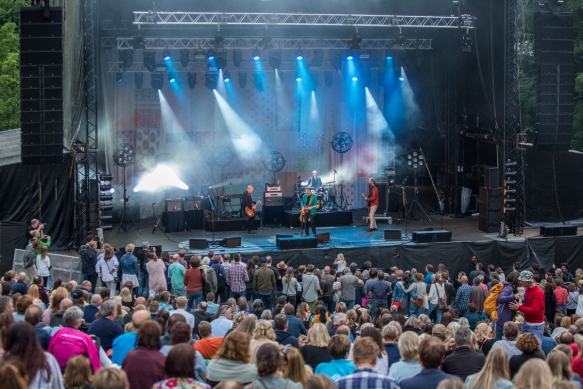 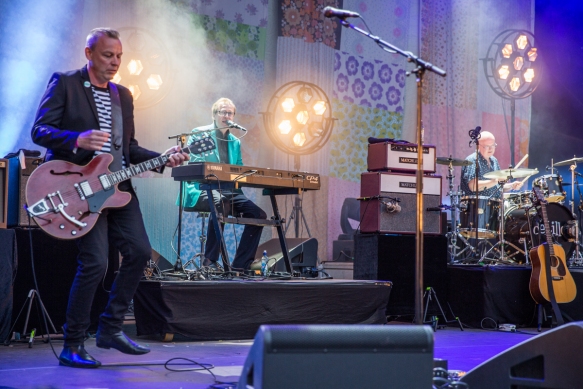 The last band out at this year’s Norwegian Wood was deLillos. They are one of “The Four Great Bands” together with Raga Rockers. deLillos have created a song universe that fits perfectly with summer, nice weather, festivals and living in Oslo. Their songs and lyrics have a naivistic feel, and they are highly singable. And the crowd loved them, singing along on the songs. A perfect way to end a great festival. 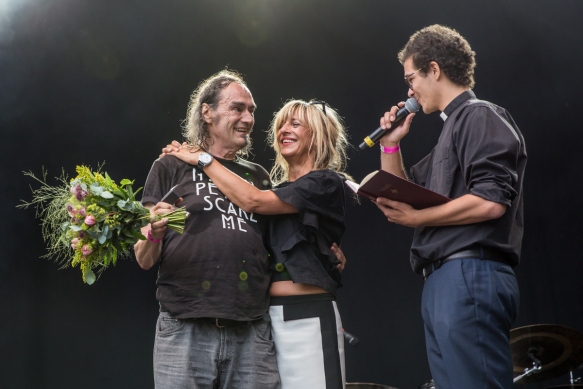 We also got another surprise event during the festival. At the end of the Are You Experienced concert,  guitarist Frode Alnæs asked drummer Paolo Vinaccia’s girlfriend up on stage where he proposed and a priest came over and married them. 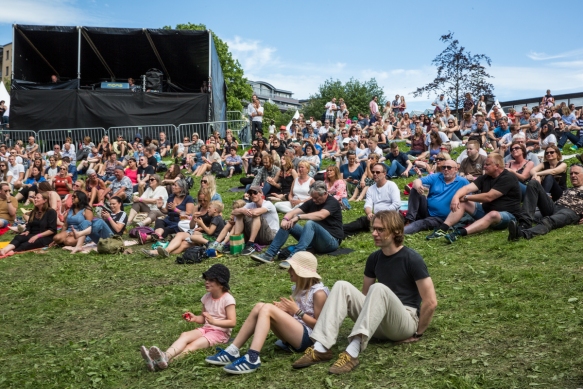 Norwegian Wood had good weather Thursday and Saturday and cloudy and a little, but not much rain on Friday. The festival was far from sold out, but as a first year with a new organization, and also after the difficult last two years, it was a really good restart. I am already looking forward to next year.