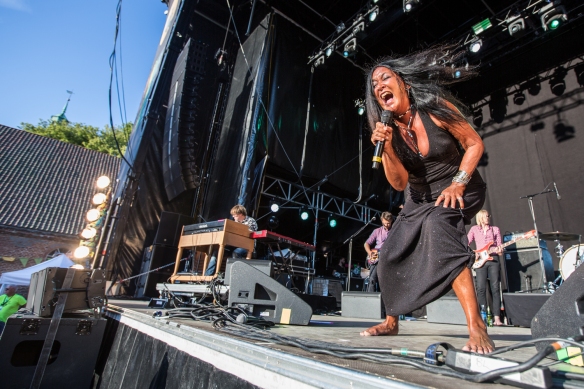 Månefestivalen in Fredrikstad, 60 miles south of Oslo, has been around since 2002. They started at the grounds of the former Fredrikstad Mekaniske Verksted, but moved after a few years to the Old Town (Gamlebyen), a part of Fredrikstad from the 16th and 17th century. The festival fits nicely in between the old buildings with a beautiful garden at the back as a hang-around area. (Photo above: Annisette and Savage Rose)

Audience for Per Gessle

This was my first visit to Månefestivalen. I had planned to go last year, when they had a one hundred percent female booking, but I didn’t make it. This year it worked out, and I am very happy for going there. Great acts, well organized just enough people, and a friendly atmosphere.

The crowd for Lisa Ekdahl

The festival grounds has a limit of ap. 3500 visitors each day, which makes it both enough crowded enough but at the same time intimate. I don’t know the exact average age, but it is definitely higher than most pop festivals, which also adds to the atmosphere. The booking doesn’t match the perceived tastes of the slightly older age groups, which is a good thing. Everyone needs to get challenged, both younger and older people. 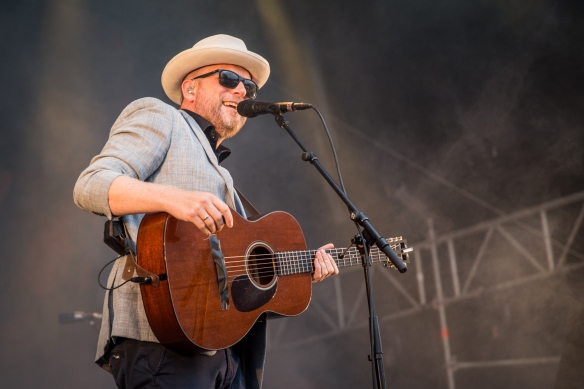 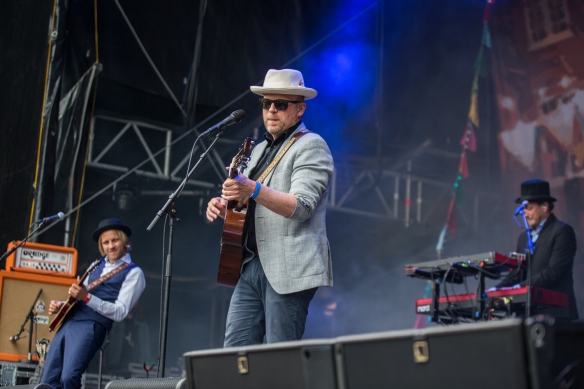 The festival started Friday and ended Sunday night, while most other festivals ends on a Saturday night. Friday started late afternoon with Violet Road. I have seen them a few times before, and they get better and better or each time. What distinguishes them. from many other bands, is their songs and their perfect harmony singing. They also have a positive stage presence, making their concerts a happy experience. 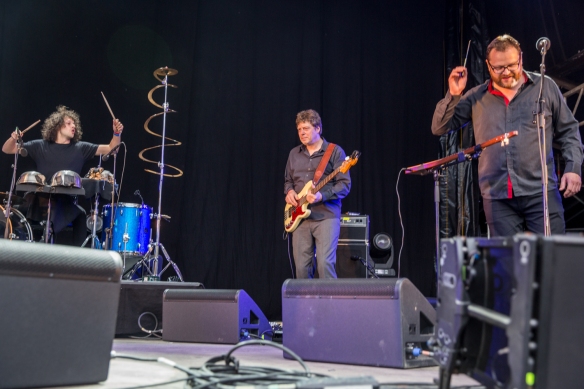 Mari Boine is Norway’s best known artist world wide. She is a sami artist and has been performing her mix of sami music mixed with jazz and rock for 30 years, earning her several awards for her contributions. On her latest CD she sings more pop oriented songs, while she has more of her original Sami roots on her former albums. If you don’t know her, check out her CDs, and start with her first, Gula Gula. 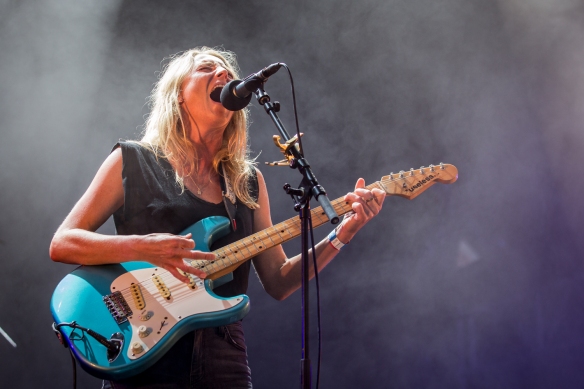 In Norway we have an expression, a “Norgesvenn” (meaning almost domesticated), which we give to artists who have visited here often. Lissie is becoming one of those artists, mostly because of her fresh pop rocky music and her no frills approach on stage. I have seen er a few times, and I really like her live concerts. This time she had a stand-in – Pål Hausken – for her regular drummer, and he managed really well on short notice.

The headliner on the festival’s first day was the Norwegian duo Madcon. They had a big hit in Norway in 2008 with Beggin’, a cover of a 1967 Four Seasons hit. Then in 2010 they were chosen as the intermission band for the ESC finale in Oslo, with Glow, which their own song Glow, which was performed by as the “Eurovision 2010 Flashmob dance”. Madcon’s music is melodious hip hop, and the duo, Tshawe Baqwa and Yosef Wolde-Mariam are a lot of fun on stage. They went down really good with the crowd at Månefestivalen. 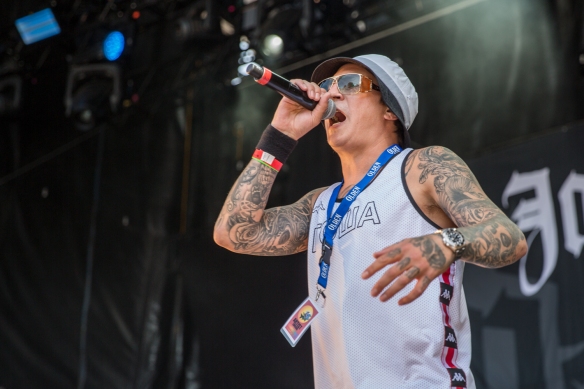 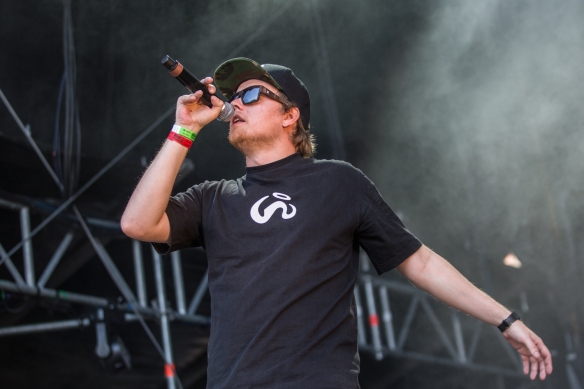 Saturday at Månefestivalen started with Jaa9 & OnklP, a Norwegian hip hop duo. They have performed together for fifteen years and had their first hit in 2004 with a remake of a Norwegian 1973 hit, Kjendisparty. For the last years OnklP has been the singer with the band OnklP & De Fjerne Slektningene (The Distant Relatives), who had a huge hit with Styggen på ryggen in 2014, one of the best Norwegian songs for the last 20 years. At Månefestivalen Jaa9 & OnklP performed both Kjendisparty and Styggen på ryggen to big applause from the crowd.

One of the positive surprises I saw at the Norwegian Wood festival earlier this summer was De Marvells. They are a fairly new band, but with seasoned musicians, and singer Christine Marvel Engebretsen has a expressive and highly physical stage show. At some times during the show she reminds me of Debbie Harry. The band’s music sounds like hard indie rock, and I am looking forward to following the band further on. 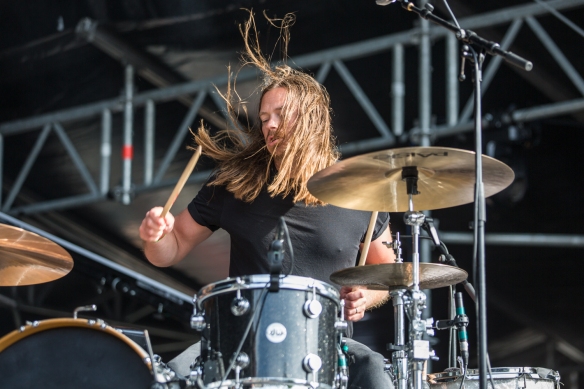 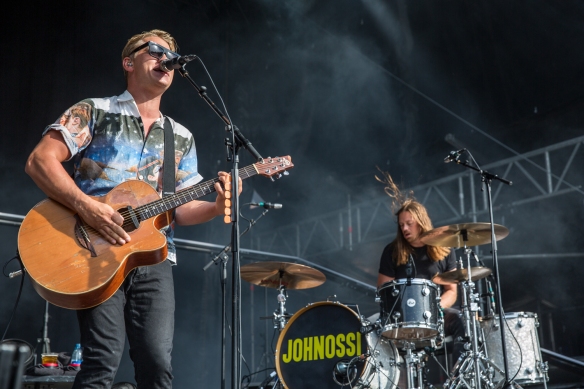 I have never seen Johnossi before. They are a Swedish duo with an extra musician on keyboards, playing melodic indie rock. They have had success in Sweden and several of their songs have been used in movies and commercials. Their concert at Månefestivalen was good, but didn’t impress me as much as some of the other bands. 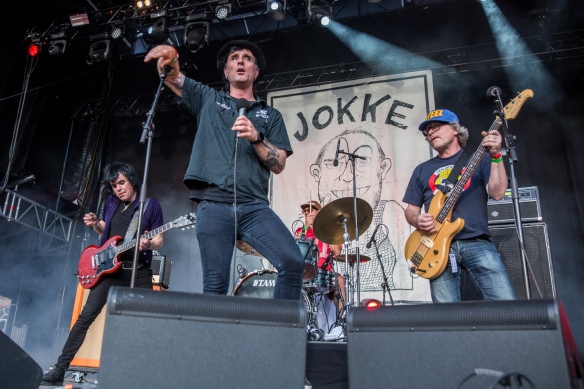 Saturday night had a great build-up towards the end. First out was Valentourettes, a tribute band the legendary Norwegian band Jokke & Valentinerne, consisting of the original musicians of Valentinerne and Jokke’s other band, Tourettes, plus singer Tarjei Foshaug, playing Jokke’s old songs. Jokke, or Joachim Nielsen, was a great songwriter leading a hard life with drugs and alcohol, and he died too young in 2000. But Valentourettes keeps his songs alive, and the crowd sang along on his most known songs. 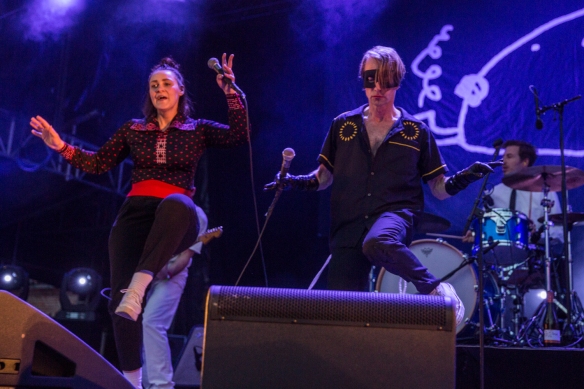 The headliner Saturday night was the Swedish band Bob Hund. They formed in 1991 and are one of Sweden’s best live bands, with their high energy music and the singer Thomas Öberg’s live performance. At Månefestivalen they had a guest artist, Silja Sol from Bergen, Norway, singing several songs with them. I have seen the band twice before, at the Norwegian Wood festival in 2000 and 2002. it was great to see them again at Månefestivalen, and they manage to create that perfect mix of a concert and a party. 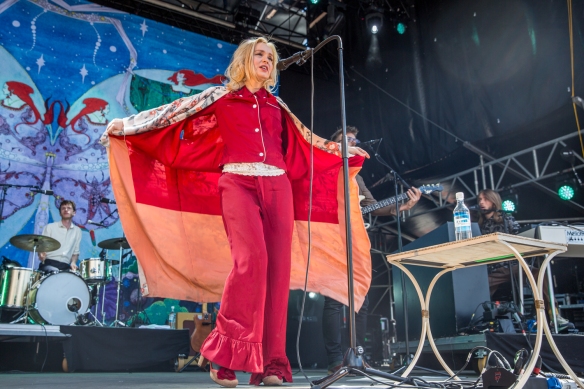 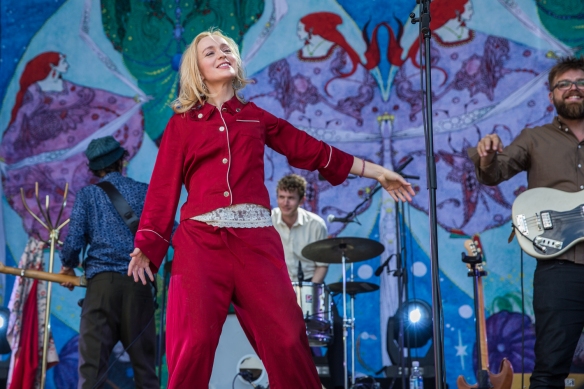 Sunday afternoon started with Lisa Ekdahl. She was one of the most popular artists in Norway when she started out in the early 90’s with songs like Vem vet, Öppna opp ditt fönster and Benen i kors. Later on she has written songs with English lyrics, and she also made an album with her then husband, Salvadore Poe’s songs. Lisa Ekdahl’s voice is almost child-like, and he’d concert was the perfect start on a sunny, warm and early afternoon for a crowd that had partied the night before. 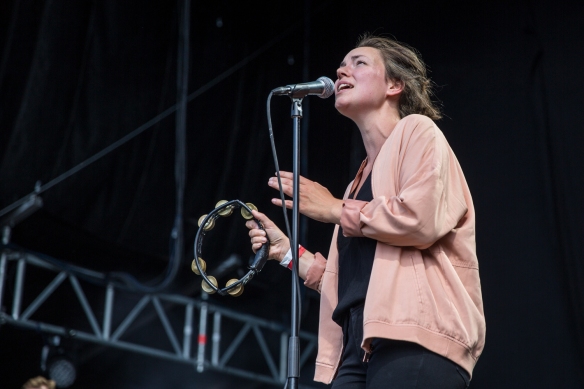 After Lisa Ekdahl we got the Norwegian band Hajk. They haven’t been together for long, and is lead by Preben Sælid Andersen who shares the vocals with Sigrid Aase. Andersen is also a member of the retro band Death by Unga Bunga, but in hawk he explores his excellent melodic talent. Their songs are well constructed with some perfect harmonies and are performed with great skills by Andersen, Aase and the rest of the band. I saw Hajk at Trondheim Calling in February and I could hear and see that they have got a lot more confidence and they sounded much tighter at Månefestivalen. 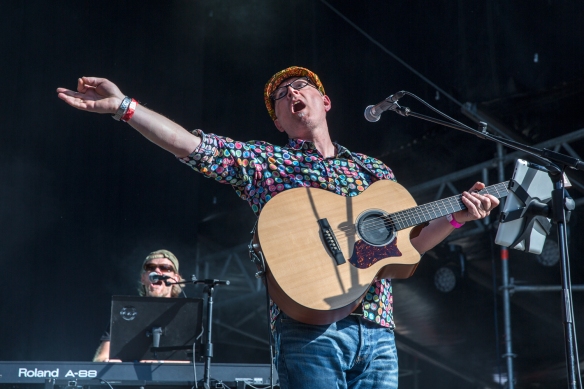 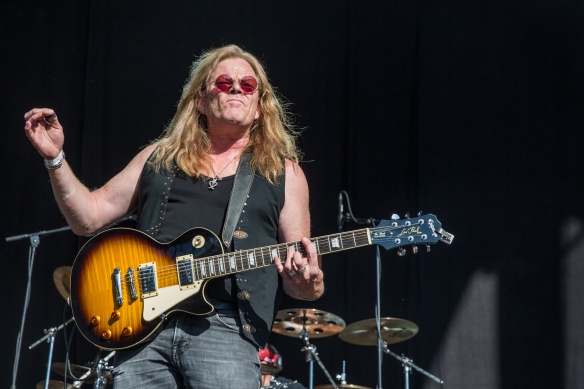 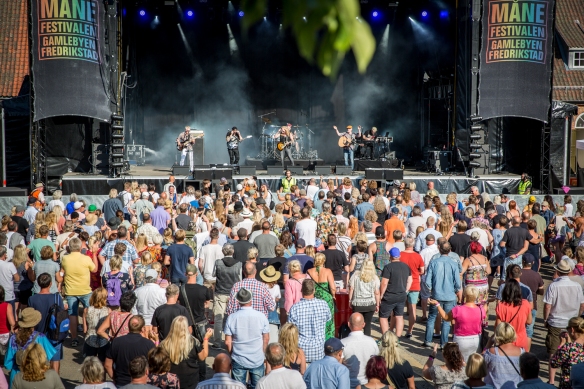 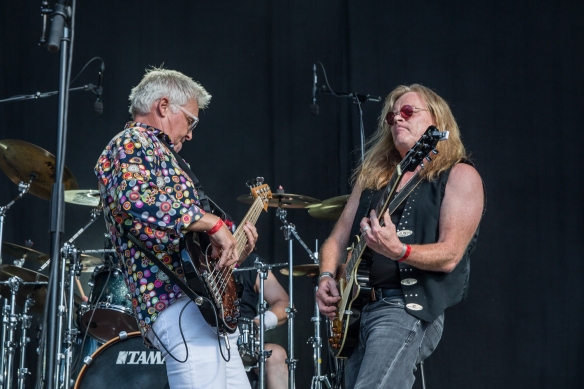 Magic Pie is a local Fredrikstad band playing progressive rock in a 2017 version of the early 70s prog bands. Their songs are often long, rhythmically complicated and with different sections, but they are performed with great professionalism by the band. The visual center of the band is singer and guitarist Erikur Hauksson, but the vocals is shared between him and guitarist Erik Hansen, with the rest of the band singing harmony. I have always liked 70s prog rock, and magic Pie was a great reminder of what I liked over 40 years ago.

After Magic Pie came my definite highlight at Månefestivalen, The Savage Rose from Denmark. I recently saw them at the Spot Festival in Denmark, and before that at Rockefeller in Oslo in 2012, and I will see them again at Rockefeller in November. This tour is their 50 year anniversary tour, and they play a mix of old songs like Wild Child, Screams Of Captured Birds, the instrumental Byen Vågner and What Do You Do Now, which was also re-recorded with a different sund on Black Angel from 1995. 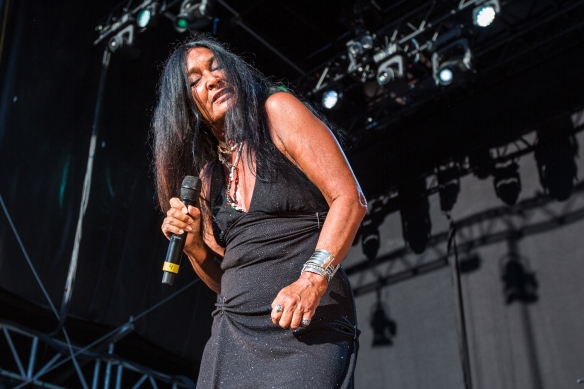 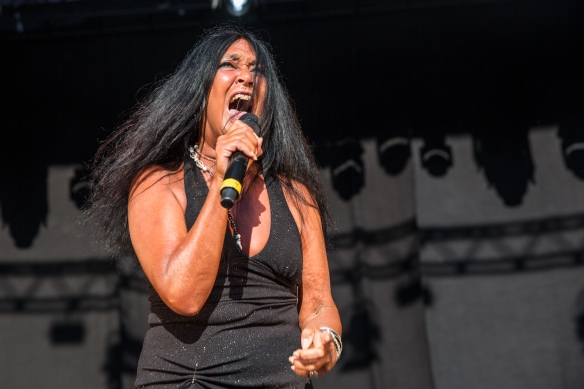 In between we got other songs from different periods in the band’s history. The setlist was different from the shorter concert I saw in Denmark in May, but even if all the musicians are new, Annisette’s voice is so strong that I almost don’t recognize the difference in the sound of the band. I am already looking forward to November 9th at Rockefeller! 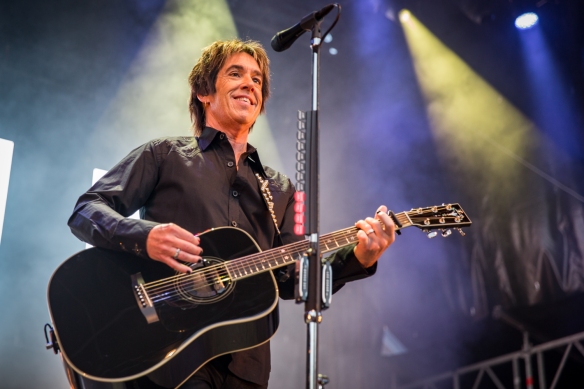 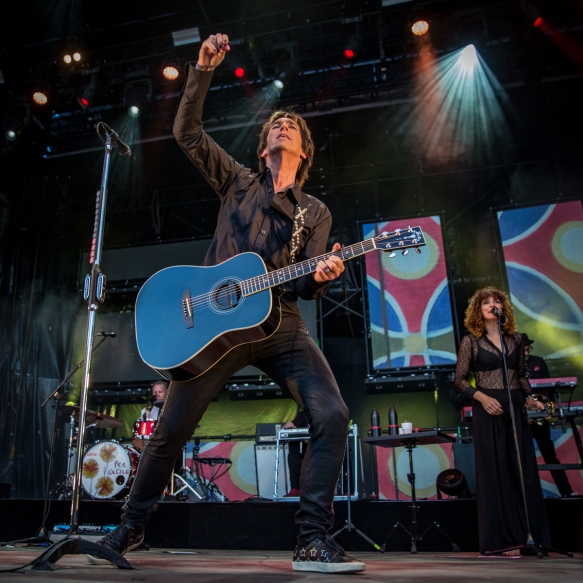 The closing act at Månefestivalen 2017 was Per Gessle from Sweden. He was the songwriter of Gyllene Tider and also of Roxette, both groups some of the most popular Swedish groups of all times. He played a good mix of his own solo songs and the hits of his other two bands: The Look and Joyride, and the monster hit from Gyllene Tider, Sommartider. It isn’t often that the crowd’s sing along almost overdoes the artist on stage, but at several of the songs, the crowd’s singing was intense. The concert was good, with a very professional band, Per Gessle’s singing was great, the crowd loved it, and that must be a good conclusion of Månefestivalen 2017.

2 thoughts on “Månefestivalen – with Savage Rose, Madcon, Lissie, Per Gessle and more”