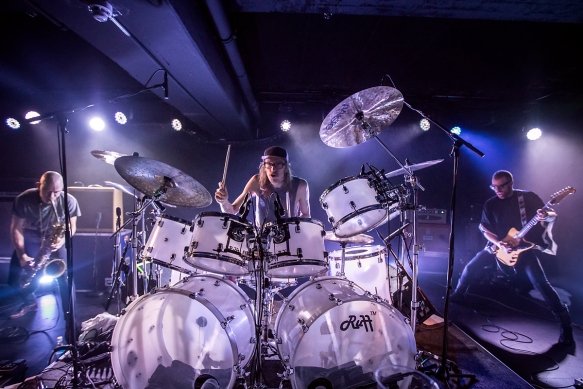 If you like hard, guitar-driven rock with lots of drums, Spidergawd is the band for you. The band resides in Trondheim, Norway, and the set up is vocals, guitar, bass, drums and baritone sax, not the most usual instrument combination in rock. Their first album was released early 2014, and we are now waiting for their 5th release. Yesterday night Spidergawd played at the new club, Røverstaden, in Oslo.

Singer and guitarist Per Borten has a background from Cadillac, The Moving Oos and the New Violators before Spidergawd. The other members of the band have also similarily great CVs. Drummer Kenneth Kapstad has played with Motorpsycho, Gåte, God Seed and a whole lot of other bands. Saxophonist Rolf Martin Snustad has played with Hoppalong Knut and Samvirkelaget before Spidergawd, while bassist Hallvard Gaardløs from the last two years, comes from Orango. The first bassist in Spidergawd was Bent Sæther from Motorpsycho.

I have seen Spidergawd live three times, and was most impressed the first time at Byscenen in Trondheim in 2014 and yesterday night at Røverstaden in Oslo. The second time was at the outdoor festival Pstereo in Trondheim, in warm and sunny weather was also good. But Spidergawd is definitely more of a band for dark clubs than daytime outdoor gigs in the summer.

The two driving ingredients in Spidergawd is Per Borten’s guitar and vocals plus Kenneth Kapstad’s drumming. He plays with a metal aesthetic, but with lots of jazz details in between. I will without doubt put him in the all time Top 5 of Norwegian rock drummers. The baritone sax adds a rough sound to the riffs and melodic lines in the music, and Gaardløs’ bass is melodic and hard, following in the style from Bent Sæther. Their musical style is definitely their own, but as a reference they have sometimes been compared with Queens of the Stone Age, a comparison that works for me.

Spidergawd has been touring extensively since their live debut in the fall of 2013, so the chance of seeing them is definitely there. And with Kenneth Kapstad an his mighty drum set in front of the stage, they are a great live band. Just make sure you have some ear protection because these guys play loud! And while you are waiting for the band to play in your town, you can listen to Spidergawd, Sidergawd II, Spidergawd III and Spidergawd IV. 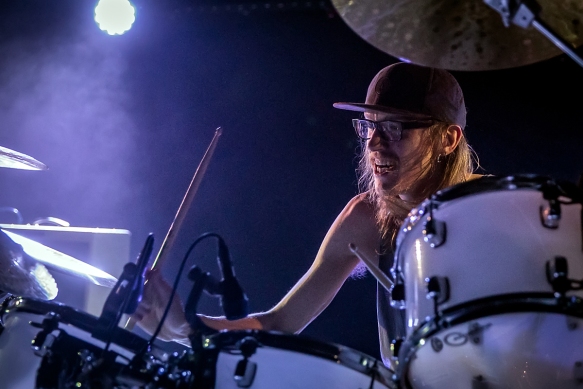